Worse than Watergate. That’s the refrain coming from the Obama administration’s critics as it scrambles to tamp down a growing pile of scandals. “The Obama administration’s cover-up of the September 11, 2012, Benghazi terrorist attack surpasses Watergate,” states Rep. Steve King (R-Iowa). The IRS-tea party scandal “is far worse than Watergate,” according to Rep. Michele Bachmann (R-Minn.). And Pinal County, Arizona, Sheriff Paul Babeu maintains that Fast and Furious “is a much larger scandal than Watergate.” And of course there is a hashtag: #WorseThanWatergate.

Comparing the scandal du jour to Watergate is an easy way to score political points. (Conservatives aren’t the only guilty ones here.) But if you’re interested in making a more subtle and perhaps accurate comparison, you need only refer to the United States’ long history of White House scandals, starting in the first days of the republic.

To help you keep track of them, we’ve plotted more than 25 on this matrix, organized by their relative seriousness and their place in our current collective memory. (The current crop of Obama scandals aren’t on there since it’s not yet clear where they fall on the continuum between, say, Billygate and Iran-Contra. See a missing scandal? Suggest it in the comments.) 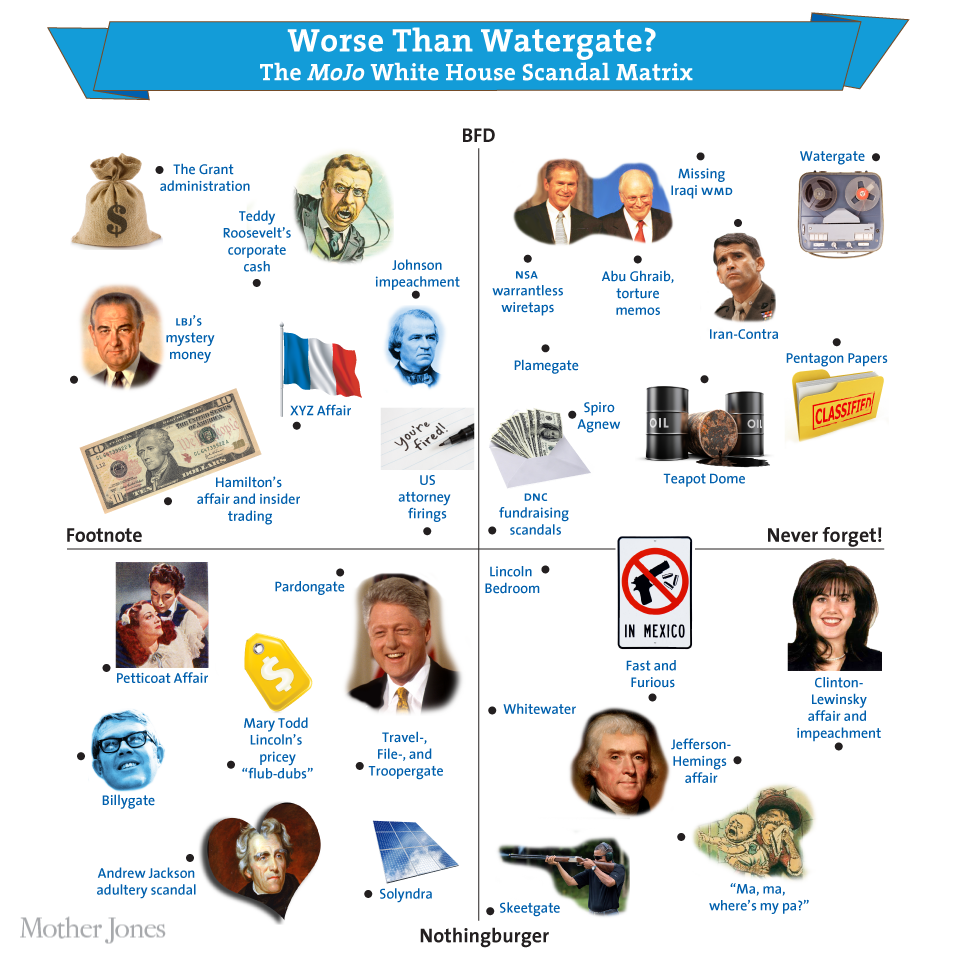 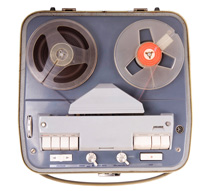 Watergate: The mother of all White House scandals. It had everything but sex: A burglary, spying on political opponents, secret tapes, an enemies list, obstruction of justice, campaign finance shenanigans, ominous-sounding acronyms (CREEP), memorable denials (“I am not a crook”), congressional investigations, crusading journalists, articles of impeachment, and the first resignation of a sitting president. Beat that, Benghazi.

Spiro Agnew: Before Richard Nixon stepped down, he was preceded by his alliteration-prone vice president, who had been charged with taking bribes and evading taxes. Agnew insisted until the very end that the “hopeless, hysterical hypochondriacs of history” had gotten it all wrong.

Iran-Contra: High-ranking officials in the Reagan Administration made an end-run around federal law by secretly selling missiles to Iran in order to help free American hostages in Lebanon and fund the Nicaraguan contra rebels. What could go wrong?

Missing Iraqi WMD: President George W. Bush and top members of his cabinet insist that Saddam Hussein is definitely almost nearly developing and or amassing weapons of mass destruction which he might probably absolutely use against us. The United States launches a preemptive invasion of Iraq. Ten years, tens of thousands of deaths, and billions of dollars later, the search for the elusive WMD continues. 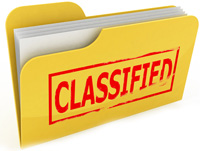 Plamegate: After former ambassador Joe Wilson blew the whistle on the Bush White House’s claims of Saddam’s pursuit of nuclear materials, his wife, Valerie Plame, was outed as a CIA agent. The subsequent investigation leads to the conviction (and pardon) of Vice President Dick Cheney’s chief of staff, “Scooter” Libby.

Abu Ghraib, torture memos: Prisoner abuse at American military prisons in Iraq and Afghanistan and the CIA’s extradition and torture program were authorized by Bush and top administration officials. But that’s all behind us now.

Pentagon Papers: A secret Pentagon history of the Vietnam War leaked by whistleblower Daniel Ellsberg revealed that the Johnson administration had been lying about the true scope and of the war. The Nixon White House tried to prevent their publication.

Teapot Dome: Before Watergate, there was Teapot Dome, the early 1920s scandal that led to President Warren G. Harding’s secretary of the interior being convicted for accepting bribes from oil companies to lease Navy petroleum reserves in Teapot Dome, Wyoming.

DNC campaign finance scandals:  In 1996, Vice President Al Gore attended an event at a California Buddhist temple that illegally funneled $65,000 to the Democratic National Committee. Eventually, the party had to return nearly $3 million in forbidden gifts, some from foreign donors such as James Riady, an Indonesian businessman who was fined $8.6 million.

Johnson impeachment: Disputes between President Andrew Johnson and Radical Republicans in Congress spun into a constitutional crisis when the House voted to impeach him in 1868. He survived in the Senate—by one vote.

Teddy Roosevelt’s corporate cash: After winning election as a trust-buster in 1904, Roosevelt and the Republican Party are revealed to have quietly courted big corporate donors.

The Grant administration: President Ulysses S. Grant’s terms were marred by a succession of high-level scandals, including the Whiskey Ring, Belknap affair, the Delano Affair, the salary grab, and the Cattelism scandal. The administration’s endemic corruption became known as “Grantism.” 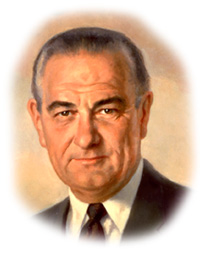 LBJ’s mystery money: In 1963, Life magazine was preparing a bombshell exposé on how Vice President Lyndon Johnson had amassed a fortune through his connections to Texas oil barons. The article, which biographer Robert Caro says would have linked LBJ to the Bobby Baker Scandal, was set to drop in late November. Kennedy’s assassination killed the story and a planned Senate investigation.

XYZ Affair: A diplomatic kerfuffle led to an undeclared “Quasi War” between the United States and France in the late 1790s. Back home, it led to passage of the draconian Alien and Sedition Acts and fueled the growing split between President John Adams and Thomas Jefferson.

Hamilton’s affair and insider trading: In 1797, former treasury secretary Alexander Hamilton revealed that he had carried on an affair with a married woman—while bribing her husband to let it to continue. He also defended himself against accusations of having used his position to engage in insider trading.

US attorney firings: In 2007, Attorney General Alberto Gonzales resigned amid an investigation into whether the firing of nine US attorneys in 2006 was politically motivated.

Pardongate: As he left the White House in January, 2001, President Bill Clinton hastily pardoned Susan McDougal (for contempt of court during the Whitewater case), his brother Roger (for old drug charges), and Marc Rich, a fugitive tax cheat whose wife had been a major Clinton donor. 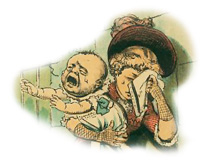 Lincoln Bedroom: The Clinton White House provided perks to big donors including stays in the Lincoln Bedroom as well as coffees, golf outings, or morning jogs with the president.

“Ma, ma, where’s my pa?”: “Gone to the White House, ha ha ha!” This catchy slogan followed Grover Cleveland after he won election in spite of reports that he had fathered an illegitimate child.

Clinton-Lewinksy affair and impeachment: “I did not have sexual relations with that woman,” the hug, the blue dress, Ken Starr, “it depends on what the meaning of ‘is’ is.” Good times.

Fast and Furious: A botched ATF operation birthed a conspiracy theory that the Obama administration was coming for Americans’ guns.

Jefferson-Hemings affair: Thomas Jefferson was dogged by rumors that he had fathered children with a slave who served as his “concubine.” Jefferson never addressed the allegations, but it is now known that Sally Hemings had six of Jefferson’s children. 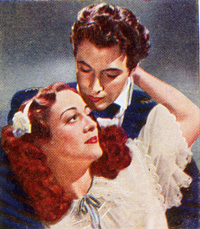 Petticoat Affair, a.k.a. the Eaton Affair: Ridiculous by modern standards, this scandal rocked Washington when Andrew Jackson’s secretary of war married a widow too soon after the death of her husband. It led to the resignation of most of the cabinet and was immortalized in the 1936 film, The Gorgeous Hussy, starring Joan Crawford.

Skeetgate: After President Obama says that “at Camp David, we do skeet shooting all the time,” skeptics demand proof. A photo of the president shooting is produced; the skeptics insist it’s faked.

Andrew Jackson adultery scandal: Forty years after he wed his wife Rachel, presidential candidate Jackson was attacked for marrying her before her divorce from her first husband was finalized, making Old Hickory an adulterer and the first lady a bigamist. He blamed the smear campaign for causing her death shortly after he took office.

Solyndra: The federal government gave more than $500 million to a solar firm that went belly up. Even congressional inquisitor Rep. Darryl Issa (R-Calif.) eventually had to concede there was no there there. 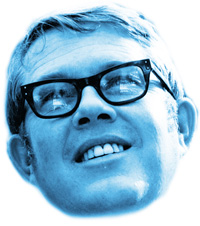 Billygate: President Jimmy Carter took major heat when it was revealed that his ne’er-do-well brother Billy had received payments from the Libyan government.

Mary Todd Lincoln’s price “flub-dubs”: When Abraham Lincoln assumed the presidency, the first lady set about remodeling the White House, but went over budget by $7,000. As complaints of her profligacy spread, the president wrote, “It would stink in the nostrils of the American people to have it said that the President of the United States had approved a bill overrunning an appropriation of $20,000 for flub-dubs for this damned old house when the soldiers cannot have blankets.”