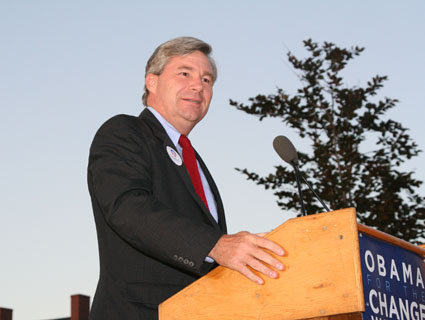 The Senate confirmed Sylvia Matthews Burwell as the new director of the White House Office of Management and Budget (OMB) at the end of April. Now Democrats in the House and Senate are calling on her to fix whatever’s been delaying all the environmental, health, and safety rules at OMB for months (and in some cases, years).

As I’ve reported here before, Obama’s OMB is a place where tough environmental and health rules go to die (or at least disappear for a really, really long time). On Wednesday, Sens. Sheldon Whitehouse (D-R.I.), Tom Harkin (D-Iowa), Ben Cardin (D-Md.), and Richard Blumenthal (D-Conn.), along with Dem Reps. Henry Waxman of California and Ed Markey of Massachusetts, wrote to Burwell asking her to cough up the rules that the lawmakers said had “languished” in OMB’s Office of Information and Regulatory Affairs under her predecessor:

Fourteen of the twenty rules submitted by the Environmental Protection Agency (EPA) have been under review at OIRA for more than 90 days; thirteen have been delayed for more than a year. One particularly egregious example of OIRA delays is EPA’s Guidance Identifying Waters Protected by the Clean Water Act. This guidance would clarify regulatory jurisdiction over U.S. waters and wetlands. It is an issue that has come before the U.S. Supreme Court three times and, until the Administration finalizes this guidance, will continue to create confusion, loopholes, and inconsistency for officials at the state and local level. Despite the clear need for regulatory guidance from this Administration, EPA’s final guidance has been under review for 470 days, since February 21, 2012.

Nine of the ten Department of Energy (DOE) rules under review at OIRA have been there for more than 120 days. Important DOE energy efficiency standards, such as those for commercial walk-in coolers and freezers, commercial refrigeration equipment, and metal halide lamp fixtures have been pending at OIRA for more than a year.

Similarly, key worker safety standards have also been delayed for far too long. The Occupational Safety and Health Administration’s (OSHA) proposed rule to protect workers from cancer-causing silica dust has been at OIRA for over two years, since February 14, 2011. OSHA’s preliminary analysis indicates that the silica rule would prevent approximately 60 deaths per year from lung cancer and silicosis. According to the Centers for Disease Control and Prevention, an estimated 1.7 million additional workers are exposed to dangerous levels of silica every year. These workers may also face a lifetime of serious health problems that the completion of this rule could help to prevent.

As the congressmen noted, very few laws get passed in Congress these days. That means “the public is depending on the federal agencies to protect public health and welfare,” they wrote.