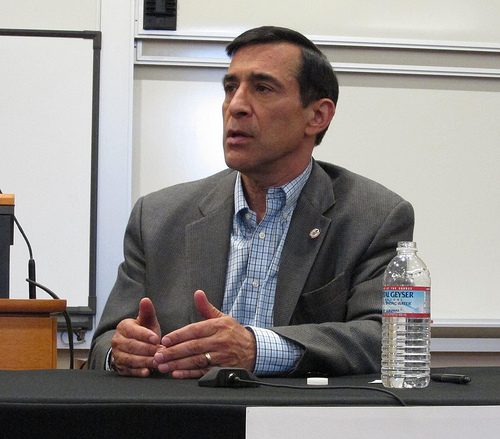 Despite the claims of Obama administration officials, the IRS scandal is not the fault of “rogue” staffers in Cincinnati, according to Rep. Darrell Issa (R-Calif.). No, the chairman of the House oversight committee charges—despite the paucity of evidence backing him up—that it leads all the way back to the agency’s headquarters in Washington.

On CNN’s State of the Union on Sunday, Issa made some of his strongest claims yet that top IRS brass knew of, if not directed, the targeting of right-leaning groups applying for tax-exempt status for special scrutiny. Issa also ripped Obama administration officials for denying that the IRS scandal reaches back to Washington.

“The administration is still trying to say there’s a few rogue agents in Cincinnati, when in fact the indication is they were directly being ordered from Washington,” Issa said.

He called White House Press Secretary Jay Carney the administration’s “paid liar” while accusing him of dissembling about the extent of the IRS scandal. Carney, Issa said, is “still making up things about what happens and calling this a local rogue. The reason that [IRS director] Lois Lerner tried to take the Fifth [Amendment when asked to testify before Congress] is not because there’s a rogue in Cincinnati. It’s because this is a problem that was coordinated in all likelihood right out of Washington headquarters. And we’re getting to proving it.”

Issa also suggested—again, without evidence—that tea partiers’ complaints about the agency’s heavy-handed treatment were overlooked because it was an election year. “My gut tells me that too many people knew that this wrongdoing was going on before the election, and at least by some sort of convenient benign neglect allowed it to go on through the election, allowed these groups, these conservative groups, these, if you will, not friends of the president to be disenfranchised through an election,” he said. “Now, I’m not making any allegations as to motive, that they set out to do it. But certainly, people knew it was happening.”

There’s been quite a bit of fallout since the IRS scandal erupted two weeks ago, when Lerner, who runs the IRS division that oversees politically active nonprofits, apologized for the singling out of conservative groups. Lerner is now on paid leave. Steven Miller, the acting commissioner of the IRS when the scandal broke, resigned his position; he was replaced by Danny Werfel, an Obama administration official. Members of the House and Senate have held numerous hearings on the issue, blasting Lerner, Miller, and the Treasury inspector general whose report found numerous examples of wrongdoing but no evidence of political bias. The release of an internal video showing IRS staffers learning a dance called the “Cupid Shuffle” at a 2010 conference has only added to the agency’s woes.

Werfel, the current acting commissioner, will address the video and the IRS’ targeting scandal at Congressional hearings this week.