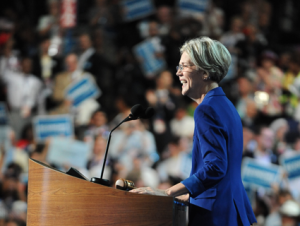 Over the past decade, student loan debt has nearly quadrupled, and now stands close to $1 trillion. On July 1, rates for federal need-based student loans are set to double from 3.4 percent to 6.8 percent. The deadline has lawmakers scrambling for a fix. There are a bunch of proposals out there, including Warren’s call for students to be allowed to pay the low, low rate that big banks pay the Federal Reserve for their short-term borrowing; a plan President Barack Obama laid out in his budget in April; and the GOP plan that recently passed the House, which Warren and Obama hate.

The GOP bill would allow interest rates on student loans to rise or fall from year to year with the government’s cost of borrowing, ending the current system under which rates are fixed by law. Because market rates are low right now, the initial rate for the loans envisioned by the Republican bill  would be about 4.4 percent, but the legislation would allow them to rise to as much as 8.5 percent. Warren says the plan would turn students into “a profit center”: “Already the government is scheduled to make $51 billion in profits in loans it makes next year. That’s 36 cents in profit for every dollar they lend out. And the House bill would make even more money off students,” Warren said at the briefing.

She touted her own plan, the Bank on Students Loan Fairness Act, which would act as a one-year patch, cutting student loan rates to the same rock-bottom interest rate that banks pay to the Federal Reserve for short-term loans. “If a big bank wants to take out a loan from the Fed, it can get .75 interest rate. These are the same banks that cost millions of Americans their jobs and nearly broke the economy. But next year, a student would have to pay nine times as much on her debt,” Warren said, referring to the scheduled jump in interest rates to 6.8 percent. “It isn’t right. It isn’t fair. And it isn’t good economic policy.”

The ultimate solution, Warren said, is not her one-year fix. It’s Americans demanding a fair student loan system. “You can’t do this by having a few people stand up in the US Senate and the House and say ‘this is important,'” she said. “This is test of whether we can organize something at the grass roots and move it forward. It will take us… and a whole lot more people to show [Congress]… that it does matter and they have got to respond.”