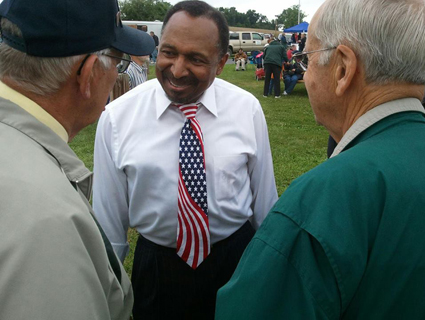 Rev. E.W. Jackson, the Republican nominee to be the next lieutenant governor of Virginia, has a well-documented history of saying pretty crazy things. He thinks gays are “ikky.” He compared a non-discrimination bill to “a pedophiles’ rights bill.” He accused President Obama of using NASA to “expand Islam.” He believes yoga is a gateway to Satan. And in his 2008 book, Ten Commandments to an Extraordinary Life, Jackson warned that “satanic rock,” rap music, and modern-day “witchcraft” were leading to a societal breakdown. Here are some of the highlights from that book.

Rap and “satanic rock” are “eggs of destruction”:

This is why we need not waste time arguing with the media about whether a steady diet of gangster rap, satanic rock music, profane, violent and pornographic films have an impact on people’s behavior. This is not a statistical question; it is a spiritual one. There may never be a satisfactory statistical answer because the period of incubation before manifestation makes it difficult to establish the causal connection with scientific certainty. It is not that some teen will listen to violent rap music tonight and go out to commit mass murder tomorrow. Nonetheless, if that youngster continues to “meditate” those violent, hate filled images and ideas, he or she will manifest those ideas into their lives in one way or another…. This is not an argument for governmental censorship, but for individual censorship over what you and your family listen to and watch. Allow yourself to incubate the eggs of destruction and sooner or later they will hatch, exploding in your face.

Don’t hang out with witches:

There are those who engage in witchcraft, fortune telling, Tarot Card, tea leaf and palm reading and other “spiritual” practices. These practices are wrong and dangerous. They are spoken of as an “abomination”—a particularly detestable sin—in the sight of God. They bring a terrible curse on the person who engages in such things, and you do so at your own peril.

The nature of spiritual death is distaste for true spiritual life. Have you noticed the respect and awe people have for eastern philosophies and religions which reject the God of the Bible? When a Buddhist sets himself on fire in some misguided protest, the media does not see it as fanaticism. But the same media readily caricature the entire Christian community based on the excesses of a few. Non-Christian religions have their own values which are often highly questionable. Yet there is a remarkable deference paid to any religious system that does not include Christ as the Son of God. Affinity for anything but what is truly of God is the nature of spiritual death?

Jackson, though, was at least upfront about his fears that most readers wouldn’t take his words seriously. “I hazard to guess what percentage of those who read this book will actually follow through to put its principles to work,” he wrote. “How many will obey these ‘Ten Commandments’? Ten percent may have the discipline, commitment and interest to follow through.”