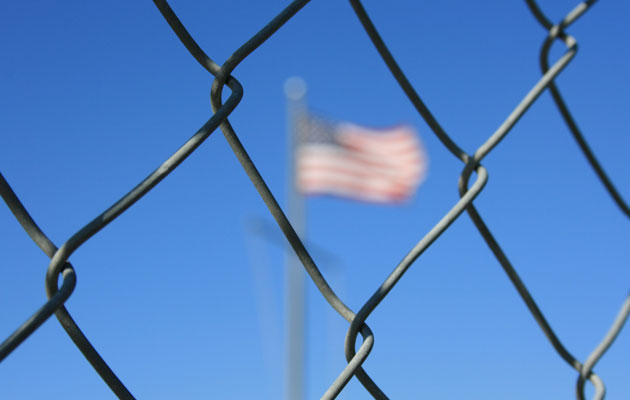 On Monday, the Senate voted 67-27 to clear a path for the bipartisan passage of comprehensive immigration reform by ending debate on the border security compromise reached by Sens. Bob Corker (R-Tenn.) and John Hoeven (R-N.D.). But many senators voted for their so-called “border surge” amendment with major reservations about its costs, projected to add $40 billion to a bill already expected to cost $6.5 billion. Sen. Patrick Leahy (D-Vt.) called it a “Christmas list for Halliburton.” Sen. Lindsey Graham (R-S.C.) told Fox News that it “practically militarize[s] the border.” Corker himself called his amendment “almost overkill.”

The bill would grant some undocumented immigrants provisional legal status, and then, after a 10-year waiting period, allow them to apply for permanent legal status. But under the amendment, the clock won’t stop ticking until the government meets several “triggers,” or benchmarks: deploying 20,000 new border patrol agents, erecting 700 miles of fencing between Mexico and the United states, mandating nationwide use of the now-voluntary electronic employee verification system E-Verify, and achieving the “full implementation and activation” of $4.5 billion worth of surveillance technology—including drones.

If the House plays along and passes a similar bill, that’s all good news for the companies poised to receive generous border contracts from the Department of Homeland Security. Those companies, many of which have lobbied hard for an immigration reform bill with ramped-up security and surveillance measures, would get new funds for projects related to:

Border Patrol agents: On top of all the new salaries, 20,000 more agents means a lot of new equipment, like firearms. Since 2012, German firearms company Heckler & Koch has received about $500,000 and US-based Remington Arms $160,000 in DHS immigration enforcement contracts for guns and ammo. It also means more training. The security corporation Chenega, which received $103 million from DHS’s Customs and Border Protection (CBP) in 2012, has taught Border Patrol agents how to operate surveillance systems.

Fences: In 2009, Congress’s Government Accountability Office estimated it would cost between $400,000 and $15 million to build just one mile of border fence. That same year, CBP finished building a $2.4 billion, 670-mile border fence that been under construction since 2006. That was a single-layer fence; the Senate bill calls for 700 miles of double-layered fencing. One of the biggest contractors on that fence was the aerospace and defense corporation Boeing, which received more than $1 billion from CBP between 2006 and 2009, and more than $35 million in 2012, for border security projects.

Databases: Collecting personally identifying information, or biometrics, like fingerprints and photographs, is a big part of the Senate bill’s requirements that all businesses use E-Verify and that all air- and seaports have biometric tracking for anyone entering or leaving the country. Since 2004, the multinational tech and consulting company Accenture has been one of the Border Patrol’s leading biometrics contractors, receiving $1.9 billion from DHS; it has lobbied Congress on biometric tracking, which it would like to see expanded to all land ports as well. Unisys, which received $132 million from CBP in 2012 for IT work, also creates biometrics systems. Changing E-Verify from a voluntary to a mandatory system would likely mean millions more in federal contracts for IT companies.

Virtual fences: The Senate bill would give CBP at least $4.5 billion for surveillance technology in an effort to ensure a 100 percent watch over the southern border. In 2006, the government launched the Secure Border Initiative, an $850 million “virtual fence” surveillance project led by Boeing that was rife with oversight problems and later declared a failure by DHS. Military contractors, facing diminishing profits in Iraq and Afghanistan, will soon vie for a contract worth up to $1 billion for towers, radars, and camera systems—a reworking of the earlier program. One likely candidate is Lockheed Martin, which received $106 million in CBP contracts in 2012.

Drones: Another chunk of the $4.5 billion for surveillance will go toward unmanned aerial vehicles, or drones, which cost about $18 million to buy and another $3,000 or so each hour of flight (PDF). Northrop Grumman, which received $90 million in various DHS contracts in 2012, is trying to sell the department on a drone-mounted tracking device that’s been used to detect bombs in Afghanistan; General Atomics, which received nearly $30 million from CBP in 2012, recently got a contract worth upward of $400 million that it plans to use to double the number of its border drones.

Detention facilities: Even though there are fewer people illegally crossing the southern border then at any point in the last 40 years, the Senate bill sets a goal to catch 90 percent of them. And once they’re caught, they’ll have to go somewhere. GEO Group, one of the largest private prison corporations, has been lobbying Congress in favor of immigration reform, despite public statements to the contrary. Last year alone, GEO Group received $142 million in contracts from DHS’s Immigration and Customs Enforcement agency. G4S, an international security company that got $63 million from CBP in 2012, guarantees the “safest, most secure and humane transport of prisoners, offenders, and illegal aliens.”

In 2013, nearly 400 organizations have already lobbied Congress on immigration reform. Many of them are companies that stand to gain from the bill. Senate reformers agreed to vote for it, and for a more militarized border, in exchange for a pathway to citizenship for 11 million undocumented immigrations—and, almost certainly, a lot more wasteful spending.

It looks like immigrants won’t be the only ones helped by immigration reform.