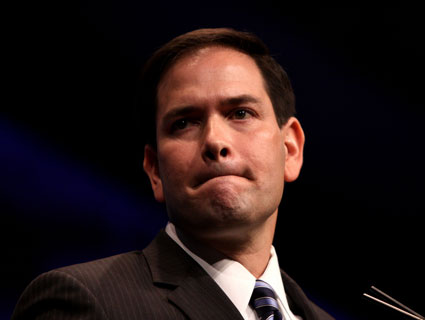 On Thursday, Sen. Marco Rubio (R-Fla.), a member of the bipartisan Gang of Eight who crafted the Senate immigration reform bill, warned that he would withdraw his support for the legislation if a gay rights amendment authored by Sen. Patrick Leahy (D-Vt.) is added to the bill. The measure, which Leahy filed on Tuesday, would allow a citizen to petition the government for permanent residency for his or her same-sex partner. “If this bill has in it something that gives gay couples immigration rights and so forth, it kills the bill. I’m done,” Rubio said on the Andrea Tantaros Show.

Leahy spokesman David Carle said on Friday that Leahy has no plans yet to respond to Rubio’s comment—the day before, Leahy declined to comment, saying that he hadn’t seen Rubio’s statement. The Senate leadership hasn’t decided which amendments will ultimately get a vote, but even if Leahy’s does, it’s highly unlikely to pass. Still, the fact that it is even floating out there has concerned senators who don’t want to destabilize the fragile talks.

“Everyone’s got the Blumenthal mindset right now—keeping their amendments on the table, but don’t want to doom it all,” says a Democratic aide familiar with the talks. He was referring to Sen. Richard Blumenthal (D-Conn.), who is still considering whether to press for a vote on two controversial gun control amendments he’s proposed for the immigration bill. “I’m not going to doom or cripple immigration reform efforts to raise those amendments,” Blumenthal told Mother Jones on Thursday.

Meanwhile, the bigger threat to immigration reform in the Senate right now involves border control. Sen. John Cornyn (R-Texas) introduced a “poison pill” amendment opposed by Democrats that would massively expand border security and could sink the bill if enough Republicans sign on. Republicans in the Gang of Eight hope to iron out a compromise with Cornyn, although Democrats are skeptical that he can be persuaded.