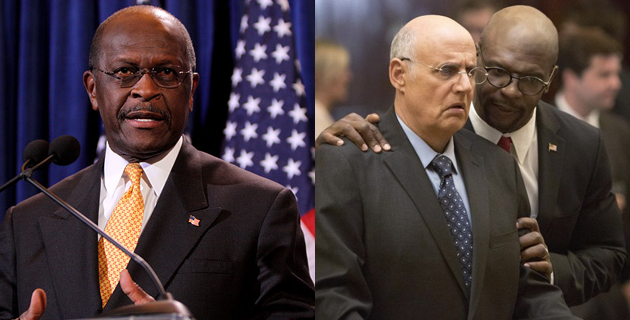 The new season of Arrested Development has a sharp political edge that should feel familiar to fans of the show. The series’ original three-season run on Fox, which aired between 2003 and 2006, contained some of the richest TV satire of the Iraq War and Bush years (bad WMD intel, “Mission Accomplished,” “preemptive strike,” Abu Ghraib, CIA dysfunction, war protests, and so on). The fourth season, which debuted on Netflix in late May, depicts the infamous Bluth family in the context of a new political era, one defined by the American housing crisis, economic collapse, and out-of-control drone warfare. But of all the political elements of this long-awaited season, arguably the most important—or at least most visible—real-world inspiration for this new batch of episodes is Herman Cain, the one-time 2012 GOP presidential front-runner and former pizza baron.

Cain is well aware of this satirical, comic rendering of his 2012 “Cain Train“—he just couldn’t care less about it. “I heard about it, haven’t seen it, and I’m unfazed by it,” Cain said in a statement sent to Mother Jones. “In the vernacular of my grandfather, ‘I does not care.'”

During a conference call on Wednesday, Arrested Development creator and executive producer Mitchell Hurwitz revealed exactly why he and his creative team focused so much on lampooning Cain in the show’s fourth season. Hurwitz had already planned on mining the Republican presidential field for satire and topicality. One idea was to cast some famous and extremely good-looking actors—including George Clooney—to play a family of “Mexican Romneys” in the new season. That idea was ultimately left unfulfilled, which gave Hurwitz time to turn his attention to Cain.

“[When we were writing this,] the Republican Party was a little desperate…so trounced, as has been well-documented, by the Democrats,” Hurwitz told me. That desperation manifested itself in what Hurwitz saw as some interesting cable-TV spin. “Any black man on any news show [during that election] was a Republican!…If you were to look at the spin created by the party at that time, it would look like it’s a 90 percent African American party.” And Cain’s unique, brazen persona (not to mention his turbulent underdog campaign) was too much for Hurwitz not to acknowledge. “He was such a charismatic…[and kind of] adorable guy. So funny, so interesting, it just felt like a rich area for comedy. And it also felt just politically incorrect enough.”

“Here’s a good way to make fun of a guy who happens to be black. Let’s make him a Republican!”

Hurwitz also expressed his view that it is often “very difficult” to deal with minority or female characters in TV comedy, due to the all-to-common constraints and demands of political correctness and oversensitivity. “Whether it’s gays…or African Americans…[TV writers] tend to say this character has got to be kind of flawless,” Hurwitz says. Another example Hurwitz points to is moms—in many sitcoms, the “mom is the only one who has their shit together,” he says.

With the Herbert Love character—and with Cain as prime inspiration—Hurwitz and company had found their way out of that bind. “[We said to ourselves], ‘Here’s a good way to make fun of a guy who happens to be black. Let’s make him a Republican!'”

To get a better idea of the Cain-influenced character, you can binge-watch the whole season on Netflix now. Or you can check out this interview with Terry Crews, who plays the part of Love:

Mark Block did not respond to requests for comment.