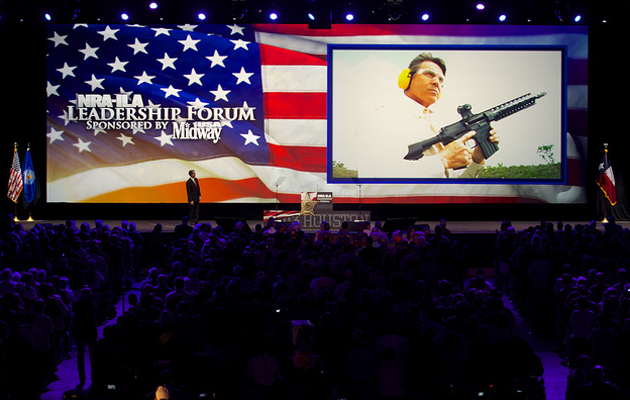 Texas Gov. Rick Perry isn’t happy about Democratic state Sen. Wendy Davis’ 11-hour (11th hour) filibuster of a strict anti-abortion bill that would ban pregnancies after 20 weeks and close all but five abortion providers in the nation’s second-largest state. On Wednesday, he announced plans to convene a special session of the Legislature next month so Republicans can reintroduce the legislation. On Thursday, he took a more personal shot at Davis. Referring to the fact that Davis was herself a teen mom (she had her first child at 19, before going on to Texas Christian University and Harvard Law), Perry mused: “It is just unfortunate that she hasn’t learned from her own example that every life must be given a chance to realize its full potential and that every life matters.”

This isn’t the first time Perry has wandered into uncomfortable territory when talking about teen pregnancy, though. He sort of has a knack for it.

In February, he blamed rising teen pregnancy rates on the fact that America had strayed from the core values exemplified by the Boy Scouts—something he feared would be exacerbated if the organization drifted from its morals and embraced openly gay members. The Boy Scouts advocate abstinence before marriage. Then again, so does the state of Texas—and all it has to show for it is the third-highest teen pregnancy rate in the nation.

Speaking of that, in a 2010 interview that went viral during his presidential campaign, Perry was asked by Texas Tribune editor Evan Smith to explain the disconnect between Texas’ high teen pregnancy rate and its policy of abstinence-only sex education. “Abstinence works,” Perry said, to laughter from the audience. He continued:

It works. Maybe it’s the way that it’s being taught or the way that it’s being applied out there, but the fact of the matter is it is the best form to teach our children. I’m just gonna tell you from my own personal life abstinence works. And the point is if we’re not teaching it and if we’re not impressing it upon them, no, but if the point is we’re gonna go stand up here and say, “Listen, y’all go have sex and go have whatever is going on and we’ll worry with that and here’s the ways to have safe sex,” I’m sorry, call me old-fashioned if you want, but that is not what I’m gonna stand up in front of the people of Texas and say that’s the way we need to go and forget about abstinence.

It is just unfortunate that the governor of Texas hasn’t learned from his own example that nothing good ever happens when he talks about teen pregnancy.