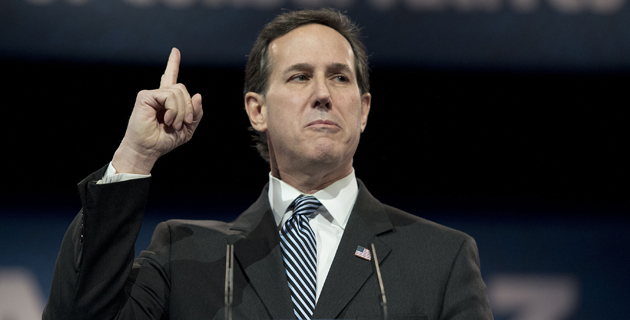 Is Rick Santorum the next Jeffrey Katzenberg?

Well, no, probably not. But like the DreamWorks mogul, Santorum will soon be the CEO of a movie studio. Over the weekend, failed Republican presidential candidate/former senator/gross-out internet obsession Santorum announced that he had been named CEO of EchoLight Studios, a Dallas-based, “family-friendly” film company catering to Christian audiences. “This is the right place and right time, and I’ve jumped in with both feet,” Santorum said on Monday. “Dallas can become the Hollywood of the faith-and-family movie market…We’re in a position with potential to transform the industry.” (Santorum and a representative for EchoLight Studios did not respond to Mother Jones‘ requests for comment regarding his new gig.)

Santorum has urged America’s religious right to try to inject their message into mainstream pop culture before. In a speech at the Heritage Foundation in 2011, he instructed Christian conservatives to up their game. “The problem in the past is that you have these people who create these Christian films—great message, terrible acting, horrible editing. They are not entertaining, they’re preachy…[If you] entertain them and leave them a good message…people will show up.”

By now, it’s well established that Santorum’s idea of a good message may include horrifically demonizing gay people, attempting to torpedo reproductive rights, and ripping off American veterans. But what does the man know about movies? Here’s what:

1. He’s used horror movie imagery to attack Obama. During the 2012 campaign, Team Santorum released its “Obamaville” ad, envisioning a future in which President Barack Obama is reelected to a second term and America loses its quality health care and freedom of religion—or something. The ad apes the imagery, style, and tone of classic horror films. “Those kind of shots are common to post-apocalyptic zombie movies,” Prof. Spencer Parsons, who teaches film production at Northwestern University told Reuters. “You kind of half expect a zombie to shamble around the corner.” Alfred Hitchcock and The Twilight Zone also come to mind. Check out the spot:

2. His favorite movie is… Field of Dreams, the critically acclaimed 1989 drama about baseball, family, ghosts, and sentimentality, starring Kevin Costner and James Earl Jones. The film was set and shot in Iowa, a state that hosts the caucus Santorum won in 2012. He is also a huge fan of fantasy baseball, which he has been playing for nearly two decades. (For comparison, Mitt Romney picked O Brother, Where Art Thou? as his favorite film of all time, while presidential hopeful Ron Paul went with “I don’t watch many movies.”)

3. Santorum’s abandoned film project…about Iranians. In 2007 (not long after he lost his Senate seat), Santorum was reportedly in talks with The Passion of the Christ and Braveheart producer Stephen McEveety to work on a movie about three Iranian brothers, one of whom turns to a life of Islamic terrorism. Sadly, the project never got off the ground. On a related note, here’s Santorum flirting with a terrifyingly fringe, nuclear-Iran, end-times theory.

4. He is familiar (hopefully) with Monty Python. In March 2012, Romney aides compared Santorum’s primary-campaign persistence in the face of inevitable defeat to that of the Black Knight in Monty Python and the Holy Grail. If Santorum didn’t get the reference, hopefully he was curious enough to Google up the clip below.

5. He’s worked with an Oscar-winning film director. Santorum played himself in Steven Soderbergh‘s short-lived, partially improvised political series K Street, which aired on HBO in 2003. In the episode “Week 1,” Santorum is shown walking through Washington, DC, talking shit about Democratic strategist James Carville (who also plays himself). Then-senator Santorum is briefly seen and heard in this promotional clip for the show: