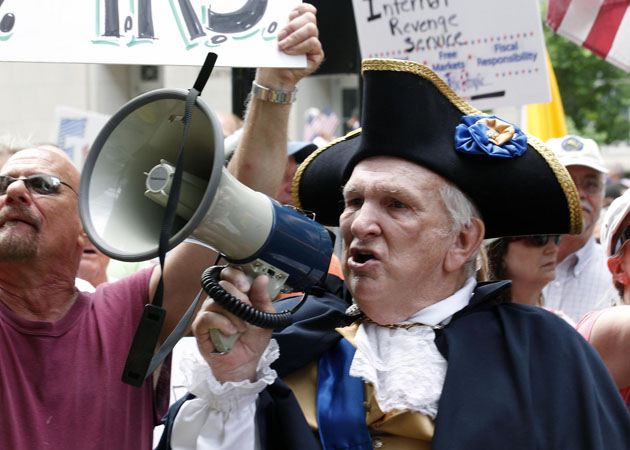 A Member of the Tea Party in front of the John Weld Peck Federal Building during a nationwide protest at IRS offices.<a href="http://zumapress.com/zpdtl.html?IMG=20130521_zaf_c199_005.jpg&CNT=0">Ernest Coleman</a>/ZumaPress

The improper targeting of tea party groups and other conservative nonprofits by the Internal Revenue Service has inspired a wave of lawsuits against the agency. The suits have provided an opportunity for grandstanding—”Americans are not going to be bullied and intimidated by our government,” declared the American Center for Law and Justice’s Jay Sekulow, who is representing 25 conservative groups suing the IRS—but legal experts say those cases may yield little more than publicity.

There are at least three pending lawsuits against the IRS and its employees, with most of the plaintiffs alleging the agency violated their free speech and equal protection rights by singling them out for additional scrutiny. All of the plaintiffs seek monetary damages from the IRS or key employees. Some are also seeking the nonprofit status they’ve still not received, along with a permanent injunction against the agency barring it from meddling in their affairs again. But outraged tea partiers are in for an uphill battle.

For all the speechifying about free speech, First Amendment rights don’t apply to the issue at the heart of those suits: tax-exempt status. Such arguments “are unlikely to persuade courts because tax exemption has not been thought to be a First Amendment issue, because the organizations have the right to speak even if they’re taxable,” explains Frances Hill, a professor at the University of Miami School of Law. “The idea that their status may be delayed or denied doesn’t mean that their First Amendment rights have been denied or imperiled.”

Beyond the First Amendment issues, legal experts who have reviewed the lawsuits think they have a limited chance of success, largely because the courts have very narrow authority to do what lawyers like Sekulow are asking them to do—that is, to award damages for alleged constitutional violations or order the IRS to recognize their nonprofit status.

Matthew Journy and Jeff Tenenbaum, tax lawyers at the DC firm Venable, analyzed Sekulow’s complaint and concluded that the court is likely to dismiss 23 of the 25 plaintiffs straight away. Here’s why: In one part of his case, Sekulow is suing under a section of the Internal Revenue code that allows a nonprofit to ask a judge to order the Treasury Department to recognize its nonprofit status if the IRS has either refused to do so or improperly delayed a determination. But that part of the code applies only to nonprofits seeking 501(c)(3) status, a tax-exempt designation that has tight restrictions on political activity and that allows donors to deduct their contributions from their taxes. Only 2 of the 25 plaintiffs in the case sought such a designation. The rest applied for 501(c)(4) status, which allows limited political activity but not tax-deductible contributions. These nonprofit entities are not covered by the statute Sekulow is suing under. Even if they were, 13 of the plaintiffs have already won the only real remedy available under that particular provision: tax-exempt status. (Sekulow didn’t return a call for comment.)

The remaining two plaintiffs who might be allowed to proceed with legal action will still face major hurdles, particularly because their complaint, as it’s currently written, isn’t specific enough to meet the high bar the court requires, according to Journy and Tenenbaum.

All of the pending suits are asking a court to award punitive damages—even though the law of sovereign immunity expressly prevents the award of such damages against the government in most cases. In tax-exempt cases, punitive damages are only available under very limited circumstances that may not apply to many of the tea party plaintiffs.

One of the highly publicized cases is a class action spearheaded by Mark Meckler, a cofounder of the national umbrella group Tea Party Patriots. Meckler largely disappeared from the tea party scene in early 2012, not long after getting arrested at New York City’s LaGuardia Airport for trying to bring a gun through security. He recently resurfaced with a new group called Citizens for Self-Governance, which has been trying to sign up class members for a suit against the IRS. The aggregated claims of many plaintiffs could potentially add up to a significant award in a class action.

The named plaintiff in the suit is Meckler’s hometown tea party group, the NorCal Tea Party Patriots. Their suit attempts to circumvent the many impediments to winning big damages from the IRS by targeting Lois Lerner, the embattled director of the exempt organization division, and other IRS employees, in the hopes of holding them individually liable for constitutional violations. (Meckler did not return a call for comment.)

But the bar is high for winning a lawsuit against a government employee. To do so, the plaintiffs must prove not only that the IRS employees violated their constitutional rights, but also that “a reasonable person would have known that the employees’ actions violated a clearly established constitutional right,” explains Lloyd Mayer, a law professor and associate dean at the University of Notre Dame law school.

Before Meckler’s legal team could make that argument, though, it would first have to succeed in getting a judge to certify the case as a class action, meaning they could pursue claims on behalf of every tea party group targeted, regardless of whether those groups signed on as plaintiffs. That’s become increasingly difficult to do. Legislation passed in 2005 creates strict rules about how class action cases can be brought, and the Supreme Court has been very hostile to class actions under Chief Justice John Roberts.

Sekulow and a group called True the Vote, which filed a separate lawsuit, are attempting to find a source for damages by arguing that the IRS is guilty of violating a law barring the agency from disclosing private tax return information. The law allows taxpayers to win up to $1,000 per disclosure, plus attorneys fees. Historically, it has been invoked when IRS employees have taken unauthorized peeks at the tax returns of the rich and famous. But the tea partiers are arguing that the IRS violated this law by subjecting them to additional scrutiny and forcing them to divulge more private information than they needed to. Hill, for one, doesn’t think this argument will fly. “It’s not the same as employees who were sorting through Hollywood stars filings during their lunch hours just for fun,” she says.

Mayer agrees: “What is odd about these claims is that normally this type of action is based on a claim that the IRS disclosed to other parties the protected information. Here, instead, the plaintiffs are asserting that the IRS forced them to disclose such information to the IRS unnecessarily through overbroad inquiries. It is not clear that such an overbroad inquiry by the IRS can be the basis for this type of damages action.”

Despite all of these obstacles, Hill thinks that at least one or two of the pending lawsuits could make it to the discovery phase of litigation, which she suspects may be one of the motivating factors for filing them. Discovery will compel the production of internal IRS documents and perhaps the depositions of Lerner and other IRS employees—in other words, plenty of opportunity for dirt-digging that could embarrass the government.

But discovery works both ways. It would also give the IRS the opportunity to show that it was justified in holding up the applications of certain tea party groups. Such discovery might not be especially flattering to at least one of the groups that’s currently suing the IRS. In a separate case decided last year, a Texas judge ruled that True the Vote, a 501(c)(3) established to police the polls during the 2010 elections supposedly to root out alleged voter fraud, was operating like a political action committee and improperly aiding the GOP. The group has also come under fire for donating $5,000 to the Republican State Leadership Committee during the 2012 election. Nonprofits are barred from making political donations. But Cleta Mitchell, the attorney for True the Vote, says, “I’ve reviewed all these allegations and the facts in each…and I’m not worried about them. We have a strong case.”

True the Vote is asking a judge to award financial damages because of the agency’s requests for additional information in connection with its nonprofit application. But its lawsuit, if successful, almost guarantees that even more information about the group will be disclosed—and not just to IRS officials, but to the broader public. Hill observes that at the moment, “I think the IRS at this point is far less interested in conducting discovery of these groups than the groups are in conducting discovery of the IRS.”

If the IRS does want to head off all that tea party scrutiny, it has an easy out in the case of True the Vote and two of Sekulow’s 501(c)(3) clients. It can just recognize their nonprofit status. The cases will likely go away. The complaints, no doubt, won’t.