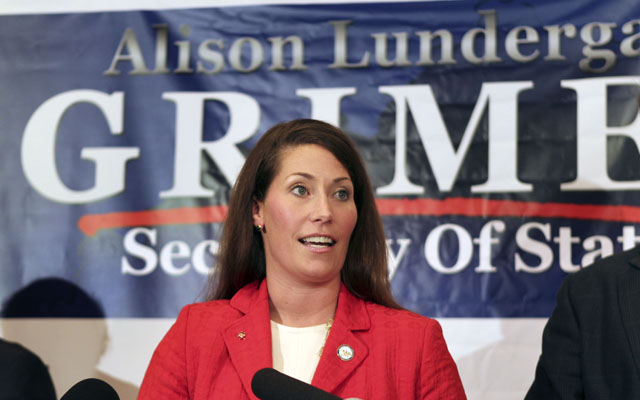 Secretary of State Alison Lundergan Grimes announces she will seek the Democratic nomination to challenge Sen. Mitch McConnell in 2014, during an afternoon news conference in Frankfort, Kentucky, July 1, 2013.Lexington Herald-Leader/ZUMAPRESS.com

Alison Lundergan Grimes, the Kentucky Democrat who is challenging Senate Minority Leader Mitch McConnell in next year’s election, is wasting no time beating the bushes for campaign cash. On Saturday, she “wowed” attendees at a Democratic Party private fundraising retreat on Martha’s Vineyard. She’ll need to wow a lot more donors, and fast: McConnell is a master fundraiser, and Grimes will need a whole lot of cash to defeat one of the most powerful Republicans in Congress.

But how much? Between $26 million and $30 million, according to a Democratic strategist who recently spoke with Grimes. Even with Election Day still 17 months away, Grimes has been busy courting DC politicos to raise funds, name-dropping the Clintons in her conversations. Grimes’ father, Jerry, a former director of the Kentucky Democratic Party, is friends with Bill Clinton, who reportedly urged Grimes to run against McConnell. (Grimes spokesman Jonathan Hurst did not immediately respond to a request for comment.)

Even by the standards of today’s big-money politics, Grimes’ $26-30 million target is a staggering sum of money. It’s almost three times more than the average winning Senate race in 2012. Only four Senate candidates—Scott Brown and Elizabeth Warren of Massachusetts, David Dewhurst of Texas, and Linda McMahon of Connecticut—raised more than $26 million during the 2012 election season. And Grimes’ fundraising goal does not include outside groups—super-PACs, dark-money nonprofits, etc. Depending on how competitive the Kentucky race is, tens of millions more in outside money could pour in.

Grimes’ impressive showing at the Martha’s Vineyard event could help donors and party loyalists forget her campaign’s rocky start. Her kick-off event started half an hour late, with no banner or signs even mentioning the US Senate. Instead, an “Alison Lundergan Grimes: Secretary of State” banner hung behind her. A roll of toilet paper propped up one of the microphones she used make her announcement. At the time of her campaign launch, she had no website, no Facebook page, and nowhere for people to donate money.

McConnell, meanwhile, has been in campaign mode since literally the day after the 2012 elections, when he held his first 2014 fundraiser. In the second quarter of 2013, McConnell raised $2.2 million, more than any other Republican running for reelection. His campaign currently has $9.6 million in the bank.