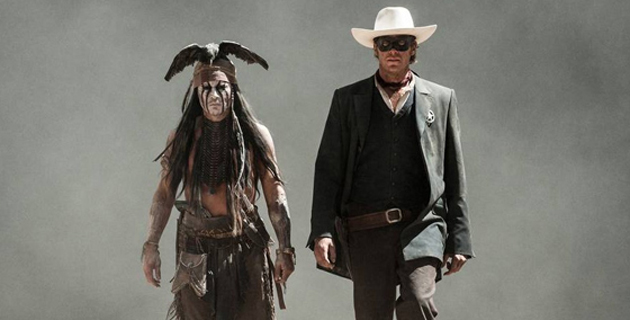 “[The] Native American community…is so behind this movie, it’s fantastic,” producer Jerry Bruckheimer said in a recent interview with Sean Hannity on Fox News.

Bruckheimer was there promoting The Lone Ranger (Walt Disney Pictures, 149 minutes), a film released on Wednesday that he made with Gore Verbinski, a director who previously worked with Bruckheimer on the Pirates of the Caribbean films. The Lone Ranger, starring Armie Hammer as the title character and Johnny Depp as his Comanche partner Tonto, is a $250 million big-screen adaptation of the famous American western franchise of the same name. (Click here to listen to the classic Lone Ranger theme song, which you’ve probably had committed to memory since you were a kid.) The new film, and past incarnations, show the Lone Ranger and Tonto combating injustice in the Wild West. The movie has an exciting, perfectly worthwhile start and finale (each showcasing a prolonged action sequence with fast trains), but it’s ultimately dragged down by a two-hour stretch of soporific, mismanaged middle. So the film was critically panned, but it has received some surprisingly positive press coverage for something many assumed would be its primary hurdle.

Long before The Lone Ranger hit theaters, there was plenty of debate over how stereotype-enforcing or offensive the depiction of Tonto was going to be. (Understandable, given that American entertainment and pop culture have a miserable-at-best track record of depicting indigenous peoples of North America.) “Ecstatic American Indians Praise ‘The Lone Ranger,'” an Onion headline from June sarcastically notes. But to the script‘s credit, Tonto is depicted as respectfully as you’re likely to get from a Hollywood summer blockbuster. That may not be a particularly tall order, but the film does do an adequate job of portraying the spirit-warrior character as an actual hero (instead of merely a silly sketch of an ethnic sidekick), and pays special attention to injustice toward and mass-murder of Native American populations.

Still, there have been a few harsh accusations of racism following early screenings of the movie. But those critique have largely been drowned out, in part thanks to Disney’s aggressive campaign of outreach and ass-covering—in other words, its carefully calculated efforts to insulate themselves from charges of racial insensitivity.

“[Johnny’s] part Native American,” Bruckheimer stressed on Hannity, a disputed claim that was repeated over and over during the run-up to The Lone Ranger‘s premiere to counter those complaining about the race of the actor playing the Comanche warrior. (In May 2012, he was made an honorary member of the Comanche Nation.)

There were many other ways Depp, Bruckheimer, Disney, & Co. demonstrated at least a superficial consideration for American Indian culture. The production hired cultural advisers from the Comanche Nation to come on set. Native American actors are featured in the film, part of which was shot on Navajo Nation land. Prominent Native leaders were invited for photo ops with Depp. A special premiere was held in the capital of the Comanche Nation, with leaders of Comanche Nation, Navajo Nation, the National Congress of American Indians, and Americans for Indian Opportunity in attendance. (These individuals did not respond to Mother Jones‘ requests for comment.) Proceeds from a motorcycle auction and a $1,000-per-ticket gala event at Disneyland went toward the American Indian College Fund.

“It’s like, the white people are the one[s] who have the problem,” Hammer said in an interview in April. “But the Indians…are like, ‘This is great. We love it.'” (This is of course not entirely true; Michelle Shining Elk, a member of the Colville tribe who also works in the movie business, blasted the film for in her view reinforcing the perception that “we are uneducated, irrelevant non-contributors to society living in teepees out on the Plains.”)

However much Bruckheimer, Depp, and everyone else involved actually give a damn about the feelings of Native Americans is anyone’s guess. But at the very least, their efforts are a crash course in how to methodically counter bad buzz. It’s just that this heap of good PR doesn’t seem to be helping the film’s ticket sales at all.

A publicist for The Lone Ranger and Disney could not be reached for comment. Here’s a trailer for the film:

The Lone Ranger gets a wide release on Wednesday, July 3. The film is rated PG-13 for sequences of intense action and violence, and some suggestive material. Click here for local showtimes and tickets.