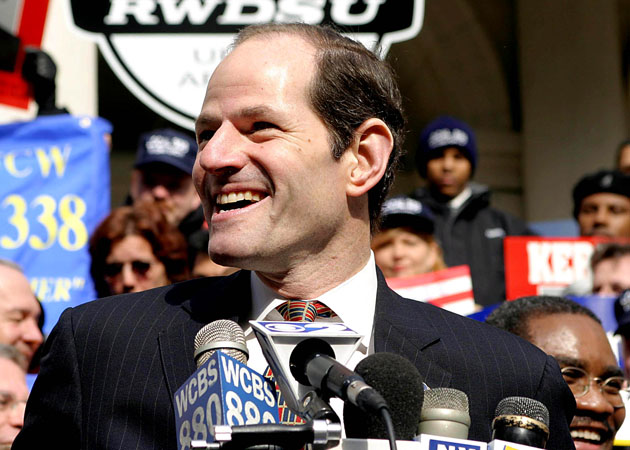 A giggle or two about Eliot Spitzer’s attempted comeback would be quite natural. With the news that he’ll be running for comptroller of New York City, the former New York governor, who resigned after he was caught in an S&Mish prostitution scandal, invites the unavoidable comparison to Anthony Weiner, another former disgraced Dem currently seeking redemption by campaigning for NYC mayor. But when Spitzer reentered public life in 2008 as a Slate columnist, I noted that his return to the national discourse was worth a cheer or two—mainly because he had been and could once again be a well-informed voice regarding the excesses of Wall Street and Big Finance. Does that mean that he should be embraced by populist-minded voters and pundits, as he embarks on his make-over campaign? Judging politicians on morality is often a personal exercise, and reasonable people (prudes and non-prudes) can reach different but equally legitimate conclusions about the connection between a candidate’s personal life and his or her public standing. In other words, that’s up to you.

In any event, with Spitzer now water-cooler fodder, here’s the post I wrote when he first stepped out of the shadows:

It’s easy to snicker at Slate magazine for signing up Eliot Spitzer, former New York governor and onetime john, as a regular columnist. But judging from Spitzer’s first outing, it was a master stroke.

The manner in which Spitzer crashed and burned has essentially wiped out the pre-prostitution portion of the Spitzer tale, which included his longtime stint as a critic of corporate excesses. But Spitzer’s opening column in Slate is a reminder that in these days of multi-billion-dollar bailouts, there are few powerful and knowledgeable figures in government raising the appropriate questions and challenging the save-the-rich orthodoxy.

From his Slate piece:

What are we getting for the trillions of dollars in rescue funds? If we are merely extending a fatally flawed status quo, we should invest those dollars elsewhere. Nobody disputes that radical action was needed to forestall total collapse. But we are creating the significant systemic risk not just of rewarding imprudent behavior by private actors but of preventing, through bailouts and subsidies, the process of creative destruction that capitalism depends on.

A more sensible approach would focus not just on rescuing preexisting financial institutions but, instead, on creating a structure for more contained and competitive ones. For years, we have accepted a theory of financial concentration—not only across all lines of previously differentiated sectors (insurance, commercial banking, investment banking, retail brokerage, etc.) but in terms of sheer size. The theory was that capital depth would permit the various entities, dubbed financial supermarkets, to compete and provide full service to customers while cross-marketing various products. That model has failed. The failure shows in gargantuan losses, bloated overhead, enormous inefficiencies, dramatic and outsized risk taken to generate returns large enough to justify the scale of the organizations, ethical abuses in cross-marketing in violation of fiduciary obligations, and now the need for major taxpayer-financed capital support for virtually every major financial institution.

But even more important, from a structural perspective, our dependence on entities of this size ensured that we would fall prey to a “too big to fail” argument in favor of bailouts.

Spitzer has summed up the problem as well as anyone. He goes on:

Two responses are possible: One is to accept the need for gigantic financial institutions and the impossibility of failure—and hence the reality of explicit government guarantees, such as Fannie and Freddie now have—but then to regulate the entities so heavily that they essentially become extensions of the government. To do so could risk the nimbleness we want from economic actors.

The better policy is to return to an era of vibrant competition among multiple, smaller entities—none so essential to the entire structure that it is indispensable.

Spitzer, a populist in a suit, decries the “concentration of power–political as well as economic–that resided” in the Big Finance institutions that have dragged the economy down. He writes:

Imagine if instead of merging more and more banks together, we had broken them apart and forced them to compete in a genuine manner. Or, alternatively, imagine if we had never placed ourselves in a position in which so many institutions were too big to fail. The bailouts might have been unnecessary.

In that case, vast sums now being spent on rescue packages might have been available to increase the intellectual capabilities of the next generation, or to support basic research and development that could give us true competitive advantage, or to restructure our bloated health care sector, or to build the type of physical infrastructure we need to be competitive.

This is the opposite of Rubinomics. Spitzer is contemplating what must be done to rebuild our economy so that it truly competes internationally and, most important, generates wealth–not what must be done to rescue the high-fliers who have crashed and who seem to hold our credit lines and economy hostage. It’s a perspective not heard within the mainstream too often these days. His views could have been influential when the first Wall Street bailout was pulled together in September–had he been part of the public discourse at the time and had he not been such a bad boy in the Mayflower Hotel.

I’m not often a fan of second acts for disgraced public officials. But in this instance, I’m glad Slate is sponsoring the Spitzer rehabilitation program. In fact, after reading his article, I’d be delighted if Barack Obama dumped Lawrence Summers and tapped Spitzer to be head of his National Economic Council.

Spitzer, after the fall he took, is not likely to rise so high. But he’s demonstrated he deserves a platform. Let’s hope the marketplace of ideas operates better than the marketplace of Wall Street and recognizes the merits Spitzer still possesses.