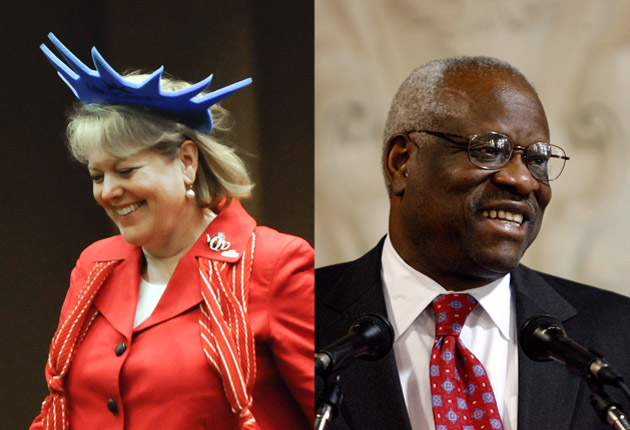 Virginia “Ginni” Thomas is no ordinary Supreme Court spouse. Unlike Maureen Scalia, mother of nine, or the late Martin Ginsburg, mild-mannered tax law professor who was good in the kitchen, Thomas came from the world of bare-knuckled partisan politics. Over the years, she has enmeshed herself ever more deeply in the world of political advocacy—all the while creating a heap of conflict of interest concerns surrounding her husband, Supreme Court Justice Clarence Thomas. Her role in Groundswell, the coalition of conservatives waging a “30 front war” against progressives and the GOP establishment that was revealed by Mother Jones on Thursday, revives questions about the propriety of Thomas’ activism on issues that have or could become the subject of Supreme Court cases.

Conflict of interest issues were first aired during Clarence Thomas’ confirmation hearings in 1991, when critics argued that Ginni Thomas’ political work might compromise her husband’s objectivity. At that time, her political resume included stints as a Capitol Hill aide to a Republican congressman; a staffer at the US Chamber of Commerce, where she fought the Family and Medical Leave Act; and as a political appointee at the Labor Department during the first Bush administration. Thomas didn’t leave politics after her husband was confirmed. “I did not give up my First Amendment rights when my husband became a justice of the Supreme Court,” she has said in the past. She would later return to the Hill as a staffer to House majority leader Rep. Dick Armey (R-Texas) and work for the Heritage Foundation, the conservative think tank. But in those jobs, Thomas kept a relatively low profile.

That changed around the same time that the tea party exploded in American politics, and Thomas became an outspoken member of the movement. In late 2009, Thomas founded the political advocacy group Liberty Central, which would later become a fierce player in the opposition to health care form. Detractors pointed out that Liberty Central was a potential vehicle for people with interests before the Supreme Court to make anonymous donations that might influence her husband.

The group was formed with a $500,000 anonymous donation that came as the Supreme Court was considering Citizens United, a case that ultimately resulted in loosening the restrictions on corporate giving to political campaigns. The anonymous donor was later revealed to be Harlan Crow, the Texas real estate developer. Crow was also a friend of Clarence Thomas’, and he was later linked to a scandal involving the justice’s failure to publicly disclose gifts from the developer and trips aboard his private jet. (It didn’t help that Justice Thomas had also failed to include his wife’s $150,000 annual salary from Liberty Central on his financial disclosure forms, which he later had to amend.) In January 2011, the good-government group Common Cause asked the Justice Department to investigate whether Justice Thomas should have recused himself from Citizens United based on his wife’s role at Liberty Central. (Common Cause also asked the IRS to revoke Liberty Central’s nonprofit status. Nothing came of either request.)

Thomas ultimately stepped down from Liberty Central, and the group merged with the Patrick Henry Center for Individual Liberty, a nonprofit started by former FBI agent Gary Aldrich (who’s best known for writing a book claiming that Bill and Hillary Clinton hung sex toys on the White House Christmas tree while Clinton was president). But she continued to be deeply involved with the opposition to Obamacare. She formed Liberty Consulting, which focused on health care issues, and, while never registering as a lobbyist, she began visiting members of Congress as an “ambassador” from the tea party movement. Due to her outspoken anti-Obamacare advocacy, and the fact that she was earning a living in connection with it, liberal activists called on Justice Thomas to recuse himself from ruling on matters related to Obamacare. He declined to do so and later joined the minority in voting to overturn the health care law, as he was widely expected to do.

The recent revelations about Thomas’ role in Groundswell will no doubt resurrect the debate over whether her advocacy causes conflicts for her husband. Gun safety, immigration, voting rights and voter ID, environmental concerns—all of these issues have been covered by Groundswell, and all of them are subjects that regularly come before the Supreme Court. (Ginni Thomas did not respond to a request for comment.)

Arn Pearson, vice president for policy and litigation at Common Cause, says that Thomas’ work with Groundswell raises “important questions about appearances of conflict, especially if the things she works on end up coming before the Supreme Court, and especially if [the members of Groundswell] end up getting involved in elections.” The work she’s doing now, he says, doesn’t pose quite the same conflicts as her anti-Obamacare advocacy, in which she was directly attacking a specific law whose future rested with the Supreme Court her husband sits on.

The broader problem, Pearson says, is that the Supreme Court has no real mechanism for dealing with possible conflicts of interest, because the high court has refused to subject itself to the same code of conduct that applies to the rest of the federal court system. That code spells out the rules judges must follow to avoid conflicts—rules that include not making speaking appearances at politically tinged fundraisers, as Justices Antonin Scalia and Samuel Alito have done in the past. Another rule requires federal judges to recuse themselves from cases in which a spouse has a financial interest, a provision that would seem to be relevant to the Thomases.

Democratic members of Congress, including Connecticut Sens. Richard Blumenthal and Chris Murphy and Rep. Louise Slaughter (D-N.Y.), are trying to remedy the situation with two bills that would bind the Supreme Court to the same ethics rules as lower court judges. The bills could be introduced as early as next week, but they don’t have a single Republican co-sponsor, making their future fairly dim.

One thing that may insulate Justice Thomas from potential conflicts over his wife’s work, in the near-term at least, is congressional gridlock. “I don’t know how we’re going to get any more conflicts out of Congress because they don’t pass anything,” Pearson says.