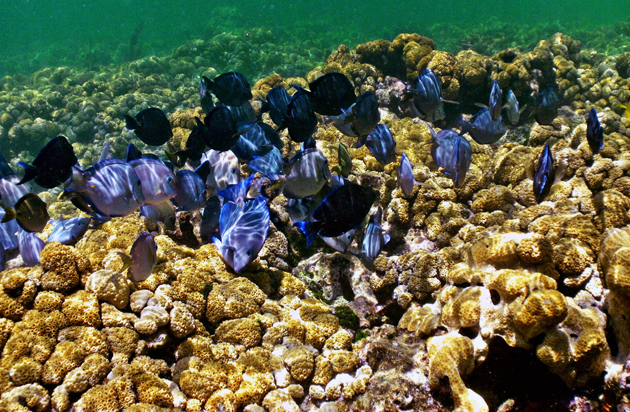 Natural reefs like this one in Florida protect billions of dollars in real estate, the study shows. <a href="http://www.flickr.com/photos/1stpix_diecast_dioramas/5739352524/sizes/l/in/photostream/">Phil's 1stPix</a>/Flickr

Among the hundreds of recommendations listed in Mayor Michael Bloomberg’s $20 billion plan to protect New York from climate change is a call to stock up on oysters. Not the kind you’d want to knock back with a nice pilsner on a Friday afternoon: The idea is to build large underwater oyster reefs around the harbor that could prevent coastal erosion and absorb storm surges. “Soft” infrastructure like this—reefs, wetlands, dunes, and other “natural” systems—is gaining in popularity over “hard” levees and sea walls as an effective way to insulate cities from sea level rise.

Turns out, some of the best of these defenses might already be in place: Yesterday the journal Nature published the first-ever nationwide maps that reveal just how much existing coastal habitats are going to save our butts from rising seas and wild storms. Remove reefs, coastal forests, marshes, kelp beds, and other coastal habitats, the study finds, and twice as much coastline and 1.4 million more people will be highly exposed to climate risks.

Stanford marine ecologist Katie Arkema and her colleagues pulled a vast trove of data—Census Bureau population stats; property values from real estate site Zillow; wave and wind exposure data from NOAA; published climate models; and maps of coastal ecosystems from the scientific literature—and mixed them together to visualize where these natural systems offer the most, or least, protection.

The map below shows where the greatest risk from sea level rise and storm surge will be in 2100, based on models from the 2013 National Climate Assessment. Red areas represent not just places where sea levels are projected to rise the most, but also factor in the presence of protective offshore habitats; the type of shoreline (beach, cliff, etc.); and the spot’s exposure to wind, waves, and other weather. Coastal southern Florida, for example, which is generally expected to get inundated by sea level rise, actually appears yellow, because of its abundant ocean-absorbing wetlands. Except Miami, that is: That city, the little red dot at the bottom right corner of the state, is still screwed. But things could be worse. The inset bar graph shows how many more people would be in high-risk red areas if those natural barriers were removed; in Florida, roughly an additional 300,000 people would be exposed, in New York another 300,000. 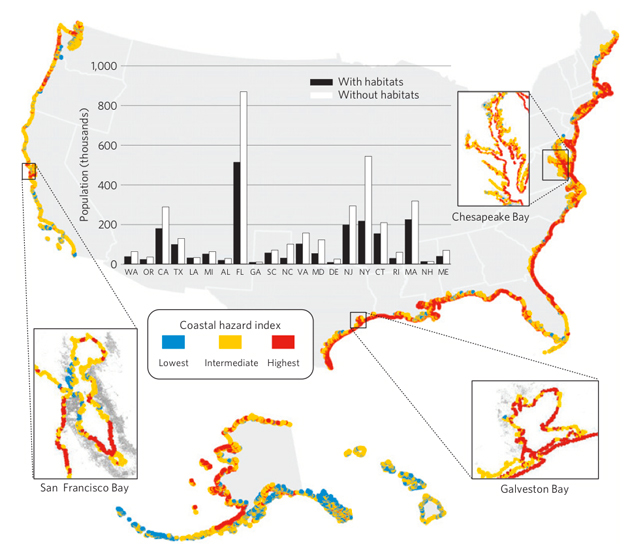 So how does that risk translate to a dollar value? In another map, Arkema summed up residential property values in every coastal county and laid them alongside each county’s relative level of protection; (a) shows today and (b) shows 2100. The shading indicates an estimate of the total value of property protected by natural barriers given the level of risk each county is exposed to. In (b), more counties become dark red as the level of risk increases with projected climate change. Put another way, these numbers represent the value of protection we get from the environment for free.

Finally, Arkema used demographic data to see how natural barriers serve to protect the poor and elderly, as a proportion of the total population in each county, from climate risks. Again, the left-hand maps represent current conditions, and on the right is 2100. Remove reefs from the Gulf of Mexico, and poor families along the cost would be disproportionately at-risk; pave over the wetlands in Florida and the elderly would get hit hardest by rising seas. 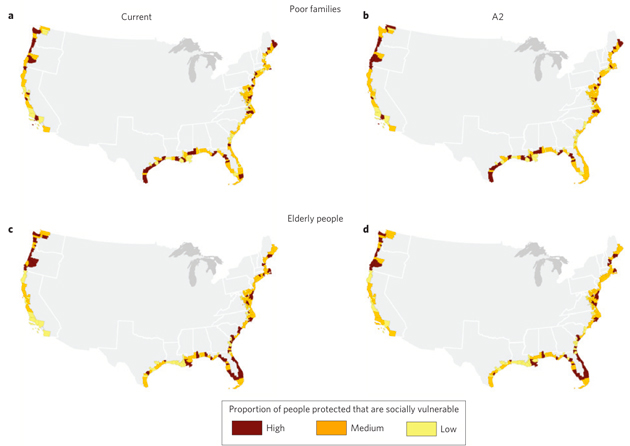 Taken together, Arkema says, the maps make a compelling case that protecting our coasts from climate change starts with protecting the natural systems that already exist.

“We want to ensure that we conserve the ecosystems where we have them, because if we lose them it’s going to require massive investment,” she says; in other words, schemes like Bloomberg’s, or FEMA’s faltering flood insurance program, could run an even higher bill. Pollution and development pressures, she says, mean “it’s unrealistic on a national level, but not on a local level, that we could lose all this habitat.”