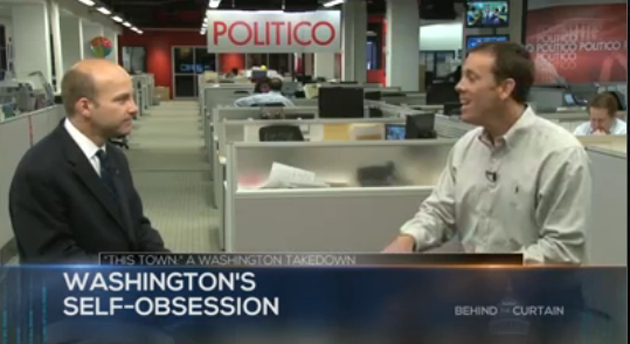 New York Times Magazine correspondent Mark Leibovich’s new book, This Town, is in many ways a story about Washington, DC’s obsession with itself. So it shouldn’t come as a total surprise that one of the book’s biggest targets, Politico, has been both its biggest critic and its biggest promoter. Since April, the outlet has published, by my count, 17 stories and items on the book, ranging from video segments to photo galleries to stinging critiques of This Town‘s cultural critiques.

It started in April, when Mike Allen and Jim Vandehei launched a preemptive salvo against Leibovich, whom they characterize as “at once a supremely confident and strangely self-conscious writer.” The duo known as VandeAllen wrote: “we thought we’d have some fun and do some reporting on his reporting on our friends, sources and subjects to find out who else should worry most about his book.” The story was accompanied by a video segment featuring the two reporters discussing Leibovich’s “incest book*,” with Vandehei noting that “if someone chronicled all the silly things I’ve said in the last 15 years, it would be a hoot!” There was also a slideshow of the suspected main characters of This Town, which included five people, one of whom was Leibovich. Their article was featured in Allen’s daily tip-sheet, Playbook—”Not out till July, but everyone’s talking.”

In July, as the book’s publication date neared, Politico flooded the zone. On July 3, media reporter Dylan Byers wrote that a bookstore had mistakenly begun selling copies of the “highly anticipated book about the way things work in Washington, D.C.” two weeks early. Later that day, he scooped that the Times would excerpt a portion of the book, which “is expected to unearth some unsavory details about key Beltway players, including super-lawyer Robert Barnett, media-insider Tammy Haddad, various former Obama aides and POLITICO’s own Mike Allen.” Byers’ review that night noted that “Leibovich is quoted as referring to [Politico] in the book as ‘the caffeinated trade site,’ ‘the emerging company-town organ for Political Washington,’ and ‘an organization of healthy self-regard.'” The following day, Allen covered the same ground, while quoting generously:

Politico often gets blamed for defining down and amping up political news today. The ‘haters,’ as Politico’s editors call their critics, are often the same Washington insiders whom the publication reports on – and who read the thing religiously… Politico is an organization of healthy self-regard.

On July 5th, Allen quoted 985 words of Leibovich’s forthcoming New York Times Magazine excerpt (previously reported in Politico), and colleague Mackenzie Weinger compiled a guide to “Who’s up, down in ‘This Town'” which notes that Allen “is cast as an ‘enabler’ of journalistic groupthink, according to the Post’s review.” Another story that day flagged a list of talking points produced by the White House on top aide Valerie Jarrett. Byers took on a New York Times review which had generated controversy in this town for its suggestion that Washington has neither good pizza nor delicious sandwiches (it has both, but let’s not do this again). After a long weekend, he revisited the subject, concluding that This Town demonstrates the need for another Tim Russert “not just to make The Club feel better, but to improve its standing with the rest of nation.”

Tuesday was a new day, which meant a new video of Leibovich discussing his book with reporter Lois Romano, who pressed him on whether he’d broken any “unspoken code” by reporting on the people he rubbed elbows with in social settings. On Wednesday, Allen flagged a piece by the Huffington Post‘s Michael Calderone, which noted that “VandeHei is mentioned 16 times in the book, more than the aforementioned 17 Times editors, reporters and columnists combined.” By Thursday, Romano’s interview had been converted into a think piece, excerpted in Playbook, about the chilling effect of This Town on the social scene of “a town that shuns wannabes and impostors”—a previously unknown stereotype of Washington, DC.

Lest you think Politico has reached peak self-obsession, though, consider this: the book just came out on Tuesday.

*There is no incest in This Town.