The Dodd-Frank financial reform act of 2010 turns three years old this month. But because of intense Wall Street lobbying, only about a third of the provisions it requires have actually been made into rules by Wall Street regulators, and many have gaping loopholes designed by industry lobbyists. A new analysis by the Sunlight Foundation, a non-profit that advocates for government transparency, starkly illustrates why regulatory agencies are so swayed by industry: over the past three years, those whose job it is to police Wall Street have met with big banks 14 times more often than pro-reform groups to discuss proposed Dodd-Frank rules.

The Sunlight Foundation reviewed three years worth of meetings that banks, industry lobbyists, corporations, and financial reform advocacy groups had with the Commodities Futures Trading Commission (CFTC), the Treasury Department and the Federal Reserve, and found that these regulators had met 2,118 times with financial institutions, and only 153 time with pro-reform groups. Here’s what that looks like, via the Sunlight Foundation: 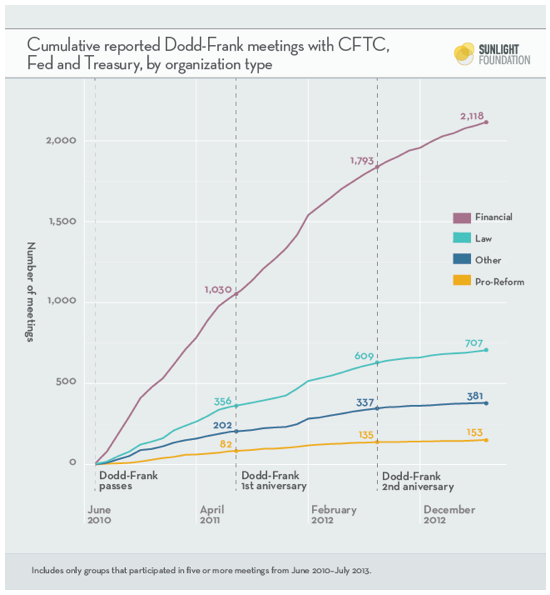 And here is how those meetings break down by agency: 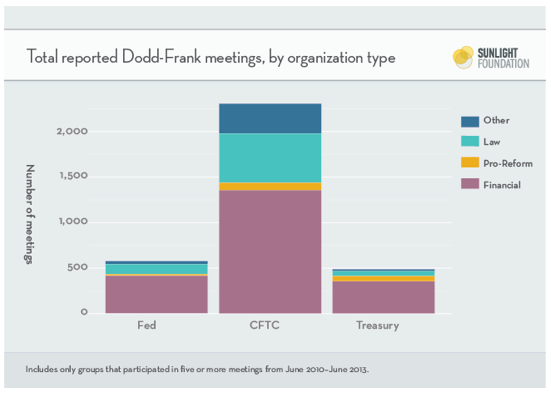 Goldman Sachs, the top meeting-goer, had 222 consultations with regulators over the past three years. JPMorgan Chase met with the agencies 207 times, and Morgan Stanley 175 times. The topics at those meetings were most likely to be derivatives (financial products with values derived from from underlying variables, like crop prices or interest rates), which Dodd-Frank brought under regulation for the first time, and the Volcker rule portion of the law, which would limit risky trading by banks.

From the Foundation’s report:

Regardless of how we cut the data, the same striking pattern holds: financial institutions, especially the big banks, are dogged and ubiquitous. Pro-reform groups are stretched thin. Lawyers and lobbyists are also active participants, primarily representing the banks. A number of other corporations show up frequently, most commonly in the energy and agro-business sectors, where derivatives and other market hedges are common practice.

Because of the barrage of industry lobbying, “Regulators themselves have become overly concerned about finalizing rules,” CFTC commissioner Bart Chilton told Yahoo News recently. “Over-analysis paralysis, fears of litigation risks, and the lack of people-power have all contributed to the slowdown.”

Strong-arming regulators behind the scenes is just one tactic Wall Street uses to get its way. Litigation, and new legislation to gut the 2010 financial reform law play a part too. As a result, Chilton says, “Much of Dodd-Frank is dying on the vine.”