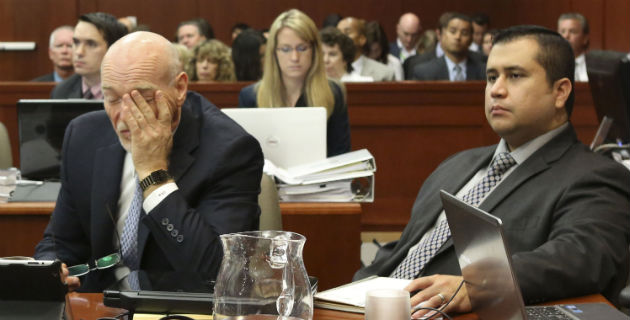 As George Zimmerman’s much-watched trial winds down, speculation has whipped up in the conservative media and elsewhere about how people—that is, black people—will react if the killer of 17-year-old Trayvon Martin is acquitted. The implication is that if Zimmerman goes free, this racial powder keg of a case could explode into riots.

Ever since Zimmerman shot the unarmed teenager last year after a scuffle in a gated community in Sanford, Florida, the case has been racially fraught. Supporters of the Martin family portrayed Travyon’s death as a clear incident of racial profiling and questioned the actions of the Sanford Police Department, which was criticized for initially dismissing the incident as a self-defense case and declining to arrest Zimmerman until more than a month after the shooting. Many on the right, by contrast, have cast Zimmerman as a poster child for Second Amendment rights and a victim of the liberal media.

As the prosecution and defense have argued over who started the fight, who is it that can be heard screaming for help on the 911 call, and whether Zimmerman’s life was in danger before he pulled the trigger, commentators and pundits on cable news and in social media have talked of possible riots if Zimmerman is not convicted.

Bill O’Reilly recently asked guests on his show whether a not-guilty verdict would cause people to “run out and cause trouble,” or worse, “damage the fabric of the nation.” The Washington Times ran an online poll Wednesday asking readers, “Will there be riots in Florida if George Zimmerman receives a not-guilty verdict by a jury of his peers?” Seventy-four percent said yes. Sean Hannity had Mark Fuhrman (of O.J. Simpson trial fame) on his show this week and asked him the same question. His response, according to Newshounds, a Fox News watchdog site: “I just think it’s kind of pathetic that a court of law cannot be in a vacuum of the legal system without the influence of the public threatening to do great bodily harm to people and property. It’s really a pathetic statement for our country.” Last October, speculation that African Americans would riot from coast to coast if President Barack Obama lost to Mitt Romney swept conservative news sites.

So why all the fear of angry black mobs? In a recent Time column, Marc W. Polite notes that the last major race riot was in Los Angeles two decades ago, and African Americans have reacted peacefully to several recent racially charged verdicts, including the acquittal of the policeman who killed Sean Bell, a New York City man who was shot by cops while leaving his bachelor party. There have been more instances of nonviolent reactions to divisive trials than violent ones. And yet, when it comes to blacks and criminal justice, the riot question remains. That it keeps getting asked without any actual evidence that a riot will occur might say more about the biases and fears of the people asking than it does about African Americans.

Darnell Hunt, a sociologist and the director of the University of California-Los Angeles’ Ralph J. Bunche Center for African American Studies, says it’s no surprise that certain people who “believe in the legitimacy of the system” are afraid of the actions of people who may believe the system has failed them. “It’s a theme that emerges whenever there’s a highly charged event that resonates with racial conflict and racial concern,” Hunt notes. “I’m not surprised that folks who are attempting to sort of sensationalize what’s going on right now would raise that particular trope again.”

If Zimmerman is acquitted, people will be upset, but they will find other avenues to show their dissatisfaction. The black community has become more sophisticated in protesting injustice, and there is talk already of using economic boycotts and other means that are more effective than upheavals that would only result in heavier police repression. Should Zimmerman walk, the response will be long-term and focused on ending Stand Your Ground so that this cannot happen again. After all, this case probably would not even have come to trial without the sustained outpouring of protest—all of it non-violent.

Whether it’s hockey fans setting fires in Vancouver after a loss or urban blacks busting up storefronts to protest what they see as a failed justice system, riots are hard to predict, says Hunt. For instance, then-President Bill Clinton was reportedly briefed on security measures for a post-O.J. Simpson trial riot that never occurred. A not-guilty verdict for Zimmerman does have the potential to create what have historically been the common circumstances for racial civil unrest: a collective lack of faith in the system, the widespread view that a specific community’s concerns aren’t being heard, and the belief that racial profiling by police or vigilantes has gone unchecked. Yet all that need not lead to a violent situation, especially if people and community leaders channel anger and frustration into other forms of action. And so far the Trayvon Martin case has seen peaceful protests, such as the Million Hoodie March, and much venting of outrage via Twitter, where there’s been constant chatter among black tweeters about the Zimmerman trial.

Racist fear-mongering, a valid threat, or something in between, law enforcement in South Florida isn’t taking chances. Without actually mentioning the word “riot,” the Broward County Sheriff’s Office has released two public-service announcements in which teen spoken-word artists, local law enforcement, and Miami Heat player James Jones implore people to “raise your voice, not your hands.”

“We don’t have information about a specific event that might take place at the conclusion of the trial,” Sheriff Scott Israel said in a press release, “but we encourage everyone to keep any protests peaceful.”

The sheriff’s office has reached out to community groups and black clergy to encourage peaceful protests. The office is also staying in contact with the Sanford Police Department and Miami-Dade law enforcement, says Public Information Officer Keyla Concepcion. She compares their actions to preparations for hurricanes and tropical storms. “You just try to think and strategize ahead of time,” she notes. “Even though it’s unknown, you try to anticipate possible situations. We go through that every single year we’re faced with hurricane season.”

But since Martin was killed more than a year ago, there’s been no storm of racial unrest among black Americans, just nonviolent protests and petitions. Why wouldn’t that sort of productive response continue after the trial? Yet a prediction of a calm response to a Zimmerman acquittal wouldn’t further a convenient narrative about blacks and violence, and it’s not as exciting a story as a massive race riot. Still, it’s the reality conservative pundits need to make peace with.