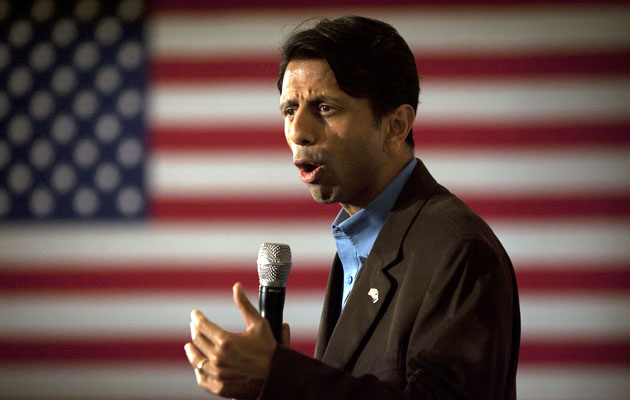 Bobby Jindal isn’t happy with BP’s faltering response to the 2010 Deepwater Horizon oil spill, and he isn’t shy about letting them hear about it. At an event on Wednesday, the Governor of Louisiana blasted the company for spending “more money on television commercials than they have on actually restoring the natural resources they impacted.” Three years after the spill, in which a drilling rig blowout killed 11 men and poured 4 million barrels into the gulf, BP has started to push back on damages claims, and Jindal seems determined to make the company pay for it.

Addressing the Gulf Coastal Ecosystem Restoration Council (GCERC) Jindal said, “BP needs to stop spending hundreds of millions of dollars on their public relations campaign telling us how great they are and start proving it by addressing their Clean Water Act and Natural Resources Damage liabilities now.” The GCERC is responsible for allocating money from the Clean Water Act fines paid after the Deepwater spill to restoration and economic recovery projects, and controls about 60 percent of the funds from those fines.

With the $8 billion dollar damages fund that BP set up after the spill has dwindled now looking like it will fall as much as $6 billion short, the company has rolled out a PR campaign alleging that it has been the target of fraud. BP has requested, and twice been denied, that the federal judge who presided over the settlement negotiation freeze payments until a state appointed investigator can look into potentially fraudulent claims, with the most recent refusal coming on Wednesday. Earlier this summer, the company set up a hotline for residents to “do the right thing” and report fraudulent claims (1-800-NO-2-FRAUD), and took out full-page ads in three of the county’s largest newspapers pleading the case for honesty and fairness. (“Whatever you think about BP, we can all agree that it’s wrong for anyone to take money they don’t deserve,” the ad read. “And it’s unfair to everyone in the Gulf—commercial fishermen, restaurant and hotel owners, and all the other hard-working people who’ve filed legitimate claims for real losses.”)

BP’s cries of foul play have found some sympathetic ears. In June, Bloomberg Businessweek ran a cover that read “BP is getting rolled in the Gulf,” with a story cataloging the injustices that the company was up against: a feeding frenzy for settlement money, fraudulent claims, an uncooperative judge, and a generally unsympathetic public. And on top of it all, the line that BP has been spending more on commercials than on ecological restoration has become a familiar refrain coming from the governor’s office, which the company has called “both false and irresponsible.”

“Today we are working to ensure that our willingness to do the right thing is not taken advantage of and distorted to provide windfalls to undeserving businesses, including law firms,” said BP spokesman Geoff Morrell in a statement earlier this week. The company has paid some $25 billion thus far, and is staring down another $3.5 to $17.5 billion, depending on a court ruling on the company’s level of negligence.

But before Jindal gets a reputation as some kind of environmental hero, note that earlier this month he asked the courts to kill a lawsuit by the Southeast Louisiana Flood Protection Authority–East that hits many of the same issues that have him so fired up at BP. This might very well pan out just like things did after the spill, when critics pointed out that his sharp response had been overshadowed by his support for the kinds of anti-regulatory policies that had facilitated the blowout. It could be that the governor has found a good target, but his bluster doesn’t match his politics.

Update, 8/30/2013: In response to governor Jindal’s criticisms, Morrell released this statement: “Governor Jindal and his aide Garret Graves have completely misrepresented BP’s record in the Gulf as well as the legal framework under which further funding related to the Deepwater Horizon accident would become available. Their political grandstanding contains patently false assertions, defies the demonstrated record of environmental recovery that has occurred across the Gulf, and defames the massive efforts of tens of thousands of people to foster prompt recovery and restoration. Not that BP or anyone else should be surprised—these recent comments are their latest in a series of over-the-top statements and overblown demands since the accident.”