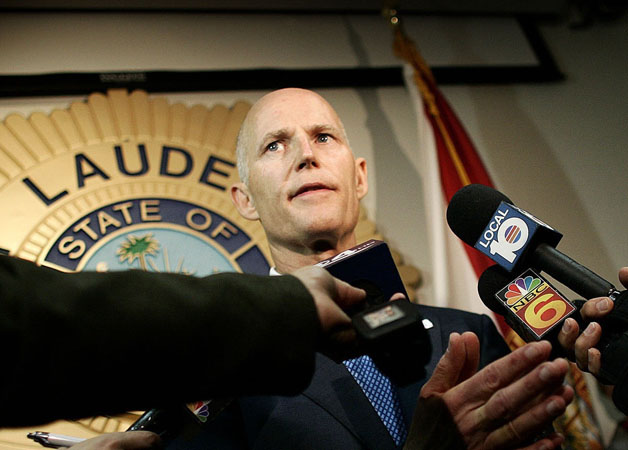 *Update: The US Supreme Court denied Ferguson’s motion to halt the proceedings, and at 6:17 p.m. Monday night, Florida executed Ferguson. His last words were, “I am the Prince of God and I will rise again.”

Florida’s Republican Governor Rick Scott is making a big push to expedite the executions of many prisoners who are currently on the state’s death row. He’s signed five death warrants this year (three within a four-week span this spring), a pace rarely seen since the death penalty was reinstated in 1976. One of the condemned is John Ferguson, who’s set to be executed on Monday. Ferguson is a notorious killer who has been on death row for more than 30 years. He’s also a paranoid schizophrenic who thinks he’s the “Prince of God.”

Scott’s decision to move forward with Ferguson’s execution has spurred his lawyers, supported by the National Association for Mental Illness and the American Bar Association, to petition the US Supreme Court to intervene. Because he’s mentally ill, they argue, his execution would violate the Eighth Amendment’s prohibition on cruel and unusual punishment. The court has until Monday to stay the execution or allow it to proceed.

The justices in recent years have ruled that states can no longer execute juveniles and the mentally retarded. And in 2007, the court issued an opinion in Panetti v. Quarterman attempting to make it more difficult to execute the mentally ill. The court said states can no longer execute mentally ill people just because they recognize that they’re going to be executed and know the reason for it. They must have a “rational understanding” of the impending execution and its cause. Otherwise, the main justification for capital punishment—retribution—can’t be satisfied.

The distinction between those two criteria isn’t especially clear, and legal critics have argued ever since that the decision was too vague to prevent states from executing people who are delusional, psychotic, or otherwise seriously mentally ill. Indeed, the decision hasn’t taken many mentally ill people off death row. Even Scott Panetti, the schizophrenic and bipolar Texas man who represented himself in court dressed as a cowboy and referring to himself as “Sarge” (while subpoenaing Jesus Christ), is still there, despite having his named attached to the important Supreme Court ruling.

Ferguson is the latest death row inmate to challenge the Supreme Court to clarify its earlier ruling on what constitutes a “rational understanding” of an impending execution. His case should give the high court a lot to chew on. Ferguson’s story, and long-documented record of mental illness, starts back in 1965, when records show Ferguson was suffering from hallucinations. In 1971, he was committed to a state mental hospital after being diagnosed as a paranoid schizophrenic. For the next several years, court-appointed doctors repeatedly reported that Ferguson was psychotic and in need of long-term hospitalization.

In 1975, a court-appointed psychiatrist reported that Ferguson was “suffering from a major mental disorder and is extremely dangerous to himself and others. He is dangerous to the point where he is considered homicidal… He should be in a maximum security ward… He should not be released under any circumstances.”

Yet the state released Ferguson from the hospital in 1976. The next year, he and two accomplices murdered six people during a robbery, and shot another woman who survived the attack. Less than six months later, Ferguson killed a 17-year-old couple pulled over on the side of the road.

Ferguson’s mental health was an issue in his prosecution for the high-profile cases, but ultimately he was found competent to stand trial and convicted. But during his years in prison, Ferguson had many documented psychotic incidents, including one in which he became so paranoid he lost 20 pounds in 10 days and had to be hospitalized. His mental health has been assessed occasionally in connection with post-conviction appeals, most recently in the fall of 2012, after Scott signed a death warrant ordering his execution that October.

As required by Florida law, Scott appointed three psychiatrists to a commission charged with determining Ferguson’s competency to be executed. The commission was ordered to examine Ferguson on October 1 and offer a full report the very next day. After a brief exam and a selective reading of his medical records—all selected by the state—the psychiatrists submitted a one-and-a-half page report by 4 p.m. the same day finding that Ferguson was faking his symptoms and wasn’t mentally ill. They admitted that Ferguson told them he had been anointed the “Prince of God” and would rise after his death to be at the “right hand of God,” the same delusions he’d reported having for 40 years, and which were documented in his medical history.

In addition, one of the experts hired by Ferguson’s defense team, Dr. George Woods, testified before the commission that the inmate believed that his long-dead father was still alive, communicating with and protecting him. He also testified that Ferguson thought that his long stint on death row was a plot by the state to “prevent him from ascending to his rightful throne as the Prince of God.” Woods also noted that Ferguson thinks the state can’t kill him because he has “special powers,” as does his dead father, and that he will be resurrected to play a divine role in fending off a Communist plot to take over the United States.

The state circuit court, which reviewed the case, disagreed with the commission and found that Ferguson was indeed a paranoid schizophrenic who was not faking his 40-year delusion that he was the Prince of God. But it found him competent to be executed anyway, a decision affirmed by the state supreme court. The courts relied on a competency standard spelled out in a 2000 case that allowed Florida to execute a man who believed he was being put to death because he was Jesus, a standard, Ferguson’s lawyers argue, that the US Supreme Court specifically forbid in its 2007 ruling.

Ferguson appealed to the 11th Circuit Court of Appeals arguing that the Florida courts were essentially thumbing their noses at the US Supreme Court by refusing to change their practices in light of Panetti. In May, a three-judge panel upheld the Florida decision. The panel included Judge William H. Pryor Jr., a George W. Bush appointee whose nomination was initially filibustered over charges that he was a right-wing religious zealot.

The opinion includes a lengthy discussion of how believing in life after death doesn’t make someone crazy enough to avoid execution. “If it did mean that, most Americans would be mentally incompetent to be executed,” the judges wrote. The court went on to lay out the various views on the afterlife of everyone from Tibetan Buddhists to Zoroastrians and ancient Egyptians, declaring:

A conclusion that a particular belief about the afterlife and one’s role in it is extreme enough to be irrational, delusional, and indicative of incompetence to be executed is only a few steps away from the same conclusion about any person who believes in resurrection, in heaven or hell, or in any variation of life after death. Courts should be reluctant to treat as a symptom of mental illness anyone’s belief about what will happen to him after he dies.

Last week, Rick Scott set August 5 as a new execution date for Ferguson, and his lawyers have asked the US Supreme Court to step in. The American Bar Association and the National Alliance on Mental Illness (NAMI) have filed amicus briefs on Ferguson’s behalf.

To illustrate that mentally ill people can be both insane enough not to rationally understand a coming execution, and yet rational enough to, say, file complaints about prison food or comprehend they’re about to be executed, NAMI’s brief cites the story of schizophrenic Nobel Prize winner John Nash, the subject of the Russell Crowe movie A Beautiful Mind. Nash, the brief notes, was able to develop his complex mathematical theories even as he also believed outer space aliens were trying to recruit him to save the world. If a “prisoner sincerely believes that he is being executed because he is Jesus Christ, rather than because he murdered another human being,” he can’t be put to death merely because he understands the “process” of execution.

Ferguson’s odds of avoiding the needle aren’t particularly good. Last year, lawyers made similar arguments in an effort to spare Edwin Turner from execution in Mississippi. Like Ferguson, Turner had killed two people shortly after being released from a mental hospital. Nonetheless, the Supreme Court declined to intervene and he was put to death last year.