Update: Here is a full transcript of Eric Holder’s prepared remarks and here is the corresponding memo he issued to US attorneys.

“This is a win for people concerned about overfederalization as well as overcriminalization—we just can’t keep making a federal case and a 10-year federal prison stay out of all these nonviolent drug offenders,” says Monica Pratt Raffanel, a spokesperson for Families Against Mandatory Minimums (FAMM). “States can handle drug offenders like these and, in many instances, give them better access to the treatment and supervision they need to turn their lives around.”

The way the law stands now, drug offenders caught with a certain amount of illegal drugs automatically face years in prison. A person arrested with one gram of LSD, for example, will face a 5-year mandatory minimum without parole, the same sentence doled out to Americans caught with 100 marijuana plants (see full chart below). Civil liberties advocates argue that these minimums are Draconian, expensive, and don’t give judges discretion to make sure the punishment fits the crime. 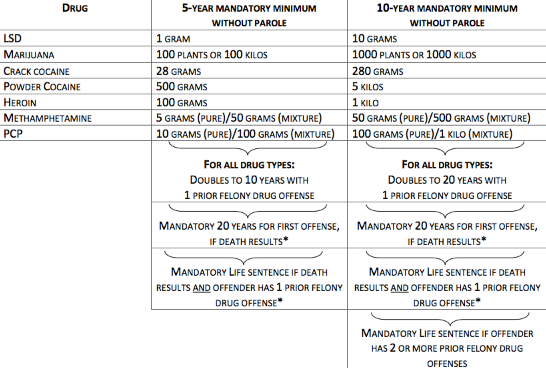 As the Post notes, under Holder’s new policy, mandatory minimums as they apply to specific quantities of drugs will no longer be used against offenders whose cases do not involve violence, a weapon, and selling to a minor, and they will also not be used against offenders that do not have a “significant criminal history” and ties to a “large-scale” criminal organization. A bill introduced by Sens. Patrick J. Leahy (D-Vt.) and Rand Paul (R-Ky.) in March would codify Holder’s recommendations, giving judges the ability to hand out sentences lower than the current mandatory ones. As Molly Gill, government affairs counsel for FAMM explains, “DOJ policies change with administrations–what is really needed is a full-scale reassessment of this system by Congress, to fix this problem for good.”

Based on how Republicans have reacted to sentencing reform efforts in the past; it shouldn’t take long for conservative lawmakers to start spreading the word that the sky is falling. But as we reported last week, sentence reductions have already been retroactively applied to crack cocaine offenders—and the US Sentencing Commission has found the program to be a success. At least 7,300 prisoners sentenced under mandatory minimums have had their sentences reduced by an average of 29 months, saving taxpayers an estimated $530 million. Given that the Associated Press found that US federal prisons are 40 percent over capacity, advocates say reform can’t come soon enough.

To see how states have already been implementing sentencing reforms for crack cocaine offenders, check out the map below (unshaded parts mean that no data is available):