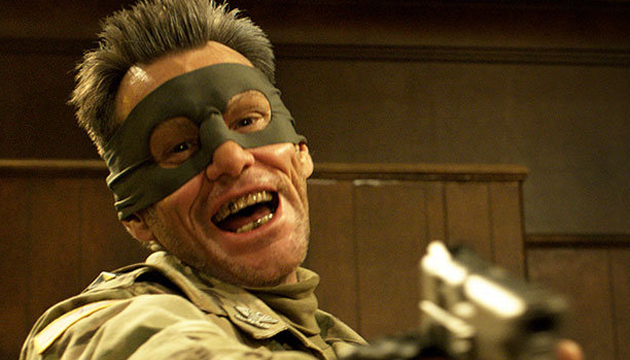 Following the December massacre in Newtown, Connecticut—in which 20 schoolchildren were gunned down at Sandy Hook Elementary—there were a lot of well-intentioned but shallow efforts by the entertainment industry to strike a chord of sensitivity. As everybody knows, violent movies mean big bucks for major movie studios. But in the wake of widely publicized tragedies, Hollywood stars and executives generally don’t want to be seen as callous.

After Newtown, the LA premiere of Quentin Tarantino‘s brutally violent Django Unchained was canceled, and Django star Jamie Foxx even cautioned against gratuitous violence in cinema. On television, the debut of reality TV special Best Funeral Ever was postponed, and Ted Nugent’s celebration of gun culture was nixed from the Discovery Channel. And on commercial radio, Foster the People’s “Pumped Up Kicks” and Ke$ha’s “Die Young” received substantially reduced airplay, due to lyrics involving children and death. It’s the standard outpouring of PR gestures, however meaningless they turn out to be.

One entertainer, however, took things further than a simple one-off gesture. Actor Jim Carrey saw this as his cue to wage an offensive on gun culture in America. In February, Carrey tweeted that anyone “who would run out to buy an assault rifle after the Newtown massacre has very little left in their body or soul worth protecting.” In March, he starred in a somewhat controversial Funny or Die music video that was harshly critical of gun owners and actor and NRA president Charlton Heston. He remained vocal on the matter, and in June he announced that he would not be promoting his next movie: the bullets-and-blood-filled superhero movie Kick-Ass 2, the sequel to the critically acclaimed 2010 Kick-Ass. “I did Kickass a month [before] Sandy Hook and now in all good conscience I cannot support that level of violence,” the actor wrote. “[M]y apologies to others involve[d] with the film. I am not ashamed of it but recent events have caused a change in my heart.”

In the film, Carrey plays Colonel Stars and Stripes, a former mob enforcer who became a born-again Christian/tough-as-nails vigilante hero. “Family living in the street deserves a hot meal; inebriated college girl deserves to make it home safe at night,” the Colonel tells his crew of superheroes, reminding them why they do what they do. Although the Colonel enacts brutal justice against human traffickers and murderers, he maintains a personal policy of not firing guns. (That fact was actually one of the things that initially intrigued Carrey about the role.)

Others in the Kick-Ass 2 cast and crew didn’t seem too broken up about Carrey’s big announcement. “Jim is a passionate advocate of gun-control and I respect both his politics and his opinion, but I’m baffled by this sudden announcement as nothing seen in this picture wasn’t in the screenplay eighteen months ago,” Mark Millar, writer of the original Kick-Ass comic books, wrote. “Our job as storytellers is to entertain and our toolbox can’t be sabotaged by curtailing the use of guns in an action-movie.” (Millar later said that all the publicity generated by Carrey’s decision might even boost box office returns: “For your main actor to publicly say, ‘This movie is too violent for me’ is like saying, ‘This porno has too much nudity.’ We’ll have to go and see this now.”) Director Jeff Wadlow responded similarly: “He is entitled to have his own opinion, and he’s entitled to change his opinion. Ultimately, I really believe his performance speaks for itself.”

But Carrey’s co-star, the 16-year-old Chloë Grace Moretz (who plays the foul-mouthed efficient killer Hit-Girl), who had the sharpest response to the Carrey Affair. From her interview with the Sun:

It’s a movie. If you are going to believe and be affected by an action film, you shouldn’t go to see Pocahontas because you are going to think you are a Disney princess…[Y]ou might see The Silence of the Lambs and think you are a serial killer. It’s a movie and it’s fake, and I’ve known that since I was a kid. I don’t want to run around trying to kill people and cuss.

She also talked about how she respects Carrey’s choice, and how he “had a change of heart, and that’s his thing.”

So because of Carrey’s emotional and visceral reaction to the a mass murder, these recent months of publicity for Kick-Ass 2 have certainly taken on a vastly different shape than anyone could have expected at the onset. But that’s not the end of the story. Apparently, the marketing of the film was changed, too. As the Hollywood Reporter noted last month, a promotional still featuring Moretz had been altered to remove two large assault weapons in the background—the type of gun that Carrey finds so repulsive. “The still featuring Hit-Girl…originally featured two assault-style weapons when [we] downloaded the photo July 10…[but by July 26], the still had been replaced,” THR reported. Check out the before-and-after: 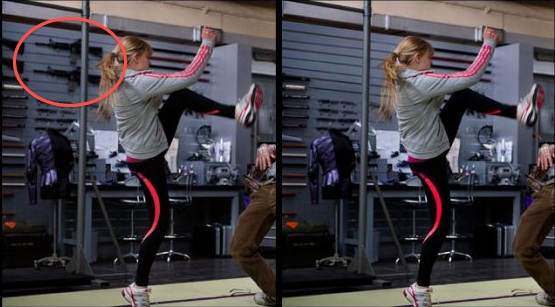 Universal Pictures’ publicity team for Kick-Ass 2 did not respond to Mother Jones‘ multiple requests for comment regarding the alteration.

Now here’s a trailer for Kick-Ass 2:

Kick-Ass 2 gets a wide release on Friday, August 16. The film is rated R for strong violence, pervasive language, crude and sexual content, and brief nudity. Click here for local showtimes and tickets.