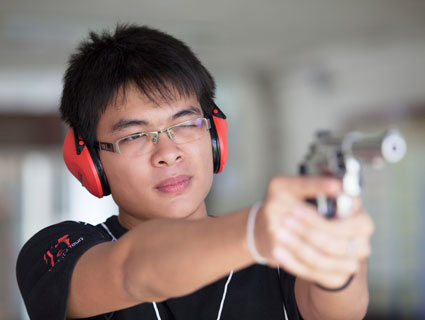 Last week, the National Rifle Association filed a petition with the Supreme Court (PDF) asking it to strike down a ban on the sale of handguns to people who are at least 18 and younger than 21. The NRA, which sued the Bureau of Alcohol, Tobacco, Firearms and Explosives in 2010 over the age restriction, argues that it denies young adults their Second Amendment right to self-defense by suggesting without sufficient evidence that they are too irresponsible to own handguns.

The US Court of Appeals for the Fifth Circuit ruled last year that the restriction was “consistent with a longstanding tradition of targeting select groups’ ability to access and to use arms for the sake of public safety.” It also acknowledged that Congress found people below the age of 21 to be “relatively immature and that denying them easy access to handguns would deter violent crime” (PDF). The Supreme Court has never considered the restriction since it became law as part of the Gun Control Act on 1968.

The NRA’s petition, filed with two 19-year-olds, questions whether “a nationwide, class-based, categorical ban on meaningful access to the quintessential means to exercise the right to keep and bear arms for self-defense can be reconciled with the Second Amendment, the equal protection guarantee, and this Court’s precedents.” The petition argues that the appeals court’s ruling contradicts the Supreme Court’s 2008 decision in DC v. Heller that affirms the right to own a handgun for self-defense, and the Supreme Court’s 2010 decision in McDonald v. Chicago that applies the Heller decision to every state.

Adam Winkler, a UCLA law professor who studies Second Amendment cases, predicts that the Supreme Court—if it even decides to hear the case—will uphold the restriction because of its tendency to be deferential to state and federal lawmakers on gun control. The court hasn’t reviewed a gun control case since 2010 and has turned down at least six since 2008. But if the court decides to review the case, the decision may be close because the NRA has a relatively strong argument, Winkler says.

On the other hand, the defense would have a variety of arguments for the law’s public safety merits. Risky behavior, which teenagers engage in more than older people, leads to increased gun accidents and violence. Greater access to guns would likely increase suicide rates among at-risk youth, and people between the ages of 18 and 24 are responsible for more gun homicides than any other age group.

One complicating factor that may improve the NRA’s case is that the so-called gun-show loophole that Congress failed to close earlier this year already allows people between the ages of 18 and 21 to buy handguns. Federal law prohibits them from buying guns from federally licensed dealers but not from private sellers at gun shows or on the internet. “That strongly undermines the value of the law, and I think helps the NRA,” Winkler says. “Their argument’s made stronger by the fact that you can’t buy a gun from a federally licensed dealer, but you can buy a gun from anyone else.”

Still, Winkler says, “In general I think the idea of keeping people who are too young to use firearms responsibly from getting their hands on guns is a perfectly legitimate government objective.”