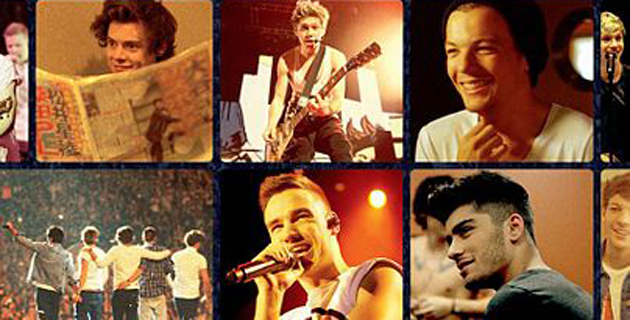 One Direction: This Is Us
TriStar Pictures
92 minutes

One Direction, the English/Irish boy band sensation that is worth roughly a billion dollars, has a new documentary in theaters. The 3D film examines the five members‘ lives on and off the arena stage, portraying them as normal, down-to-earth people who love their families and are bemused by bowls of Japanese food. It’s produced by Simon Cowell and directed by Morgan Spurlock, the same guy who did Super Size Me, made a documentary on The Simpsons and failed to track down Osama bin Laden in this critically tarred mess of a movie.

One Direction has sold 30 million records and the boys have been invited to the White House by First Lady Michelle Obama (they couldn’t make it, though). But the really important thing about One Direction is that they are venerated by a violent, ravenous international cult of adolescents.

Cultists, collectively known as “Directioners,” are terrifying. When the UK edition of GQ featured the group on its September 2013 issue, the magazine was flooded with ALL-CAPS death threats from Directioners who thought the covers unfairly painted band members as promiscuous and arrogant. Directioners engage in all-out war on Justin Bieber fans—a.k.a. “Beliebers“—deploying verbal abuse, degrading memes, and worldwide-trending hashtags. One Direction has reportedly employed Iraq War vets and former members of President Obama’s security detail for protection against excessively devoted fans and other existential threats.

Which brings us to the documentary. On the morning of August 3, Pacific Theatres at the Grove in Los Angeles hosted an advance screening of This Is Us. Directioners, some of whom had camped out since the middle of the night, lined up outside the shopping mall for a chance to see the movie. And when hundreds of fans were denied entry away due to limited seating, all hell broke loose and the LAPD were called in to use brutal force against the rioting children.

Chaos was unfolding just outside the theater doors.

Just as Lizette Van Patten, her 13-year-old daughter and a 14-year-old friend were about to enter the theater, hundreds of mostly young female fans who had been turned away burst through the theater entrance.

“They charged and went straight past the ticket takers for the doors of the actual theater screaming, ‘Let us in! Let us in!'” recalled the 40-year-old San Pedro resident. “It took about a half an hour before a police car came with two policemen in it. They started palming kids down and shoving them outside.”

Allysa Mae De Guzman, 16, was part of the mob. She said that when she and her friends were told they wouldn’t be able to see the movie, they all began running toward the theater anyway.

“When I got inside, the red ropes that block the entrance to the theater were on the floor,” she said. “It was pretty scary because people were tripping on the floor and pushing and stuff like that.”

Van Patten said her daughter was so upset she didn’t get to see the movie that she left the Grove with mascara streaks running down her face.

“I’ve been to plenty of premieres and have seen people go crazy over Johnny Depp and Tom Cruise,” she said. “But nothing like this. Now I’m really convinced that One Direction is like the Beatles of this generation.”

So if you see the movie this weekend and end up enveloped by charging throngs of enraged schoolchildren, know that this isn’t without precedent or warning. Now here’s a trailer for it:

One Direction: This Is Us gets a wide release on Friday, August 30. The film is rated PG for mild language and crimes against humanity. Click here for local showtimes and tickets.