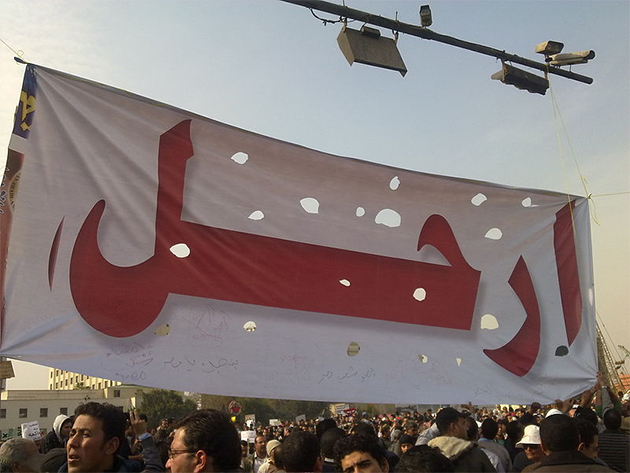 This story, which first appeared on the ProPublica website, has been updated to reflect new developments. It was first published on Jan. 31, 2011.

Questions about the United States’ aid to Egypt have intensified in the wake of last month’s military coup. More than 1,000 Egyptians have been killed in the last week, most apparently supporters of ousted president Mohamed Morsi. A few members of Congress have called for cutting off aid to Egypt, which the White House says is under review.

We’ve taken a step back and tried to answer some basic questions about the aid, including how much the US is giving Egypt, what’s changed in the years since the Arab Spring and what all the money buys.

How much does the US spend on Egypt?

Egypt receives more US aid than any country except for Israel, Afghanistan, Pakistan, and Iraq.

The exact amount varies from year to year and there are many different funding streams, but US foreign assistance to Egypt has averaged about $2 billion a year since 1979, when Egypt struck a peace treaty with Israel. Most of that goes toward military aid. President Obama’s 2014 budget tentatively includes $1.55 billion in aid, about the same amount the US has sent in recent years.

Has any of the aid been cut off?

Actually, yes, but only economic aid, and only some of that. State Department has put a hold on some programs financed by the $250 million in annual economic aid to Egypt, including training programs in the US for Egyptian hospital administrators, teachers, and other government workers.

What about the military aid?

The administration delayed a scheduled delivery of four F-16 fighters to Egypt last month, and it is considering a similar delay for a shipment of Apache attack helicopters and repair kits for tanks. But the White House has not actually cut-off military aid, which has held steady at about $1.3 billion since 1987.  (Economic aid, meanwhile, has fallen by more than two-thirds since 1998.)

American officials say that military aid doesn’t just promote peace between Egypt and Israel, it also gives the US benefits such as “expedited processing” for US Navy warships when they pass through the Suez Canal. A 2009 US embassy cable released by WikiLeaks makes essentially the same point:

President Mubarak and military leaders view our military assistance program as the cornerstone of our mil-mil relationship and consider the USD 1.3 billion in annual FMF as “untouchable compensation” for making and maintaining peace with Israel. The tangible benefits to our mil-mil relationship are clear: Egypt remains at peace with Israel, and the U.S. military enjoys priority access to the Suez Canal and Egyptian airspace.

According to the State Department, the military aid has included tanks, armored personnel carriers, antiaircraft missile batteries, and surveillance aircraft in addition to the F-16 fighters and Apache attack helicopters. In the past, the Egyptian government has bought some of the weapons on credit.

How important is the aid to Egypt?

Pretty important. Saudi Arabia, which along with other Persian Gulf countries pledged $12 billion in aid to Egypt after the coup, promised this week to make up the difference in any aid cut by the US or other Western nations. But much of the aid can’t easily be replaced, in particular fancy US weapons and replacements parts for them.

Does the aid require Egypt to meet any specific conditions regarding human rights?

Not really. When an exiled Egyptian dissident called on the US to attach conditions to aid to Egypt in 2008, Francis J. Ricciardone Jr., who had recently stepped down as the US ambassador to Egypt, told the Washington Post the idea was “admirable but not realistic.” And then-Defense Secretary Robert Gates said in 2009 that military aid “should be without conditions” at a Cairo press conference.

Sen. Patrick Leahy, a Vermont Democrat, led Congress in adding language to a spending bill in 2011 to make aid to Egypt conditional on the secretary of state certifying that Egypt is supporting human rights and being a good neighbor. The language requires that Egypt abide by the 1979 peace treaty with Israel, support “the transition to civilian government including holding free and fair elections,” and put in place policies to protect freedom of expression, association, and religion, and due process of law.” It sounds pretty tough, but it’s not.

Has American aid to Egypt ever been cut off?

No. Congress threatened to block aid last year when Egypt began a crackdown on a number of American pro-democracy groups. A senior Obama administration official said that then-Secretary of State Hillary Rodham Clinton had no way to certify the conditions set out in the spending bill were being met.

But Clinton waived the certification requirement (yes, the secretary of state can do that) and approved the aid, despite concerns about Egypt’s human rights record. The reason? “A delay or cut in $1.3 billion in military aid to Egypt risked breaking existing contracts with American arms manufacturers that could have shut down production lines in the middle of President Obama’s re-election campaign,” the New York Times reported. Breaking the contracts could have left the Pentagon on the hook for $2 billion.

Doesn’t the US have to cut off foreign aid after a coup?

The Foreign Assistance Act mandates that the US cut aid to any country “whose duly elected head of government is deposed by military coup or decree.” But last month the White House decided that it was not legally required to decide whether Morsi, who was democratically elected last year, was the victim of a coup — which allowed the aid to keep flowing. “We will not say it was a coup, we will not say it was not a coup, we will just not say,” an anonymous senior official told the New York Times.

As the Washington Post’s Max Fisher points out, Obama and his predecessors have dealt this kind of thing before. The president cut some aid to Honduras after a coup in 2009 and to Mali and the Central African Republic after coups there in 2012, but not all of it. And those countries aren’t nearly as important to US foreign policy as Egypt. President Bill Clinton cut some aid to Pakistan after a coup there in 1999, but President George W. Bush reinstated all of it after the Sept. 11, 2001, attacks.

Obama’s refusal to call it a coup infuriated Morsi supporters. “What is a coup?” Wael Haddara, a senior adviser to Morsi, told the New York Times. “We’re going to get into some really Orwellian stuff here.”

What about economic aid and efforts to promote democracy?

The various economic aid efforts have had mixed results. The State Department has described the Commodity Import Program, which gave Egypt millions of dollars between 1986 and 2008 to import American goods, as “one of the largest and most popular USAID programs.” But an audit of the four-year, $57 million effort to create agricultural jobs and boost rural incomes in 2007 found that the program “has not increased the number of jobs as planned.” And an audit of a $151 million program to modernize Egypt’s real estate finance market in 2009 found that, while the market had improved since the program began, the growth was “not clearly measureable or attributable” to the aid efforts.

The US has also funded programs to promote democracy and good government in Egypt—again with few results. It has sent about $24 million a year between 1999 and 2009 to a variety of NGOs in the country. According to a 2009 inspector general’s audit, the efforts didn’t add much due to “a lack of support” from the Egyptian government, which “suspended the activities of many U.S. NGOs because Egyptian officials thought these organizations were too aggressive.”

A recent audit of the European Union’s €1 billion—about $1.35 billion—aid program found that it had been “well-intentioned but ineffective” in promoting good governance and human rights. And a WikiLeaks cable revealed the Egyptian government had asked USAID in 2008 to stop financing NGOs that weren’t properly registered.