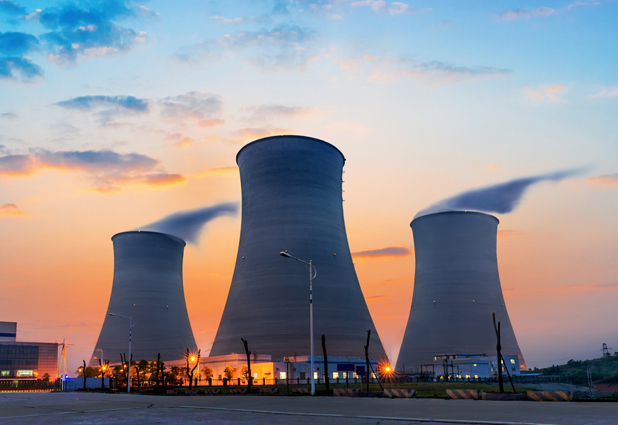 America’s fleet of nuclear power plants might be on the cusp of an industry crisis, according to an investigation by Inside Climate News and a recent report from Vermont Law School’s Institute for Energy and the Environment. The industry has been plagued by a streak of plant closures, which come as regulations, expensive upgrades, and newly cheap natural gas have made nuclear increasingly uncompetitive in the energy market. Plants in Vermont, Wisconsin, California, and Florida—the first plants to close in 15 years—have announced this year that they’re shutting down. And more are on the chopping block. According to the report, the industry might shrink in the coming decades, sinking hopes of America being at the start of “nuclear renaissance.”

Six years ago, amidst tax credits and nuclear-friendly regulation, a flood of proposed nuclear projects appeared to be the end of the drought that followed the 1979 accident at Pennsylvania’s Three Mile Island plant, when a partial meltdown stoked fears of a nuclear disaster and halted all new uranium power plant construction. But today, plans for more than half of the 28 new reactors that were proposed have been put on hold or canceled, and those that have gone ahead have suffered from delays and heaping budget overruns. Sixty-two percent of US plants have been operating for more than 30 years—and 20 percent for more than 40 years (the limit of their projected lifespan when they were built). And utility companies are becoming more reticent to pay for their expensive upgrades now that the natural gas boom has created a glut of cheap power.

The newly announced closures are just part of the grim picture the nuclear industry is facing. A 2012 court ruling blocked new permits from being issued until the Nuclear Regulatory Commission can assess the risks of storing spent fuel at plant sites, and at least five projects that would boosted the output of existing plants have already been canceled this year. The projects that are continuing in Georgia, South Carolina, and Tennessee are beleaguered by delays and cost overruns.

The report from Vermont Law School’s Mark Cooper, a senior fellow at the school’s Institute for Energy and Environment, paints an even more dire picture. “With little chance that the cost of new reactors will become competitive with low carbon alternatives in the time frame relevant for old reactor retirement decisions,” the report intones, “attention will shift to the economics of keeping old reactors online, increasing their capacity and/or extending their lives.” Of the 99 operating nuclear plants, the report says, “in terms of basic economics, there are three dozen reactors that are on the razor’s edge.” 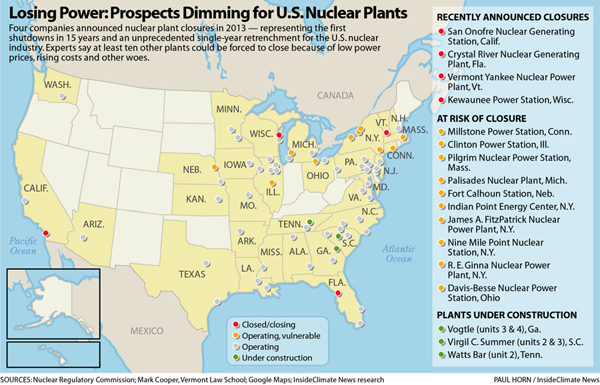 The culprit for nuclear’s shrinking margins is the glut of cheap natural gas. When the nuclear renaissance was being prophesied in the mid 2000s, natural gas prices were more than four times what they are today. In this more competitive climate, David Lochbaum, director of the nuclear safety project at the Union of Concerned Scientists, told Inside Climate News, “you’re basically one surprise away—one component [problem] away—from not having the economics favor you.” Another major burden facing the industry, the question of what to do with reactor waste, and how to pay for it, is being argued by the Department of Energy Wednesday morning, defending a fee it imposed for a future nuclear waste repository.

According to Inside Climate News, “the U.S. industry has weathered tough times before. A similar combination of economic stresses led to the closure of ten reactors in the mid-to-late 1990s, prompting the Department of Energy to predict that 50 reactors would be mothballed between 1995 and 2015.” Despite the dire forecast, only 15 reactors were decommissioned since 1995.

There is light on the horizon, however, for a new generation of nuclear plants that could run on the spent fuel from the current fleet (which surely beats sprinkling it from airplanes). According to a story in Wednesday’s New York Times, Bill Gates has made this new breed of nuclear reactors a pet project. Terra Power, which is led by Gates and former Microsoft Chief Technology Officer Nathan Myhrvold, is shooting to build “a new kind of nuclear reactor that would be fueled by today’s nuclear waste, supply all the electricity in the United States for the next 800 years and, possibly, cut the risk of nuclear weapons proliferation around the world,” according to the Times. It’s courting China as a lead partner for the $5 billion prototype project.