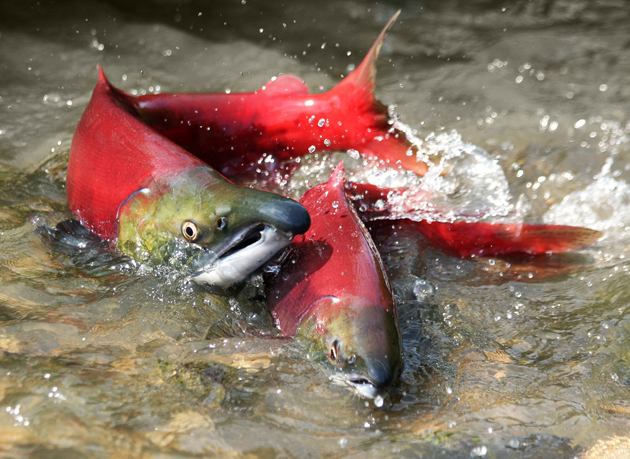 Supporters of Alaska’s proposed Pebble Mine—an open-pit copper and gold mine said to contain hundreds of billions of dollars in resources but also the potential to wipe out an entire region’s way of life—took a major blow Monday when one of the main companies behind the project pulled out. Anglo American, one of the world’s largest mining companies, said it would rather focus on other projects in its stable.

The Pebble Mine would be the largest of its kind in North America. Former Mother Jones staff writer Kate Sheppard put it into perspective in May: “[The mine] would be as much as two miles long, a mile and a half wide, and 1,700 feet deep … [sitting] at the headwaters of the Nushagak and Kvichak rivers, which feed into the Bristol Bay, producing as much as 11 billion tons of toxic mine waste over a span of decades.”

“Despite our belief that Pebble is a deposit of rare magnitude and quality, we have taken the decision to withdraw,” said Mark Cutifani, Anglo’s CEO. “Our focus has been to prioritise (sic) capital to projects with the highest value and lowest risks within our portfolio, and reduce the capital required to sustain such projects.”

In other words, Anglo would rather focus on projects that might actually move forward. After sinking $541 million into the project, the company likely took a cold look at the significant regulatory hurdles and political opposition. Joel Reynolds, the director of the Natural Resources Defense Council’s Marine Mammal Protection and Southern California Ecosystem projects, made the case in May 2012 that the Pebble Mine would have a hard time overcoming its negative baggage and was ultimately a bad investment in every way. “The Pebble Mine makes no sense environmentally, economically, culturally, or legally, and it ought to be abandoned,” he wrote.

The mine’s only remaining funder is Northern Dynasty, an organization created in 2001 to conceptualize and develop the massive project. Northern Dynasty CEO Ron Thiessen said that the company has the “expertise and resources necessary to advance” the project, but that advancement likely would only carry it to finding another deep-pocketed partner.