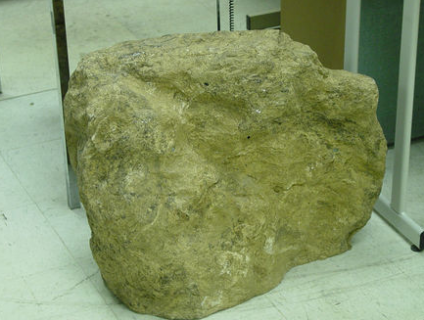 Most people check out eBay for vintage shoes, collectable Lord of the Rings swords, and limited edition Bruce Springsteen posters. But last week, eBayers had the opportunity to bid on national security surveillance equipment, intended to be disguised in a fake rock (rock not included, although you can get one at Home Depot). The technology was allegedly accredited by the Department of Defense and developed for Lockheed Martin in the early 2000s. But Lockheed never bought the commissioned project. So Gregory Perry, a former subcontractor who has done cybersecurity work for the Executive Office for United States Attorneys (EOUSA), advertised that for a starting bid of $3 million—or a “buy it now” price of $10 million—you could get hundreds of pages of development instructions, two years of email backups with Lockheed, and some hardware, including a specialized radio. All of this would supposedly equip you to build your own “RockCam,” intended to be used to take encrypted video and audio of US critical infrastructure, like nuclear power plants and oil and gas pipelines.

Welcome to the bizarre world of fake-rock subcontracting.

“Selling this collection of information is an attempt at recouping all or a portion of my investment of time, effort, personal monies, and sweat equity,” Perry tells Mother Jones. Perry, who has 100 percent positive buyer’s feedback on eBay, received dozens of bids when he first put the item up weeks ago. He took it down because he felt his story had received adequate exposure—and none of the bids were anywhere close to his original $10 million asking price. But he relisted the auction last week with a minimum bid because he “might have a serious buyer at this juncture.” As of publication, Perry had ended the auction on Sunday with zero bids, which is also the case with the $1,795 3-D printer that Perry was selling.

In the late ’90s, Perry worked for NETSEC Inc, a contractor that installed firewalls and did intrusion detection for EOUSA. (His employment by NETSEC was confirmed to Mother Jones by Zal Azmi, former chief information officer for EOUSA and the FBI.) Then, in 2002, Perry was hired by a subcontractor called Advanced Wireless Automation (AWA), where he owned a 10 percent founder’s share of the company. The subcontractor’s shining product was the RockCam, which is either a video camera with a lot of batteries or a high-tech piece of surveillance equipment, depending on who you ask. Perry says that RockCams—which on the outside, look like rocks—contain devices capable of sending encrypted information via 900 MHz radio to a main communication hub. According to the eBay listing, each high-resolution image and video is tagged with geographic coordinates, and the rock also contains environmental hardware, “such as temperature and humidity sensors for sampling weather-related data from the area.” The batteries last for three years. Here is a picture of the technology: 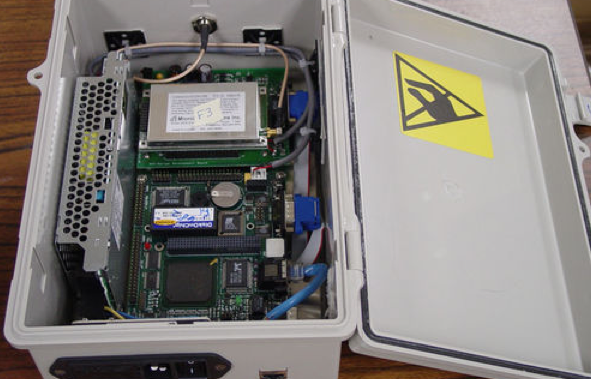 Perry says that Lockheed agreed to pay between $250,000-$500,000 for the final version of the device. (A Lockheed financial statement Perry sent Mother Jones shows that Lockheed was billed $4,000 for each public key encryption system, which doesn’t include the rest of the hardware.) Perry says his $96,000 salary was funded by these purchases as well as the investors that put money into the company. But Perry claims that after the RockCam was certified by DoD, he was fired by his fellow AWA shareholders (none of whom contacted by Mother Jones would comment) and the company dissolved because Lockheed did not pick up the product. Then, a couple years later, “spy rock” arrived:

Last year, Jonathan Powell, former chief of staff to Tony Blair, admitted that MI6, the British secret service, had used a spy rock, planted in a park in Moscow, to communicate with secret agents there in 2006. Powell called the security breach “embarrassing.” After the rock was discovered, Russian leader Vladimir Putin then ordered a crackdown on foreign-funded NGOs, accusing them of destabilizing the country.

Perry claims that spy rock borrows technology he developed with RockCam—and as a result, he wants compensation for his 10 percent shareholder’s claim. However, there’s no evidence that Lockheed made the famous spy rock (MI6 does not answer press questions). According to Wired, it’s not entirely outside the realm of possibility that Lockheed is in the fake surveillance rock business, as it’s leaving small wireless sensors—disguised as rocks—across the Afghan countryside, in order to perform “unobtrusive, continuous surveillance” for decades. But one technology expert told Mother Jones that RockCam is a glorified camera, and spy rock acts as a mailbox for uploading wireless files, so the only thing they have in common is the fake rock (Perry argues that his design has “wireless networking capabilities”).

Melissa Dalton, a spokesperson for the Lockheed Martin Aeronautics Skunkworks Group, would not comment on the eBay sale nor documents Perry sent Mother Jones allegedly showing his relationship with the company. Mark Wright, a spokesman for the Department of Defense, says that on cursory investigation, “We couldn’t find any knowledge of DOD involvement with this project.” However, after sending additional requested information about the project, another DOD spokesperson said that “we’re researching it” but did not respond by deadline.

Wayne Mitzen—a technology developer with several patents who worked with Perry at NETSEC and currently makes sex toys—says that this eBay listing isn’t actually that unusual. “One of my clients, who invented wireless microphone technology, mentioned his stuff’s ended up on eBay, too. It happens,” he says. “It’s the Snowden effect. Everybody thinks they’re Snowden, you know?”*

*Update: Mitzen contacted Mother Jones to clarify that he did not liken this particular eBay listing to Snowden.