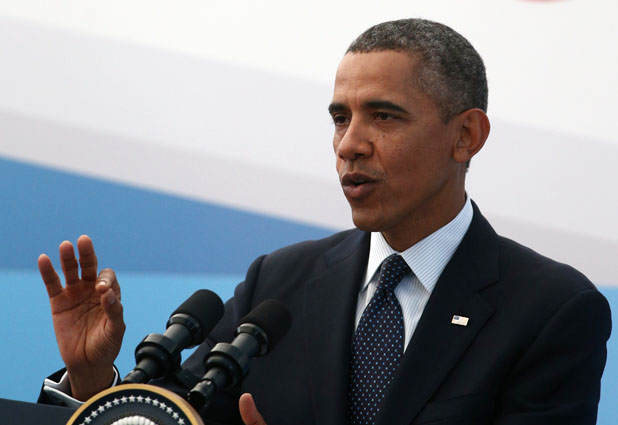 Here’s why President Barack Obama is in a jam: He cannot obtain support for a military strike against Syria within Congress and the public at large by simply saying “trust me,” and he cannot (at least with the public) provide a full explanation of the costs and benefits of this military action.

On Tuesday night, Obama will deliver an Oval Office speech to try to sway the American public to support the assault (unless somehow the Russia-brokered deal to place Syria’s chemical weapons under international control comes together), and he and his aides keep emphasizing that the attack will be limited, narrow, and tailored—”unbelievably small,” as Secretary of State John Kerry put it. But the task at hand remains a difficult one. The strike would have to achieve a very particular aim (punishing Bashar al-Assad and deterring his regime from the further use of chemical weapons) without yielding a variety of negative consequences, including causing excessive civilian casualties, changing the balance of power on the ground to the benefit of opposition forces aligned with Al Qaeda, triggering counterattacks against US or Israeli targets, and/or prompting more chaos and conflict in Syria and the region. And for a war-weary public, it is not easy to sort out the odds of success and failure without access to the best information the administration possesses.

How can one judge before the launch that this attack has a good shot of achieving the stated goals? Much will depend on the details of the military action. Can Assad’s chemical weapons infrastructure be effectively harmed by a dozen or more cruise missile strikes? Is it too spread out or blended into civilian areas? Is there a target list that a reasonable person would look at and say, “Yeah, if you hit each of these, the regime would really have a tough time pulling off another chemical weapon attack”? Could you conclude that an assault on these specific targets would impose such a high cost on Assad that he would holster his chemical weapons? Is there any intelligence—say intercepts from regime military commanders—suggesting a strike would create a serious disincentive for further use of chemical weapons?

“I can’t get into the details of the plan,” deputy national security adviser Antony Blinken said at the White House daily briefing on Monday. That’s understandable; Obama cannot telegraph exactly what he intends to hit with this restrained assault. (In the Iraq War, the general plan was obvious: full-scale invasion.) But here’s the rub: Without knowing specifics, it is impossible to evaluate fully the potential efficacy of a military assault. “That’s why we have elected representatives,” Blinken noted, meaning that the White House is sharing its intelligence and military blueprints in the classified briefings it has been offering members of Congress.

With this information and intelligence, lawmakers can presumably judge, for example, whether these strikes are likely to result in a high number of civilian deaths or not. But with little popular faith in the House and Senate these days—in this era of hyperpartisan politicization—it is increasingly unlikely that voters will believe lawmakers who vouch for the plan, especially when the public is not keen on another war and when one lesson of the Bush-Cheney years is that it’s easy for a White House bent on military action to bamboozle legislators. A large number of Americans who take their cues from Obama-hating pols, pundits, and commentators will be immune to persuasion, even if some Republican legislators declare the president has a decent plan that can be reasonably expected to work and that the available intelligence indicates a strike will pay off. As for skeptical Democrats, who would prefer to support the president but are moved by their long-standing anti-war inclinations, many of these people, though they tend to trust Obama, will not be convinced by mere assertions and reassurances uttered by the president or Democratic legislators who have been briefed on the military plans.

A similar dynamic applies to all those questions about possible negative consequences. Will Al Qaeda-related forces exploit a US attack and score ground gains? Will Iran and Hezbollah respond by expanding the war in the region? Will Assad slip the regime’s remaining chemical or biological weapons stockpiles to others, if he is attacked? Will his regime collapse and create an opening for Islamic extremists—and a WMD free-for-all? Will an attack lead to even greater Russian investment in Assad? It’s possible that Obama possesses intelligence that provides whole or partial answers to such worrisome questions. Perhaps the NSA—remember the NSA?—has captured the conversations of Assad, his military leadership, and other players in the region that allows Obama to conclude that a strike will not prompt Tehran to intensify its role in the Syrian conflict or sponsor more violence elsewhere. The president might possess intelligence that affords him more confidence than a tough-minded skeptic can muster. Yet he cannot share such information with the public.

The administration is supposedly providing this sort of intelligence to elected representatives. But if the White House can persuade these political creatures that it does have sound intelligence indicating a strike could achieve the stated goal and won’t produce unintended consequences that worsen the overall situation, many House and Senate members might still be reluctant to make this case to a public that is mostly opposed to a strike. And some legislators simply wouldn’t want to do anything to help Obama. Those lawmakers who publicly maintain the military plan is sound and the intelligence encouraging would still have to resort to this basic and unsatisfying argument: Trust me.

Presidents often ask the public to trust them in matters of national security, and usually they receive the benefit of the doubt—even when they shouldn’t. But when the public mood is one of profound skepticism, the president is handicapped. He may know a lot more than the rest of us. Then again, he may not. In this case, Obama cannot answer all the important queries about this potential strike—which is a nuanced mission involving a variety of complex calculations—and, thus, he may not be able to put forward his best case. That makes his sales job so much tougher, for these days faith isn’t trading too high in the political market.