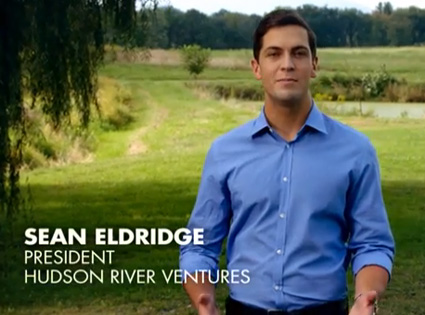 When I first met Sean Eldridge last summer, at a Ritz-Carlton lobby bar that doubled as a see-and-be-seen salon for Democratic bigwigs attending the party’s national convention in Charlotte, he seemed to fit in just fine. Eldridge, who runs a small investment fund in New York State’s Hudson River Valley, met with me to discuss his latest effort, a political group called Protect Our Democracy that planned to spend hundreds of thousands of dollars to support replacing the state’s lax campaign finance system with publicly funded elections. It was clear, though, that Eldridge had far loftier political aspirations than campaign finance activist.

On Monday, Eldridge finally unveiled his candidacy for New York’s 19th Congressional district. I say “finally” because it’s been an open secret for months now that Eldridge, who is married to Facebook cofounder and New Republic owner Chris Hughes, wanted to run for Congress. In a July 10 story titled “Young, Rich, and Relocating Yet Again in Hunt for Political Office,” the New York Times told of how Eldridge and Hughes had first bought a house in the city of Garrison, an hour north of New York City, but when it became clear Eldridge had little chance of winning in that congressional district, the couple purchased a $2 million home further north in Ulster County.

The 19th congressional district voted for Barack Obama by six percentage points in last year’s election. Rep. Chris Gibson, a two-term Republican and a 24-year Army veteran, currently represents the district. Gibson declined to comment for the Times‘ July story about Eldridge’s political aspirations, except to say: “There are some things money can’t buy.”

Eldridge will not lack for campaign cash. Hughes, Eldridge’s husband, pocketed upwards of $500 million from his time at Facebook, and even before he announced his candidacy, the donors to Eldridge’s exploratory committee included liberal financier George Soros and Napster founder Sean Parker.

Despite Eldridge having zero experience in elected office, he’s pretty savvy about money and its role in politics. Here’s an excerpt of my profile of Eldridge from the November/December 2012 issue of Mother Jones magazine:

Eldridge backed into New York’s political money wars. In 2009, he dropped out of Columbia Law School the day after the state Senate defeated a same-sex marriage bill. He joined Freedom to Marry, a national organization backed by gay philanthropist Tim Gill, which helped oust three unfriendly New York lawmakers and whose pressure on Albany proved crucial in passing same-sex marriage on the second try in 2011. Freedom to Marry and other outside groups also rallied the public behind the cause, creating a groundswell that helped lift the bill to passage.

While in the trenches of the marriage equality fight, Eldridge had an epiphany: Money influences every policy fight, large and small. Control the spigot of campaign cash and you can get the policies you want. “Voters will list the 10 issues they care about most, and none of them is campaign finance,” he told me. “But what I realized is that campaign finance underpins every one of those issues.”

In June, Eldridge took a cue from the marriage equality fight by launching Protect Our Democracy, a PAC/nonprofit focused on promoting the issue of political money reform. Protect Our Democracy’s main goal: introducing publicly financed matching campaign contributions to New York state. It plans on working with a coalition of progressive groups to replicate New York City’s practice of matching every dollar given by small campaign donors (up to $175 each) with $6 in taxpayer money. By supersizing small-dollar gifts, the thinking goes, candidates will listen to ordinary supporters more than corporations, unions, lobbyists, and trade groups. Such a plan would also encourage candidates who aren’t wealthy or well connected. According to an analysis by the Campaign Finance Institute, New York City’s system works as intended: The number of small donors to competitive candidates has spiked by 29 percent, and the overall share of small donations (not including public matching funds) has jumped 26 percent.

The annual cost to taxpayers for a statewide version of this public financing system, Eldridge says, would be negligible—$3 or $4 per New Yorker. That’s central to his pitch: For the cost of a latte, citizens can curb big-money politics.

New York could use the overhaul, critics say. Between 1976 and 2010, more public officials in the Empire State were convicted for corruption than anywhere else in the United States, according to researchers at the University of Illinois-Chicago. Reformers blame this rampant sleaze on the state’s lax campaign laws: Individuals can give candidates up to $150,000; corporations and their subsidiaries can give up to $5,000. The State Integrity Investigation project recently gave New York a D- for campaign finance on its Corruption Risk Report Card. Albany, for many New Yorkers, is shorthand for dysfunction and graft.