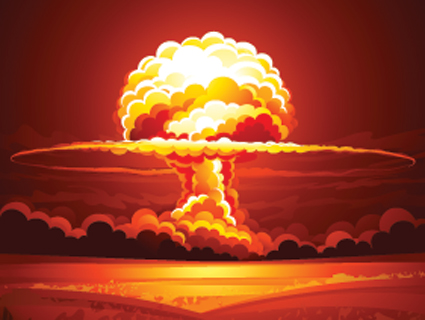 In early 2012, best-selling novelist Joel Rosenberg came to Capitol Hill for a meeting with an unidentified member of Congress to discuss the end of the world. “I thought the topic was going to be the possible coming war between Israel and Iran,” Rosenberg explained on his website. “Instead, the official asked, ‘What are your thoughts on Isaiah 17?'”

For the better part of an hour, Rosenberg says, the writer and the congressman went back forth on something called the “burden of Damascus,” an Old Testament prophecy that posits that a war in the Middle East will leave Syria’s capital city in ruins—and bring the world one step closer to Armageddon. As Rosenberg put it, “The innocent blood shed by the Assad regime is reprehensible and heart-breaking and is setting the stage for a terrible judgment.”

But Rosenberg and his anonymous congressman aren’t alone in viewing Syrian president Bashar al-Assad’s actions through a biblical lens. With Congress set to vote next week on the authorization to use military force in Syria, the Damascus prophecy has taken on a new significance among the nation’s End Times industry—writers and pastors who believe the world is hurtling toward the return of Christ as forecasted in the Book of Revelation—and its adherents in the pews and in public life. On Saturday, Rosenberg will travel to Topeka, Kansas, at the invitation of Republican Gov. Sam Brownback, to discuss the situation in the Middle East.

The idea behind the prophecy is a fairly straightforward one. In Isaiah 17, the prophet explains that, in the run-up to Armageddon, “Damascus is about to be removed from being a city, and will become a fallen ruin.” The implication is that it will be leveled by God on behalf of Israel as part of the last great struggle for mankind.

How exactly that will happen is a bit less clear. “The honest answer is that the Bible does not say,” Rosenberg wrote on his blog last June. But in Rosenberg’s Twelfth Imam series, he postulates that the emergence of the Mahdi, the Muslim messiah, leads to the rise of a new Islamic caliphate in the Middle East that prepares to decapitate Israel by launching nuclear warheads from Damascus. As the top-rated Amazon review for the final book in the series, Damascus Countdown puts it, “This is a great read for anyone interested not only in the prophetical future of Israel but for Iran and Syria as well…[It] makes one want to keep his or her eyes wide open on current day Middle East events, and see if they line up to eschatological Old Testament passages.”

Rosenberg may seem like a fringe figure, but he has a large base of support and friends in high places. Damascus Countdown was, like the two preceding books in the series, Twelfth Imam and Tehran Initiative, a New York Times bestseller. He has been cited as an expert on nuclear policy by Fox News, where host Shannon Bream noted that he had been referred to as a “modern-day Nostradamus.” Former (and future) Republican presidential candidate Rick Santorum wrote a blurb for the hardcover edition of Damascus Countdown and brought the author onto his radio show, Patriot Voices, to discuss the book last spring.

In March, Rosenberg met privately with Texas Gov. Rick Perry and Rep. Louie Gohmert in Austin. Gohmert was such a big fan of the novelist he brought a copy of Damascus Countdown as a gift to Israeli prime minister Benjamin Netanyahu in 2011. (Because he’s Louie Gohmert, the Texas congressman knocked over Netanyahu’s coffee cup and bottled water in the process of handing over the book.) In April, he discussed Damascus Countdown at the Heritage Foundation, a leading conservative think tank. Rosenberg did not respond to a request to comment from Mother Jones.

Rosenberg is not the only Christian thinker making a buck off the burden of Damascus. Jan Markell, on whose End Times radio program Rep. Michele Bachmann (R-Minn.) has frequently appeared, blasted out an email to followers last summer warning that the Burden of Damascus may be close at hand. She reiterated that position in an interview with OneNewsNow last week. Walid Shoebat, a self-described “ex-terrorist” who is a frequent guest at right-wing confabs, told birther news site WorldNetDaily in August that while he wasn’t sure the Burden of Damascus was imminent, “We can sense the beginning signs for the fulfillment of Isaiah 17’s destruction of Damascus when we witness the influx of refugees from Syria to Jordan as predicted by the prophet Amos.”

Hal Lindsey, a Texas-based evangelist famous for his 1970 treatise, The Late Great Planet Earth, has been beating the Damascus drum for years. He addressed the subject head-on in a 2008 column at WorldNetDaily (where Santorum is also a columnist), inspired by fears that then-President-elect Obama might bring the world closer to a war between Israel and Iran.

As Lindsey explained, the prophesied ruination of Damascus did not mean the end for everyone else—it would just bring the world one step closer to the final confrontation. “[A]ccording to Bible prophecy, Iran survives the Israeli strike and plays a major role in the coming Russian-led Gog-Magog Alliance foretold by the Prophet Ezekiel,” he wrote. “Israel also survives, since the Gog-Magog Alliance eventually marches against it.”

After warning once more of the “burden of Damascus” throughout the spring and early Summer, Lindsey offered a more dire warning on his television program on Friday, the day before Obama announced he was taking his case to Congress.

“As I prepared for this weeks program, I was again struck by the speed with which events are moving into the scenario the prophets predicted for the end times,” he told his audience. “I believe we’re there. People on the street are talking about what all of these things mean. Folks that wouldn’t go darken the door of a church or pick up a Bible are now very curious. This may be our greatest opportunity—maybe even our last opportunity—to share the gospel of Jesus Christ before we’re silenced by political correctness.”