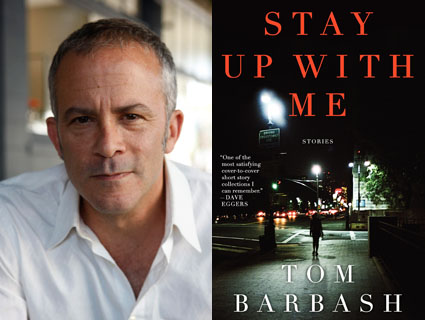 “If this was only the start of the darkest part of his life, Timkin marveled at what he’d already been able to make of it.”

Thus concludes Balloon Night, one of the sad yet joyous stories in Stay Up With Me, a new collection out this week from Tom Barbash, former small town reporter turned fiction writer.

Timkin, the protagonist of Balloon Night, faces an onslaught of holiday revelers streaming into his Manhattan apartment for the Thanksgiving blowout party he hosts with his wife every year. Except she left him for good two days ago, with no way to cancel the festivities on such short notice. So he endeavors to drown her absence in booze and friends until, at the climax of the night, the desperate realization that she isn’t coming back sets in with an inexplicable wave of euphoria. “To Amy!” he calls out, toasting the poignancy of his pain.

The characters that populate Barbash’s stories are all hurting—some of them quite badly. But it doesn’t diminish their capacity for wonder. They collide with life, losing siblings and spouses, parents and children. They suffer bad stepfathers and endure the exploits of their sexually active offspring. The magic of the stories comes in the small, transcendent moments when the world crushing in doesn’t seem so bad.

Barbash has published two books previously: the award-winning novel The Last Good Chance, based on the years he spent reporting in upstate New York, and the New York Times bestseller On Top of the World: Cantor Fitzgerald, Howard Lutnick, and 9/11, a nonfiction account of the revival of the financial services firm after it lost nearly seven hundred employees in the Twin Towers. He teaches in the MFA program at California College of the Arts and lives in Marin County, Calif.

I caught up with Barbash to ask about class, clueless New Yorkers, and JD Salinger’s lost works.

Mother Jones: How did your experience working as a reporter after college inform your writing?

Tom Barbash: I worked for a few years at the Syracuse Post Standard. I tell my students that it’s the best thing a young writer can do. It puts you outside yourself; it makes you listen better to others. I was on my own. I had to find stories. Going out and meeting people and trying to find out their stories has helped me all the way through my life as a writer.

MJ: Class issues come into your stories in subtle ways.

TB: I’m glad you said that.

MJ: The Sunday New York Times Book Review wrote of your book that some characters “are so rich they don’t know what money is,” but others are quite sensitive to class, like the reporter in your story “Paris,” and Randall in “Somebody’s Son.” Can you talk about how your own class sensibilities affect your stories?

“The idea of actually living in a small town on Lake Ontario seemed completely absurd to my New York City friends.”

TB: Good question. I grew up in an upper-middle class home in New York City, and then I went to upstate New York. So some of the writing I do is bringing those big-city eyes to a more rural and downtrodden area. I moved to a postindustrial town where things were on a downslide. So I’m aware of those things. My first novel is really about that idea of people who live in a place that they associate with defeat. But you have to be careful with that. The reporter in “Paris” makes the mistake of thinking that he’s shining a light in a very helpful way, and people feel marginalized and satirized and that’s not a good thing to do.

MJ: As you left the Manhattan lifestyle, did you find that your own sensibilities changed?

TB: Very much so. In fact, when I came back to New York, I found myself really irritated by some of the conversations people were having. I remember a woman said to me that she was really broad-minded because she had lived in Boston, DC, and New York. The idea of actually living in a small town on Lake Ontario seemed completely absurd to my New York City friends.

MJ: What are your feelings on the new Salinger books?

TB: I love Salinger… I’m really curious about the new books, what he wrote all those years. As a New York City kid growing up on the west side, so much of what Salinger wrote about were things that I had seen and done.

MJ: Are you mad at Salinger for squirreling away all those other stories?

TB: I can’t imagine what it must’ve been like. He must have had his reasons. There must have been something about his celebrity that drove him away from people. I haven’t had that problem yet.

Barbash will be on a bicoastal book tour promoting Stay Up With Me through October.