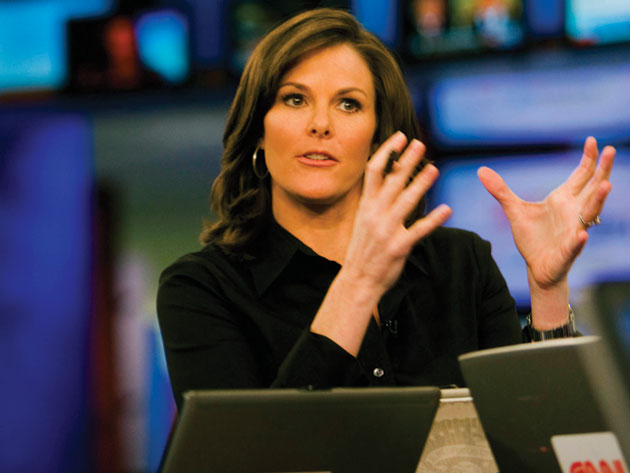 Early one morning in July, former CNN anchor Campbell Brown appeared on MSNBC’s Morning Joe, pen in hand, notes fanned out in front of her. Viewers might have mistaken her as a fill-in host, but Brown had swung by 30 Rock in her new role as a self-styled education reformer, a crusader against sexual deviants in New York City public schools and the backward unions and bureaucrats getting in the way of firing them. “In many cases, we have teachers who were found guilty of inappropriate touching, sexual banter with kids, who weren’t fired from their jobs, who were given very light sentences and sent back to the classroom,” Brown, the mother of two young sons, explained.

Brown was there to plug her new venture, the Parents’ Transparency Project, a nonprofit “watchdog group” that “favors no party, candidate, or incumbent.” Though its larger aim is to “bring transparency” to how contracts are negotiated with teachers’ unions, PTP’s most prominent campaign is to fix how New York City handles cases of sexual misconduct involving teachers and school employees—namely by giving the city’s schools chancellor, a political appointee, ultimate authority in the process.

Shortly after it was launched in June, PTP trained its sights on the New York mayoral race, asking the candidates to pledge to change the firing process for school employees accused of sexual misconduct. When several Democratic candidates declined, perhaps fearing they’d upset organized labor, PTP spent $100,000 on a television attack ad questioning whether six candidates, including Republican Joe Lhota and Democrats Bill de Blasio and Anthony Weiner, had “the guts to stand up to the teachers’ unions.” The spot stated that there had been 128 cases of sexual misconduct by school employees in the past five years, suggesting that nothing had been done in response. “It’s a scandal,” the ad’s narrator intoned. “And the candidates are silent.”

PTP spent $100,000 on an attack ad questioning whether candidates like Bill de Blasio and Joe Lhota had “the guts to stand up to the teachers’ unions.”

Before founding PTP, Brown raised this issue in a Wall Street Journal op-ed in July 2012. But what she failed to disclose was that her husband, Dan Senor, sits on the board of the New York affiliate of StudentsFirst, an education lobbying group founded by Michelle Rhee, the controversial former Washington, DC, chancellor. Rhee made a name for herself as public enemy No. 1 of the teachers’ unions and has become the torchbearer of the charter school movement. In 2012, her “bipartisan grassroots organization” backed 105 candidates in state races, 88 percent of them Republicans. (Senor was also the spokesman for the Coalition Provisional Authority following the invasion of Iraq and served as a foreign policy adviser to Mitt Romney in 2012.)

Writing in Slate, Brown, a veteran journalist, confessed to being naive about the standards for revealing a potential conflict of interest: “If you live in the overlapping world of politics and media, as I am learning, anything less than full transparency can potentially do you in.” She still managed to get in a few digs at the unions. “I failed to disclose,” she wrote, “because I stupidly did not connect the teachers’ unions’ opposition to charter schools to their support for a system that protects teachers who engage in sexual misconduct.”

But there is much more about PTP that is less than transparent, including its sources of funding and its overall agenda. As a 501(c)(4) nonprofit, PTP may keep its donors’ identities secret and spend money in electoral campaigns, so long as political activity doesn’t consume the majority of its time and money.

Brown failed to disclose that her husband sits on the board of the New York affiliate of Michelle Rhee’s education lobbying group.

Another consulting firm working with Brown’s group is Tusk Strategies, which helped launch Rhee’s StudentsFirst. Advertising disclosure forms filed by PTP list Tusk’s phone number, and a copy of PTP’s sexual-misconduct pledge—since scrubbed from its website—identified its author as a Tusk employee. (Tusk and Revolution declined to comment. Brown referred all questions to her PR firm—the same one used by StudentsFirst.)

What about Brown’s allegation that the New York schools did nothing about 128 cases of sexual misconduct? It turns out that in 33 of those cases, the employee in question had been fired, the New York Times reported. Many of the others were disciplined.

Brown’s group paints the unions as the main obstacles to a crackdown on predators. Yet Randi Weingarten, the president of the American Federation of Teachers, says that the union’s New York City chapter already has a zero-tolerance policy in its contract, and that AFT only protects its members against “false allegations.” New York state law also mandates that any teacher convicted of a sex crime be automatically fired. It is the law, not union contracts, that requires that an independent arbitrator hear and mete out punishment in cases of sexual misconduct that fall outside criminal law. The quickest route to changing that policy may be lobbying lawmakers in Albany, not hammering teachers and their unions.

Before Brown left CNN three years ago, her evening news show carried a memorable tagline: “No bias. No bull.” She can’t say the same for her foray into the education wars.