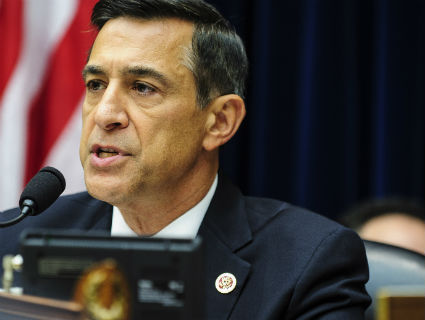 On Wednesday morning, House Speaker John Boehner (R-Ohio) ended his two-week standoff with the White House and Senate Democrats, agreeing to bring to a vote a Senate-brokered bill to raise the debt ceiling through February 7 and fund the federal government through January 15. But a light at the end of the tunnel of this latest Capitol Hill crisis didn’t mean an end to the GOP political theatrics. Even as House Republicans were capitulating on the demands that had precipitated this standoff, they were convening a hearing to get to the bottom of why the National Park Service had shuttered the memorials on the National Mall, hauling NPS director Jonathan Jarvis before the committees on oversight and natural resources in an effort to portray the closures as a politically motivated effort to turn up the heat on the GOP.

“I regret that [Jarvis] would not come voluntarily and had to be subpoenaed and served by a US Marshal,” said Rep. Darrell Issa (R-Calif.), sounding almost as if he meant it.

For 15 days, Republicans have tried to turn Jarvis into the villain of the shutdown by highlighting the closure of popular sites like the WWII memorial. He was the lead player in this right-wing conspiracy theory, in which Obama had supposedly forced parks and memorials to close to make the GOP-cased shutdown appear worse than it really was. On Saturday, hundreds of veterans demonstrated against the closure of this site on the National Mall, joined by Sen. Ted Cruz (R-Texas) and former Alaska Gov. Sarah Palin. At the time, conservatives hailed the protest as a game-changer in the public relations war. And apparently they still do.

At the hearing, Rep. Doc Hastings, chairman of the House Natural Resources Committee, alleged that the monument closures were indeed “an attempt to make the shutdown as painful and as visible as possible” and their reopening was “an attempt to squash the ensuing bad PR.”

Republican congressmen had a handy point of comparison for the closures on the National Mall: Occupy DC set up camp on the NPS-maintained McPherson Square for 100 days in 2011 without harassment from park police. “Do you consider it an exercise of your First Amendment right to walk to a monument that you helped build,” Rep. Trey Gowdy (R-S.C.) asked Jarvis, “or is it only just smoking pot at McPherson Square?”

Rep. John Mica (R-Fla.) seized on a quote, provided anonymously from a NPS ranger to a Washington Times columnist, that “we’ve been told to make life as difficult for the people as we can.” Over the last two weeks, conservatives have cited this as evidence the White House may have orchestrated the monument closures. Jarvis insisted that it was strictly an NPS decision. He denied any such order to make life difficult and said the quote—which after all appeared in a newspaper that regularly publishes Ted Nugent—was “hearsay.” “It may be hearsay,” Mica said, but he was sticking to it.

Midway through his opening remarks, Rep. Peter DeFazio (D-Ore.), the ranking Democrat on the House Natural Resources Committee, held up a small blue-edged hand mirror. “If those Republican colleagues will look at me, I will show you who’s responsible.” Rep. Markwayne Mullin (R-Okla.)—who recently called on the “four branches of government” to work together—stood up from his chair on the far side of his room and stared blankly in DeFazio’s direction, then sat down. Most of his colleagues kept their focus straight ahead.

House Republicans may have lost the shutdown war, but at least they still think they’re winning.