On September 30, Richard Portwood, a 27-year-old Georgetown University graduate student, received a phone call from an FBI agent who said the bureau wanted to meet with him urgently. Portwood didn’t know why the FBI would have any interest in him, but two days later he sat down with a pair of agents at a coffee shop near his apartment. They told him they suspected that Yury Zaytsev, the US director of a Russian government-run cultural exchange program that Portwood had participated in, was a spy.

Since 2001, Zaytsev’s organization, Rossotrudnichestvo, has footed the bill for about 130 young Americans—including political aides, nonprofit advocates, and business executives—to visit Russia. Along with Portwood, Mother Jones has spoken to two other Rossotrudnichestvo participants who were questioned by the FBI about Zaytsev, who also heads the Russian Cultural Center in Washington. 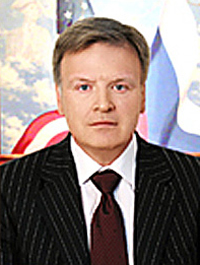 Yury Zaytsev, a Russian diplomat. Multiple sources tell us he is the subject of an extensive FBI investigation. Rossotrudnichestvo

The FBI agents “have been very up front about” their investigation into whether Zaytsev is a Russian intelligence agent, says a 24-year-old nonprofit worker whom the FBI has interviewed twice and who asked not to be identified. The FBI agents, according to this source, said, “We’re investigating Yury for spying activities. We just want to know what interactions you’ve had with him.” The nonprofit worker was shocked. Zaytsev, he says, is “what you imagine when you imagine a Russian diplomat. He’s fairly stoic, tall, pale.” Zaytsev did not travel on the exchange trips he helped arrange, and his contact with the Americans who went on these trips was limited.

The agents who interviewed the Rossotrudnichestvo participants did not tell them what evidence they possessed to support their suspicions. FBI spokeswoman Amy Thoreson declined to confirm or deny the existence of an investigation into Zaytsev or answer any questions about FBI actions regarding the Russian. (The FBI did not ask Mother Jones to withhold this story.) But based on what the bureau’s agents said during the interviews, the Americans who were questioned concluded the FBI suspects that Zaytsev and Rossotrudnichestvo have used the all-expenses-paid trips to Russia in an effort to cultivate young Americans as intelligence assets. (An asset could be someone who actually works with an intelligence service to gather information, or merely a contact who provides information, opinions, or gossip, not realizing it is being collected by an intelligence officer.) The nonprofit worker says the FBI agents told him that Zaytsev had identified him as a potential asset. Zaytsev or his associates, the agents said, had begun to build a file on the nonprofit worker and at least one other Rossotrudnichestvo participant who had been an adviser to an American governor.

Many countries—including the United States—place spies abroad under diplomatic cover, and it’s common for law enforcement agencies to keep a close eye on foreign diplomats who might be engaged in espionage. The Americans interviewed by the FBI say the agents did not indicate whether they believed Zaytsev had succeeded in developing Americans as assets.

The FBI appears to be mounting an extensive investigation of Zaytsev. The three Americans interviewed by the FBI say the agents told them the bureau is trying to interview every American who has attended these trips. The nonprofit worker says that FBI agents went so far as to contact a married couple, who are Rossotrudnichestvo alums, while they were vacationing in Japan. He says the agents told him they were also scouring flight manifests associated with Rossotrudnichestvo trips for names that showed up repeatedly and could be Zaytsev collaborators.

All three former participants describe their Rossotrudnichestvo experience as a typical cultural exchange program, albeit a ritzy one. The organization paid for meals, travel, lodging, and every other expense associated with the trip, down to the visa fee. During the St. Petersburg leg of a June 2012 trip, participants stayed at the Sokos Hotel Palace Bridge, a luxury hotel that has hosted delegations for the G8 and G20 summits. Participants on that trip met with the governors of Moscow and St. Petersburg and with Aleksander Torshin, a high-ranking member of Vladimir Putin’s United Russia party. Since 2011, Rossotrudnichestvo has organized six trips. Most included about 25 people, although roughly 50 visited Russia during the group’s first trip in December 2011.

The application process for this exchange program is simple. The application form calls for basic personal details—including the applicant’s place of work and job title—copies of the applicant’s passport, and a one-page letter “briefly outlining why you should be selected, why you are interested and what interests you have in collaboration with Russia.” Applicants tend to find the program through referrals. (Portwood has referred about 50 people to Rossotrudnichestvo. To his knowledge, Rossotrudnichestvo never denied any applicants.) The group also offers similar exchanges to young professionals in Asia, Latin America, Africa, and Europe.

When I called the Russian Cultural Center last week, Zaytsev answered. He declined to answer questions about the FBI’s investigation on the phone, but he eagerly invited me to visit him at the center two days later. “I welcome any questions you have for me,” he said. When I arrived, though, Galina Komissarova, a center employee, asked me to leave, saying I hadn’t sent questions in advance as Zaytsev had requested. (He hadn’t.) Komissarova would not disclose her title or role at the center. “I just clean,” she said sternly, showing me the door. I discovered later that Komissarova is Zaytsev’s wife.

Since then, Zaytsev has not replied to written questions or returned repeated phone calls.

A State Department spokeswoman confirms that Zaytsev is on a list of foreign mission staff who have diplomatic immunity. If it chose to, the United States could revoke his immunity, forcing Russia to call him home.

Portwood, who attended Rossotrudnichestvo trips in 2011 and 2012, and the other Americans questioned by the FBI were asked a similar set of questions. The agents wanted to know how they had heard about the exchange program and where in Russia they traveled. They also asked whether participants had encountered any anti-American sentiment on their trip, were offered jobs, or had suspicious interactions with Rossotrudnichestvo afterward. Portwood and the two other participants said they answered “no” to these questions.

According to three Rossotrudnichestvo alums, Zaytsev displayed no suspicious behavior and none developed an ongoing relationship with him after their excursion. For most Rossotrudnichestvo participants, they say, Zaytsev was merely the name on the congratulatory letter they received when they were accepted into the exchange program.

The third participant who spoke to Mother Jones about the exchange program, a 26-year-old resident of Washington, DC, is not surprised by the FBI’s allegations—and doesn’t care whether he was targeted as a possible intelligence asset. “There’s not a single American diplomat anywhere in the American sphere of influence who doesn’t have an open line of communication with the CIA. … [What Zaytsev is doing] is not something that every other single [foreign] cultural center in DC isn’t also doing,” he says. “And that doesn’t bother me. I don’t have a security clearance. I don’t work for an elected official. I run a social enterprise that has absolutely nothing to do with US-Russia relations.”

Rossotrudnichestvo’s most recent Russia trip was scheduled for mid-October and it’s unclear whether or not it went forward as planned. After he was questioned by the FBI, Portwood emailed people he had earlier referred to the organization to inform them of what he learned. His email read, in part: “The FBI disclosed to me that Yury Zaytsev is a Russian Foreign Intelligence officer and a professional spy, acting as the Director of the Russian Cultural Center in Washington, D.C.…only so that he can maintain a residence here in the United States. In fact, the FBI alleges that part of Mr. Zaytsev’s mission is sending young professionals from the United States to Russia as part of a cultural program wherein participants are evaluated and/or assessed for Russian counterintelligence purposes.”

Portwood was disappointed to learn the exchange program may have been a cover for Russian intelligence work. “It passed the smell test,” he says. “But I guess Russia’s Russia, you know?”

All such “scaring information” very much resembles Cold War era. A blunt tentative is made to distort and to blacken activities of the Russian Cultural Center in DC, which are aimed at developing mutual trust and cooperation between our peoples and countries. As a matter of fact, somebody intends to torpedo the guidelines of the Russian and U.S. Presidents, whose Joint Statement in Lough Erne emphasizes the importance of “expanding direct contracts between Americans and Russians that will serve to strengthen mutual understanding and trust and make it possible to raise U.S.-Russian relations to a qualitatively new level”.

Russian Cultural Center has been working to expand contacts and better understanding between Russian and American citizens and will continue this work.