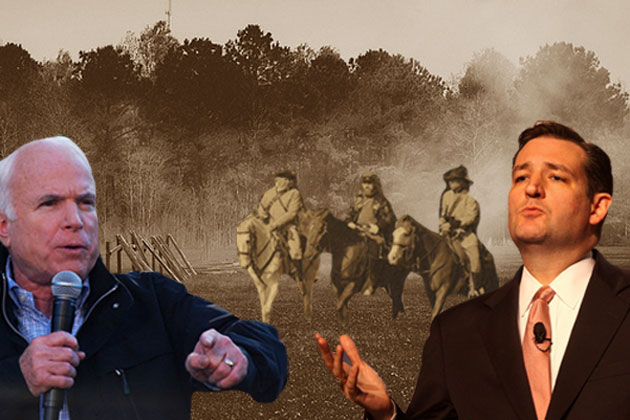 The just-concluded government shutdown and debt ceiling crisis revealed a deep and profound split within Republican ranks, as tea party crusaders pushed for brinkmanship to thwart Obamacare and establishment-minded GOPers freaked out over the historic hit their party was receiving in public opinion polls. Even after the conflict was settled (at least for a few months)—with the congressional Republicans essentially waving a white flag—the civil war within GOP and conservative circles continued unabated. Once the deal went down, mainstream GOPers immediately blamed the “suicide caucus” for harming the party and pledged to block future shenanigans of this sort, and tea partiers in and out of Congress dismissed the “surrender caucus” and vowed to continue the fight as the next D-Days approach (January 15 for funding the government, and February 7 for the debt ceiling).

This ugly episode hasn’t resolved the tensions within the GOP and the conservative movement—it has exacerbated them. Here is a list of post-deal quotes from key players in this civil war that show the internecine battle is not likely to end soon.

Sen. John McCain (R-Ariz.): “We’re not going to go through the shutdown again. People have been too traumatized by it. There’s too much damage…We’re not going to shut down the government again. I guarantee it.”

Sen. Lindsey Graham (R-S.C.): “For the party, this is a moment of self-evaluation, we are going to assess how we got here…If we continue down this path, we are really going to hurt the Republican Party long-term.”

Sen. Bob Corker (R-Tenn.): “On our side of the aisle, we’ve wasted two months focused on something that was never going to happen. I won’t say that I did, but a number of folks did. What we could have been doing all this time is focused on those mandatory changes that all of us know our country needs, and we’ve blown that opportunity. I hate to say it.”

Rep. Devin Nunes (R-Calif.): Called Republicans advocating for the shutdown “lemmings with suicide vests…They have to be more than just a lemming. Because jumping to your death is not enough.”

Rep. Charlie Dent (R-Penn.): On his long-held belief that the government shutdown wouldn’t work: “I was correct in my analysis, and I’d say a lot of those folks were not correct in theirs.”

Karl Rove: “Barack Obama set the trap. Some congressional Republicans walked into it. As a result, the president is stronger, the GOP is weaker, and Obamacare is marginally more popular. The battles over spending, taxes, and debt have not been resolved, only postponed. It’s time Republicans remembered that bad tactics produce bad outcomes.”

Gov. Chris Christie (R-N.J.): “All you need to do is look about 200 miles south of here to see the mess that Republicans and Democrats have made of our national government and we should haul all their rear-ends to Camden today to see how bipartisanship works and government works together.”

Sen. Orrin Hatch (R-Utah): “Heritage used to be the conservative organization helping Republicans and helping conservatives and helping us to be able to have the best intellectual conservative ideas…Right now, I think it’s in danger of losing its clout and its power around Washington, DC.”

Rep. Aaron Schock (R-Ill.): “The reality is there’s a much larger population within our caucus that recognizes reality for what it is.”

Rep. John Fleming (R-La.): Said that the agreement will “get us into Round 2. See, we’re going to start this all over again.”

Rep. Raul Labrador (R-Idaho): “I’m more upset with my Republican conference, to be honest with you…If anybody should be kicked out, it’s probably those Republicans—and not Speaker Boehner—who are unwilling to keep the promises they made to American people.”

Rep. Tim Huelskamp (R-Kans.): “I would say the surrender caucus is the whiner caucus, and all they do is whine about the battle, as if they thought being elected to Washington was going to be an easy job.”

Erick Erickson, editor in chief of RedState: “We must advance. Two Republicans in the Senate caused this fight that their colleagues would have surrendered on more quickly but for them. Imagine a Senate filled with more. We have an opportunity to replace Mitch McConnell in Kentucky with a better conservative. We should do that…as more Americans watch Obamacare fail them through the Republican primary season, conservatives will be able to put the focus on Republicans who funded Obamacare instead of fighting it. Whether they like it or not, Republicans in Congress will find their names on ballots in 2014. They cannot hide or escape fate.”

Rep. Michele Bachmann (R-Minn.): “Absolutely, I think [the shutdown and debt ceiling fight were] worth it! It’s been worth it because what we did is we fought the right fight.”

Sen. David Vitter (R-La.): “My No Obamacare Exemption for Washington language has been blocked out by Harry Reid, Barrack Obama and others who want to keep their special subsidy. But it’s not going away and neither am I.”

Americans for Prosperity: “Our activists are more engaged than ever in this fight, and we intend to hold politicians accountable for their promise to stop overspending.”

Michael Needham, Heritage Action for America president: “I admire what the House has done in the last couple weeks. It’s unfortunate that the Senate hasn’t been responsive to the American people…and really has undercut the House throughout the last two weeks.”

Rep. Joe Barton (R-Texas): Called the agreement “a bad deal,” and when asked whether Congress would be back in the same situation in a few months, he didn’t hesitate: “Yes.”

Sen. Mike Lee (R-Utah): “The media keeps asking, was it worth it? My answer is that it is always worth it to do the right thing. Fighting against an abusive government in defense of protecting our individual rights and freedoms is always the right thing…In Washington, victories are rarely immediate and very few are permanent. Obamacare wasn’t enacted overnight and it won’t be repealed overnight. We must remind the American people of the harmful effects of this law at every opportunity.”

Matt Kibbe, FreedomWorks president and CEO: “Republican leadership has completely lost its way. Not only is this proposal a full surrender—it’s a complete surrender with presents for the Democrats.”

The Tea Party Patriots: “The Senate deal is a complete sellout. Speaker Boehner and the House should stand firm and reject this deal to reign [sic] in the Executive branch’s power before it is too late…The House ‘Leadership’ must stop playing ‘flinch’ with themselves, and instead, play hardball with the White House, the Senate, and the House.”

Sen. Ted Cruz (R-Texas):  “The American people rose up and spoke with an overwhelming voice and at least at this stage Washington isn’t listening to them…But this battle will continue.”