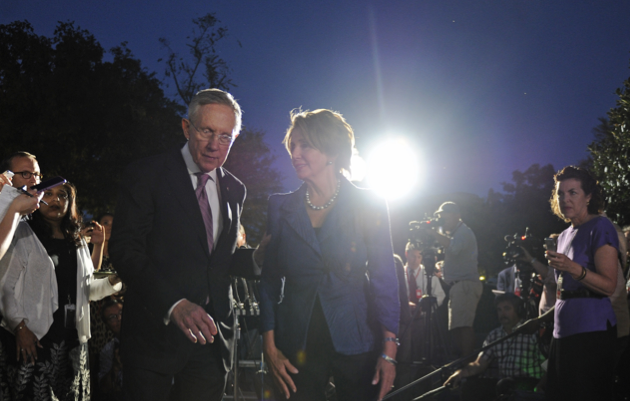 As the week of a possible government default began, talks aimed at ending the shutdown and the debt ceiling crisis revolved around a new wrinkle: the resistance of Senate Majority Leader Harry Reid and his fellow Senate Democrats to an agreement funding the government for a longer, rather than shorter, period of time. Say what?

Why is kicking the can down the road a couple of months a better option than staving off another government-spending showdown for a half year, as Republicans prefer? It’s because the Republican plan would lock in for even longer the $1.2 trillion in budget cuts known as sequestration, which went into effect in March and which Democrats really hate.

Democrats want to replace the economy-crimping sequester with a less austere plan that includes more targeted cuts and higher total spending levels. Reid is okay with extending current sequester-level spending—but only until mid-January, so a broader budget deal that includes Democratic priorities can be worked out before deeper spending cuts go into effect. If the House somehow forces a longer-term deal, it would be much harder for Reid and Democrats to negotiate a substitute for the sequester, say, six months from now because the fiscal year (which began October 1) would be half over. That would mean that the current deep budget cuts, which have already resulted in the loss of hundreds of thousands of jobs, would likely drag on and on.

Reid does not want a deal that un-shuts the government to prevent him from waging a fight over sequestration. In September, he says, he agreed to a temporary continuing resolution that would keep the US government open for two months at the spending levels dictated by sequestration, and considered that a concession to House Speaker John Boehner and the Republicans. He did so with the expectation that he could still try to undo some of the consequences of sequestration in the 2014 budget. And with the House Republicans now on the ropes in the dual shutdown/debt ceiling crisis, he has seen his leverage increase and has pushed for the chance to wage another battle over sequestration.

As my colleague Tim Murphy and I reported earlier this year, below are some of the sequester’s initial impacts on programs that help struggling Americans. The harmful cutbacks explain why Reid and Democrats desperately want a way out of Sequester Land. (Exact numbers will be different for 2014, because sequestration was not in effect for the entirety of 2013, and Congress could restructure the cuts).

Educational programs: Learning programs for poor kids saw a total of $2.7 billion in cuts. The $400 million slashed from Head Start, the preschool program for low-income children, meant reduced services for some 70,000 kids. Here’s how that panned out at the local level. The Head Start program in Jefferson County, Alabama, closed for 10 weeks, affecting 276 kids. Fifteen staffers were furloughed. In Fayetteville, Arkansas, the Head Start program ended 13 days early. In Eureka, Kansas, the program closed for good.

Title I Funding: The Department of Education’s Title I program, the biggest federal education program in the country, subsidizes schools that serve more than a million disadvantaged students. It was cut by $725 million.

Rural rental assistance: Cuts to the Department of Agriculture resulted in the elimination of rental assistance for 10,000 very low-income rural people, most of whom are single women, elderly, or disabled.

Social Security: Although Social Security payments themselves were not scaled back, cuts to the program resulted in a backlogging of disability claims.

Veterans services: The Transition Assistance Program was forced to cut back some of the job search and career services it provides to 150,000 vets a year.

Nutritional Assistance for Women & Children: The government’s main food stamp program is exempt from cuts, but other food programs took a whack. Some 600,000 women and children were cut from the Special Supplemental Nutrition Program for Women, Infants, and Children, which provides nutrition assistance and education.

Special education: $978 million in cuts affected 30.7 million children. For example, because of the scaling back of federal grants to states for students with disabilities, cash-strapped states and districts had to come up with the salaries for thousands of teachers, aides, and staff that serve special-needs kids. In Fort Myers, Florida, the Lee County school district had to lay off 100 employees, including 15 teachers, due to the lack of special education funding.

Job training programs: $37 million was slashed from a job retraining and placement program called Employment Services Operations, and $83 million was cut from Job Corps, which provides low-income kids with jobs and education.