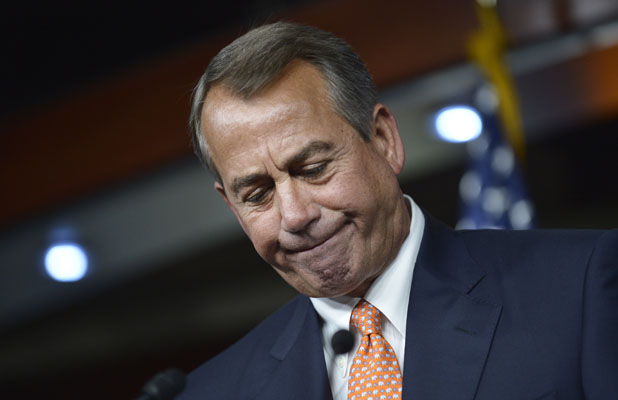 Why is House Speaker John Boehner defying democracy? There are about 175 House Republicans who would likely vote to continue government spending without blocking Obamacare, if given that chance. Add them to the 200 House Democrats who would support a clean continuing resolution that would undo the government shutdown underway, and—presto!—you would have a whopping 86 percent supermajority in favor of moving on. Yet Boehner refuses to bring such a measure to the House floor. Why not? The conventional explanation is simple: He would lose his speakership because the tea party House GOPers pushing for confrontation would rebel. Without the support of the 30 or more die-hard conservatives, Boehner would no longer command a majority within the House, and his gavel would disappear.

But how would such an anti-Boehner mutiny occur—and would it necessarily end up a success?

Under House rules, a speaker can be challenged at any time. Any of the 435 House members can introduce a bill to boot a speaker—and obtain a quick vote. According to the House rules, “A resolution declaring vacant the office of Speaker is presented as a matter of high constitutional privilege.” This means that such a measure essentially goes to the front of the line. It doesn’t have to wind its way through the rules committee, where the speaker and his allies could smother the legislation. Nor would this privileged motion require unanimous consent to reach the House floor. A House member need only announce his or her intention to place this resolution on the floor, and the speaker must schedule a vote within two legislative days. The measure then can pass on a majority vote, as long as a quorum (that is, half the House) is present.

If Boehner were to take on the tea partiers in his caucus, any one of them could force such a vote. Assuming the Democrats all voted in favor of the measure to dump Boehner as speaker, he could lose up to about 16 Republicans and still retain the position. But if more Rs joined the uprising, Boehner would be tossed. So one key calculation for Boehner—and for any mutineers-to-be—to consider is whether a rump group of Republicans could round up enough GOPers to vote him out of the top leadership post.

These rebels would have to depend on the Democrats voting en masse against Boehner. But would they really want to make common cause of that sort? Moreover, relying on the Dems would carry a risk. What if Rep. Nancy Pelosi (D-Calif), the House Democratic leader, were to play political mischief and instruct her colleagues to stand clear of the GOP civil war by not voting on the vacate-the-speaker measure? Presumably, the anti-Boehner forces would be crushed by non-tea-partiers. Of course, Boehner would then owe his speakership to Pelosi. Think of Javert being indebted to Valjean! Boehner might prefer to resign and enjoy slower days of golf and merlot. (How’s this for a backroom deal: Boehner brings a clean CR to a vote, and Pelosi agrees to help him hold on as speaker?)

There is an important Part II to any attempt to defenestrate a speaker: electing a new speaker. In 1997, top House Republicans plotted a coup against then-Speaker Newt Gingrich. The plan was to use a privileged resolution declaring the speakership vacant. But there was one giant glitch: The schemers couldn’t decide what would happen after Gingrich was thrown to the curb. It was “a plan of overambitious underachievers lacking foresight,” says Dick Armey, who was the House majority leader at the time (and who may or may not have been involved in the uprising, depending on whose account you believe). The get-Gingrich revolt fizzled.

If Boehner is cast out, the House would have to chose a new speaker, and Boehner could run again. Given the current R-D split of 232 to 200 (with three vacancies), Boehner would need 201 Republican votes to be restored to the post—assuming that the anti-Boehner Republicans do not vote with the Democrats to elect Pelosi or another Democrat as speaker. So Boehner could be pink-slipped as speaker if 16 or so GOPers turn against him (and are joined by all the Dems), but for the second vote Boehner could lose up to 31 Rs and still mount a triumphant return.

The rebellious Rs, most certainly, would look to back another Republican as speaker. (Technically, they might be able to vote for Sen. Ted Cruz; oddly, a speaker need not be a House member.) But the House GOP caucus would need to unify behind a candidate, or risk dividing its votes and creating an opportunity for the Democrats to elect Pelosi as speaker. So if a group of upstart GOPers moves against Boehner, it would have to back a speaker candidate whom the entire House Republican caucus would support. Rep. Eric Cantor (R-Va.)? Maybe. But the rebellion could trigger an internecine succession battle that is not easily resolved.

The bottom line: A tea party coup against Boehner could get complicated. He might even be able to survive such an assault. No doubt, Boehner would prefer not to have to contend with such a mess. But he’s already dealing with a historic muddle caused by his own Jacobins. Perhaps he’d be better off letting the House vote freely on this matter—that is, cutting off the tail rather than being wagged by it—and seeing what happens next.