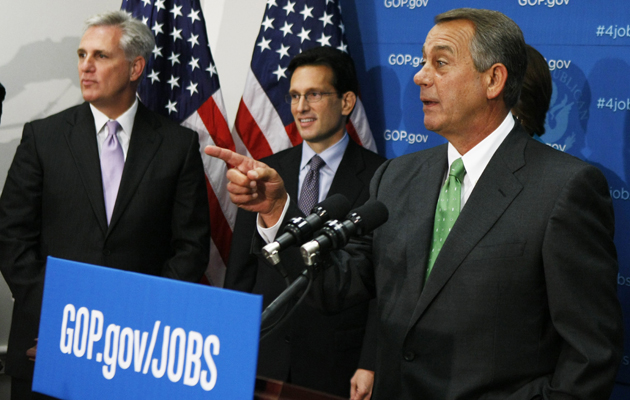 Step aside, WWII vets; House Republicans have found their newest government shutdown prop: children with cancer. On Wednesday, having caught wind of the news that about 200 patients—including 30 children—would not be admitted for clinical trials at the National Institutes of Health, the House quickly passed a bill to fund the NIH. (It passed similar resolutions for the National Park Service, the Department of Veterans Affairs, and the District of Columbia.) On Twitter, Rep. Steve Stockman (R-Texas) synthesized the new conservative talking points as only he could: “President Stompy Feet now says he’ll kill funding for children’s cancer treatment. Will the media still cover for him?” On Thursday morning, House Republicans who worked previously as doctors and nurses held a press conference on Capitol Hill to call once more for full funding of the NIH.

But missing from all of this is any explanation of what the Republicans’ continuing resolution would actually do: Enshrine the severe cuts imposed on the institute by sequestration. NIH lost 5 percent of its budget—or $1.7 billion—when the cuts included in the Budget Control Act went into effect last spring. It has adjusted by eliminating at least 700 research grants, and slowed down priorities such as developing a universal flu vaccine. As NIH director Dr. Francis Collins told the Huffington Post in August, “God help us if we get a worldwide pandemic.” (Making a bad situation worse, the Centers for Disease Control and Prevention has said it will be unable to effectively monitor flu vaccination programs and virus outbreaks during the shutdown.) In September, Collins suggested that the cuts to research could put “the next cure for cancer” on ice.

None of this should come as news to House Republicans. When Rep. Dennis Ross (R-Fla.) visited a cancer center in his district, he got a lecture from researchers, who said the NIH cuts had thrown their budget into flux and made it harder to treat patients. (Ross told the researchers he’d work to restore that missing funding.)

This being American politics in 2013, there’s no easy way out for NIH. House Democrats have already said they’d be okay with a “clean” continuing resolution that merely extends sequestration and preserves the steep NIH cuts, embracing the notion that reduced NIH funding is better than no NIH funding at all. Senate Democrats have also signaled that they’ve accept the lower funding levels in order to end the impasse.

There’s another part of the shutdown fight, though, in which the differences between Republican and Democratic positions are quite clear—and the effects much further reaching. It’s the Affordable Care Act, a sprawling new law that takes concrete steps to expand insurance coverage, eliminate lifetime and yearly insurance caps, and allow people (including children) with preexisting conditions to enroll in health insurance. The ACA, which in a rare moment of foresight Congress elected to fund separately from the annual appropriations process, is the reason the government is shut down—and the reason it will stay shut down for the near future. There is a battle on Capitol Hill right now over helping sick kids, but it’s not the one Republicans are grandstanding about.