The US economy added 148,000 jobs in September, fewer than expected, according to new numbers from the Labor Department, which were released Tuesday—more than two weeks late due to the government shutdown. The jobless rate fell from 7.3 to 7.2 percent, but as in previous months, the drop in unemployment is mostly due to the fact that fewer people were seeking work last month, and thus were not officially counted as unemployed.

The percentage of Americans who are working remained unchanged, at only 63.2 percent, the lowest labor force participation rate since 1986. As economist Dean Baker of the Center for Economic and Policy Research said Tuesday, “This continues the pattern that we have seen throughout the recovery as the unemployment rate falls mainly because workers leave the labor market. The unemployment rate is now down by 2.8 percentage points from its 10.0 peak in October of 2009. However, the employment rate is up just 0.4 percentage points from its low point hit in June of 2011.”

The unemployment rate for blacks and Hispanics remained disproportionately high. The jobless rate for African-Americans fell one percentage point in September to 12.9 percent; for Hispanics, the number dropped three percentage points to 9 percent.

The leisure and hospitality industry lost the most jobs since December 2009, a stark change from recent months which have seen gains in low-wage service sector jobs. Retail employment increased 20,800. Here’s a chart showing September gains and losses by sector, via Quartz: 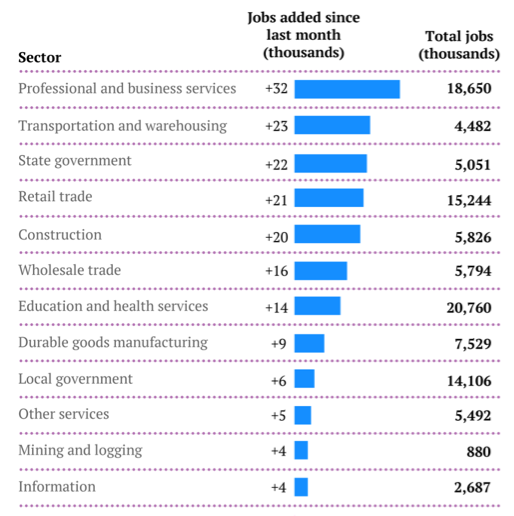 There was some mildly positive data in the jobs report. Part-time employment dropped 594,000, suggesting that the surge in part-time employment earlier this year was an aberration. That’s good news for the Obama administration, which has been trying to convince Americans that Obamacare’s requirement that employers offer insurance to people who work more than 30 hours has not caused employers to cut hours.

In other lukewarm news, average hourly earnings increased three cents in September. And construction payrolls increased 20,000, which could ease some economists’ fears that home building was leveling off.

As the Times reports, the dual battles over funding the government and raising the debt ceiling likely worsened the employment situation, “because hundreds of thousands of federal workers and contractors were furloughed and also because anxiety and uncertainty over the budget battle caused consumer confidence to plummet.” But we won’t see those effects until next month’s jobs report. Economists estimate the shutdown cut about 0.6 of a percentage point off fourth-quarter GDP.

More shenanigans over the budget and debt ceiling this winter, not to mention a possible extension of the deep budget cuts known as sequestration, could dampen the economy further. “It’s clear that the conservatives’ long march to austerity spending cuts has sapped aggregate demand from the recovery,” says Adam Hersch, an economist at the liberal think thank, the Center for American Progress. The stagnant economy and Congressional spats have led economists to predict that the Federal Reserve will likely delay scaling back it’s stimulus program.

Hersch says the report is “a stark reminder that it’s time for Congress to focus on the real economic challenges facing ordinary Americans: jobs, incomes, and the public institutions critical to our economy.”