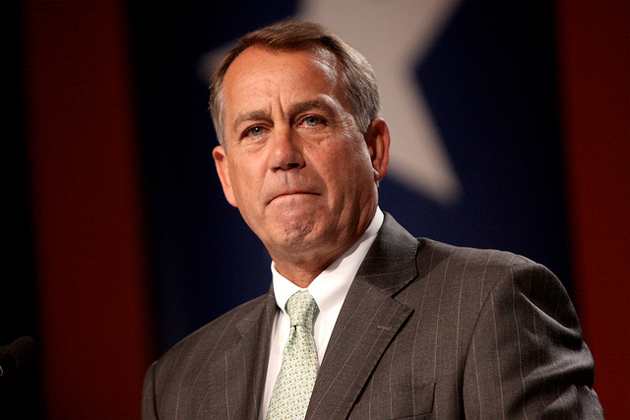 In March, the Republican Party released a 97-page report on its future prospects that chairman Reince Priebus had commissioned following the 2012 election. The party called the study its Growth and Opportunity Project report, but most members of the politerati referred to it as an autopsy. The hard-hitting study—authored by Henry Barbour, the nephew of former Mississippi Governor Haley Barbour, former Bush II press secretary Ari Fleischer, and a few other prominent GOPers—fingered what had gone wrong for the Rs and provided a roadmap for the coming years. But the party’s recent excursion into the government shutdown/debt ceiling quagmire shows that few members of its national wing absorbed the lessons the party’s coroners had assembled.

After convening in-depth focus groups of voters in Iowa and Ohio who used to call themselves Republicans, polling Republican Hispanic voters, consulting assorted pollsters, and surveying political practitioners at the local and national level, the group made some obvious conclusions. Noting the nation’s changing demographics, it maintained that the GOP had to reassess its relationship with Latinos: “If Hispanic Americans perceive that a GOP nominee or candidate does not want them in the United States (i.e. self-deportation), they will not pay attention to our next sentence.” Ditto concerning young voters: “A post-election survey of voters ages 18-29 in the battleground states of Virginia, Ohio, Florida, and Colorado found that Republicans have an almost 1:2 favorable/unfavorable rating. Democrats have an almost 2:1 favorable rating.” And the members of the GOP’s morgue brigade asserted that GOP governors had been doing a better job in promoting a positive image of the party than congressional Republicans. The party’s “messaging,” they observed, was hurting it.

Clearly, this point has been ignored by the Republicans who have pushed the party toward a government shutdown and a possible default. (Ted Cruz, this means you.) As Republican leaders on Capitol Hill—read: Senate minority leader Mitch McConnell—scurry to prevent a tea party-caused default if the debt ceiling is not lifted later this week, here’s a look at five key passages of the report that have gone unheeded by the Republican radicals in the House and Senate who have positioned the GOP as the party of hostage-taking.

THEN: “The GOP today is a tale of two parties. One of them, the gubernatorial wing, is growing and successful. The other, the federal wing, is increasingly marginalizing itself, and unless changes are made, it will be increasingly difficult for Republicans to win another presidential election in the near future….Public perception of the Party is at record lows.”

NOW: Since the report came out, these record lows have become lower. Last week, Gallup reported that the Republican Party was viewed favorably by only 28 percent of Americans, down 10 points from the previous month. The polling company noted, “This is the lowest favorable rating measured for either party since Gallup began asking the question in 1992.”

THEN: “At the federal level, much of what Republicans are doing is not working beyond the core constituencies that make up the Party.”

NOW: While tea partiers have cheered on Cruz and House Republicans who have demanded ransom for funding the government or preventing default—be it thwarting Obamacare or insisting on more spending cuts—this strategy has not played well with the general public. A recent NBC News/Wall Street Journal poll found that only 24 percent approve of the performance of Republicans in Congress and 70 percent disapprove. (Democrats had a 36/59-percent split.)

THEN: “The Republican Party needs to stop talking to itself. We have become expert in how to provide ideological reinforcement to like-minded people, but devastatingly we have lost the ability to be persuasive with, or welcoming to, those who do not agree with us on every issue.

“Instead of driving around in circles on an ideological cul-de-sac, we need a Party whose brand of conservatism invites and inspires new people to visit us. We need to remain America’s conservative alternative to big-government, redistribution-to-extremes liberalism, while building a route into our Party that a non-traditional Republican will want to travel. Our standard should not be universal purity; it should be a more welcoming conservatism.”

NOW: The shutdown was pursued by the Republicans who consider themselves conservative purists—and who have been supported and encouraged by outside groups seeking more conservative purity within the GOP. This political crisis occurred because a faction of the GOP in Congress was reinforced by far-right activists and advocates.

THEN: “Our job as Republicans is to champion private growth so people will not turn to the government in the first place. But we must make sure that the government works for those truly in need, helping them so they can quickly get back on their feet. We should be driven by reform, eliminating, and fixing what is broken, while making sure the government’s safety net is a trampoline, not a trap.

“As Ada Fisher, the Republican National Committeewoman from North Carolina, told us, ‘There are some people who need the government.'”

NOW: In recent weeks, several congressional Republicans pressing for a shutdown and for leveraging the debt ceiling have celebrated the shutdown and given the impression they see government as the enemy. That NBC News/Wall Street Journal poll reported that 52 percent of Americans believe government “should do more to solve problems and help meet the needs of people.” Forty-four percent said government “is doing too many things better left to businesses and individuals.”

THEN: “As part of the Growth and Opportunity Project’s effort, focus groups were conducted in Columbus, Ohio, and Des Moines, Iowa, to listen to voters who used to consider themselves Republicans. These are voters who recently left the Party.

“Asked to describe Republicans, they said that the Party is ‘scary,’ ‘narrow minded,’ and ‘out of touch’ and that we were a Party of ‘stuffy old men.’ This is consistent with the findings of other post-election surveys.”

NOW: In the NBC/Wall Street Journal poll, 53 percent blamed the GOPers for the shutdown. (Only 31 percent pointed the finger at Obama.) Seventy percent said they believed the Republicans were “putting their own political agenda ahead of what is good for the country.” Given that most respondents believed the shutdown was causing harm to the nation, it’s a fair bet that the actions of the GOP are seen by many as “narrow minded” or “out of touch.”

When the GOP autopsy was released seven months ago, conservatives—especially those who oppose immigration reform—howled that Priebus and establishment Republicans (including Karl Rove) were trying to neuter right-wingers and dilute the core ideology of the Grand Old Party. But it turns out they had little reason to worry. The report that Priebus hailed at the time—and its primary message about messaging: Don’t let extremists drive our bus—has had no discernible impact on House Speaker John Boehner, the tea partiers in his House Republican caucus, Sens. Cruz (R-Tex.), Mike Lee (R-Utah), and Rand Paul (R-Ken.), and other GOPers who have pressed for ideologically-fueled conflict. Yet given that the current polls show Republicans have fallen deeper into the Mariana Trench of public opinion, it seems that the morticians were right. It’s too bad for them that their autopsy turned out to be DOA.