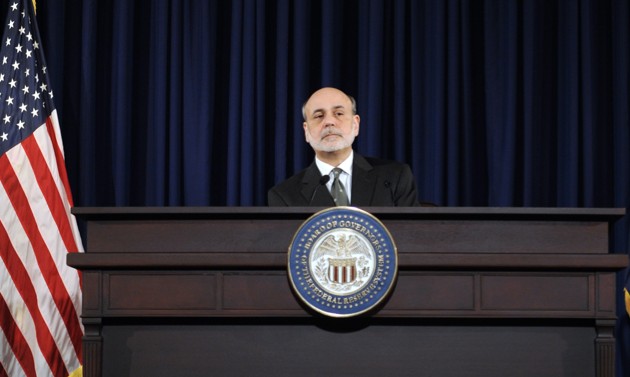 Congress could finalize a deal to prevent a default by Wednesday afternoon, but it’s still not certain if the House will approve of the plan. In the event that we do default, the Treasury Department could possibly stave off total catastrophe for a while by prioritizing certain payments over others. But there are also measures that the Federal Reserve could take, not just to soften the impact of going over the debt brink, but to prevent default altogether. Here are four of them:

The central bank could cancel the nation’s debt: We owe a lot of our debt to ourselves, after all. As Rep. Alan Grayson (D-Fla.) wrote in an op-ed for Reuters last week:

The Treasury Department issues U.S. debt, and lots of it. So you would think that America is deeply indebted to its bondholders. Yet increasingly, it is the U.S. monetary authority, the Federal Reserve, and not private investors, who buys this debt.

So a simple solution to the impasse is as follows: Federal Reserve Chairman Ben Bernanke should simply cancel the Treasury debt that it owns. The government can just forgive the government’s debt.

Yet canceling this debt would give the government substantial room under the debt ceiling to manage its finances. It would end the debt ceiling standoff in Congress, and it would prevent a default.

That’s probably not going to happen, though.

Fed Chairman Ben Bernanke could lend to the Treasury Department: That might entail breaking the law, but it could be a better option than Armageddon. As the New York Post noted last week:

Some Washington insiders and Wall Streeters are talking about a second option to avoid a default: looking to Bernanke to lend money to the Treasury.

But, it turns out, under normal circumstances, lending to the US Treasury is illegal under the Federal Reserve Act.

But Cullen Roche, founder of the Orcam Financial Group and an expert on monetary policy, believes that in this emergency Bernanke could play a get-out-of-jail-free card.

“If the options are default or no default then I think the Fed should exercise what’s called the ‘exigent circumstances’ clause [of the Federal Reserve Act] and lend directly to the US Treasury,” said Roche.

“They did this with Bear Stearns and AIG [in the 2007-2008 financial crisis] so I think saving the US government is a bit more important than those two entities.

The Fed could keep lending to banks even if Treasurys plummet: If the Fed can’t prevent default, then it can at least soften the blow. The Fed makes short term loans to US banks and takes US Treasurys as collateral. But if Treasurys drop in value, they may no longer qualify as adequate backing. The Fed could choose to continue lending to banks nonetheless, something the Fed considered at the height of the 2011 default scare. As Charles Plosser, the president of the Philadelphia Federal Reserve Bank told Reuters in 2011, “Do we treat [Treasurys] as if they defaulted and don’t lend against them?” Or, he asks, “Do we treat them as if they didn’t default, in which case we would be saying we are pretending it never happened?”

It could prop up the price of Treasurys: If the federal government hits the debt limit and has to stop paying interest on a portion of it’s debt, the value of Treasurys will decline. But as Marcus Stanley, executive director of Americans for Financial Reform explains, “the Fed could support the price of that debt on the assumption that the government would eventually continue to pay it off.” That would mean the Fed could buy Treasurys from anyone on the market for a reasonable market price instead of the depreciated price.

As Stanley notes, “When you have power to print money, you really have a lot of things you can do.”