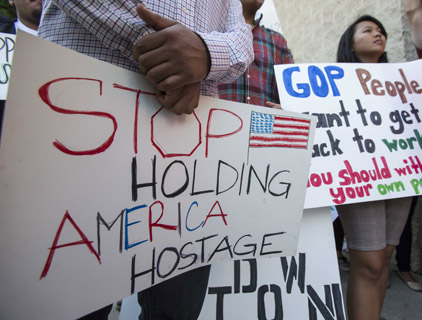 It’s no secret that the government shutdown has been catastrophic for Republicans. A Wall Street Journal/NBC poll released earlier this week found that just 24 percent of Americans hold a favorable opinion of the Republican Party, the lowest rate in the poll’s two-decade-plus history. But how will GOP’s plummeting popularity affect its prospects at the ballot box? Another poll from Public Policy Polling (PPP), which was released Wednesday, offers some clues.

PPP polled voters in six key states, which will likely determine control of the Senate after the 2014 election. It found that the majority opposed the shutdown and wanted to punish the politicians responsible. As a results, Republicans are trailing in five of the six races—even though most respondents voted for Republican Mitt Romney in last year’s presidential election.

Among data geeks, PPP methods are somewhat controversial. The New Republic’s Nate Cohn recently took the firm to task, saying it has “withheld controversial elements of its methodology, to the extent it even has one, and treated its data inconsistently.” Nevertheless, even critics admit its projections have been pretty much on target.

The new PPP report cites several races where the shutdown has apparently given Democratic candidates a leg up:

-In Michigan’s open seat race Democrat Gary Peters leads Republican Terri Lynn Land 43/36. Voters are opposed to the shutdown by a 65/27 margin, and when voters are informed that Peters stood against the shutdown in the House his lead expands to 50/36.

-It’s a similar story in Iowa’s open seat race- there Democrat Bruce Braley leads a generic Republican opponent 45/41. Voters are against the shutdown 64/27, and when voters are informed of Braley’s opposition his lead goes up to 7 points at 46/39.

-In Louisiana [Democrat] Mary Landrieu leads Republican challenger Bill Cassidy 48/41 for reelection. Voters oppose the shutdown 60/30, and 47% say they’re less likely to vote for Cassidy for the Senate next year because he supported it compared to only 32% who are more likely to.

PPP’s findings also suggest that the shutdown could play a role in the closely watched race for the seat of retiring Sen. Saxby Chambliss (R-Ga.). The two top Republican contenders, Reps. Paul Broun and Phil Gingrey, favored the shutdown like most of their colleagues in the House Republican caucus. As a result, PPP found, 47 percent of the state’s voters were less likely to support Broun or Gingrey in a general election. This is good news for the Democratic candidate, Michelle Nunn. After being informed that her most likely opponents were House Republicans who supported the shutdown, 48 percent of those polled said they would back Nunn, versus 42 percent for whichever Republican survives the primaries.

The sinking poll numbers haven’t deterred Nunn’s would-be challengers. In an interview with CQ Roll Call on Tuesday, Gingrey insisted House Republicans are “not posturing” when they say they’re willing to breach the debt ceiling to win concessions from Democrats. He added that he saw the standoff as an “opportunity for a ‘Braveheart’ moment” and that he and his colleagues would not necessarily back down “for fear of losing the House and not gaining control of the Senate.”