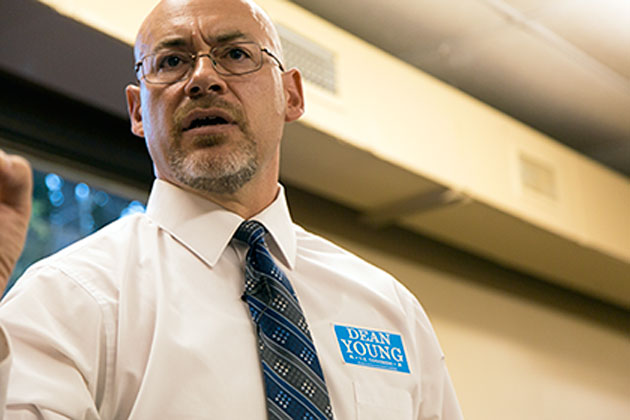 Update: Former state Sen. Bradley Byrne narrowly defeated Dean Young on Tuesday night to win the Republican nomination for Alabama’s special election, all but guaranteeing him a spot in Congress. The outcome is being hailed as a win for Republican establishment, which poured significant resources into Byrne’s campaign against the tea partier Young. But as I explained on Monday, there’s little daylight between the two camps when it comes to policy. Even in a loss, the tea party won big.

It would be tough to find a political office-seeker less prepared for the job he’s running for than Alabama congressional candidate Dean Young. Asked by the Guardian last week to identify the current House majority whip, the Republican suggested House Majority Leader Eric Cantor (R-Va.), who left his old post almost three years ago. Quizzed on the current treasury secretary, Young identified Henry Paulson (who left four years ago) and then Tim Geithner (who left his post 10 months ago). Young, who also called President Obama’s country of origin “the $64,000 question,” didn’t go so far as to suggest that the Gettysburg Address is where Lincoln lived, but that’s probably because no one asked.

On Tuesday, Young will face off against former state Sen. Bradley Byrne in a runoff for the Republican nomination in the special election to replace former GOP Rep. Jo Bonner, who resigned to take a job at the University of Alabama. (In March, Mother Jones reported that Bonner had gone on an all-expenses-paid African safari under the auspices of investigating Al Qaeda’s ties to poaching.) In a deep-red district, the runoff winner is all but assured a spot in Congress—which means that Young, who held a narrow lead in the final poll of the race, could soon be headed to Washington.

For the last two decades, Young has built his political identity on combating the scourge of homosexuality, which he has called “deviant” and “destructive.” In an interview with the Associated Press during his 2002 campaign for Mississippi secretary of state, Young suggested that gays were not indigenous to Alabama and must have moved there from more gay-friendly jurisdictions. “If they don’t like the laws of Alabama…then maybe they need to go back to California or Vermont or wherever they came from,” he said. He referred to gay rights activists as “nothing more than a gnat on the rear end of an elephant,” and nearly came to blows with his GOP opponent during a televised debate.

Before running for office, Young cut his teeth as a social-conservative advocate and spokesman for then-District Judge Roy Moore, who became a right-wing icon for keeping a stone sculpture of the Ten Commandments in his courthouse. “Either you get your lives straight or you get back in the closet where you came from,” Young told gay rights activists at a 1996 rally in support of Moore. “The people of Etowah County are going to stand against the homosexual lifestyle and against things that are against the laws of God,” he added.

At another rally at Moore’s courthouse one year later, Young said of homosexuality, “If animals tried it, they would get bit.” (According to biologists, animals try it all the time.) He added, “We love all homosexuals, but we don’t appreciate their lifestyle. To the homosexuals who will not change, you are not welcome here in Etowah County or in the state of Alabama.” (Young denied saying this in a statement to the Daily Caller‘s Alex Pappas, who first reported on his ’90s-era activism, but he repeated the refrain at multiple speeches.)

Young justified his position in 2002 by noting that under the state’s anti-sodomy statute, gay sex was technically a felony. Speaking out against the gay “lifestyle,” he said, “is no different than speaking against murder and other crimes. It breaks the law of Alabama to have homosexual conduct and is against the laws of nature and nature’s God.”

While running for Congress, Young has kept his gaze squarely on the wedding chapel. In August, he asked his GOP rivals to sign a pledge to oppose any recognition of marriage for same-sex couples if elected. “Marriage is between one man and one woman and no one needs to go to Washington representing south Alabama if they don’t believe that,” he said. “If you want to have homosexuals pretending like they’re married, they need to go to the Democrat party.”

At a debate in October, Young warned that America’s days were numbered unless it took dramatic steps. “We are witnessing the end of a Western Christian empire,” he said. “We will see the end of this nation if we don’t do something, and do it fast.” He summed up his views on stem cell research thusly: “Stem cell research, they tell me that fat has the same thing and there is plenty of fat here. We don’t mess with babies.” (The idea that fat cells could be a stand-in for embryonic stem cells is still being researched.)

Political pundits have framed the Young–Byrne as the latest front in an intraparty row between tea partiers and the GOP establishment. That’s not quite right—major tea party groups have largely stayed out of the race, and Young was preaching his particular brand of conservatism long before Rick Santelli and Sarah Palin helped launch a movement. Byrne, meanwhile, has given no indication that he’d be anything less than a reliable vote for conservative causes, and his failure to urge gay people to leave Alabama is one of the few real policy differences he has with Young. The contrast between the two is largely cosmetic. Byrne, like Young, opposed the deal that prevented the United States from defaulting on the debt. Byrne, like Young, believed that it was a smart decision to shut down the federal government over funding the Affordable Care Act. Byrne supported the teaching of creationism as a member of the Alabama Board of Education, thinks gun control is counterproductive, and rails against “the corrupt IRS.”

The usual term for someone like that is “tea partier.”