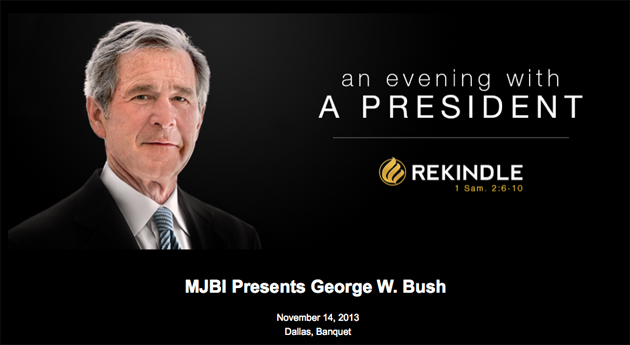 Update (11/8/13): After this story published, the Messianic Jewish Bible Institute removed references to George W. Bush’s scheduled appearance from its website. But Freddy Ford, a spokesman for the former president, told Mother Jones on Friday afternoon that Bush’s plans “haven’t changed,” and he will appear at the event.

Update 2 (11/11/13):  On Monday, Abraham Foxman, the national director of the Anti-Defamation League, released a statement on this story. “We were disappointed to learn that former President George W. Bush has decided to move ahead with his plan to speak at a fundraising event for an evangelical proselytizing group whose stated goal is to convert Jews to Christianity,” Foxman said. “President Bush is a friend who has an abiding love and respect for Israel and the Jewish people.  I know that he does not represent or embrace the purpose or the mission of this group, and therefore I wish he would not speak there.”

Next week, former President George W. Bush is scheduled to keynote a fundraiser in Irving, Texas, for the Messianic Jewish Bible Institute, a group that trains people in the United States, Israel, and around the world to convince Jews to accept Jesus as the Messiah. The organization’s goal: to “restore” Israel and the Jews and bring about about the second coming of Christ.

Messianic Jews have long been controversial for Jews of all major denominations, who object to their proselytizing efforts and their message that salvation by Jesus is consistent with Jewish theology. Last year, Abraham Foxman, president of the Anti-Defamation League, told Politico that former Sen. Rick Santorum’s appearance at an event hosted by another Messianic Jewish organization, the Messianic Jewish Alliance of America, was “insensitive and offensive.” And Commentary magazine, which bills itself as a “conservative American journal of politics, Judaism, social and cultural issues,” noted, “it must be understood that the visceral distaste that the overwhelming majority of Jews have for the Messianics is not to be taken lightly.” Many Messianic Jews are Christians who have adopted aspects of Jewish ritual observance; others are Jews who share the Christian belief that Jesus is the Messiah.

Asked about Bush’s upcoming appearance at the Messianic Jewish Bible Institute (MJBI) event, Rabbi David Saperstein, the director of the Religious Action Center of Reform Judaism, said, “It’s disappointing that he would give his stamp of approval to a group whose program is an express effort to convert Jews and not to accept the validity of the Jewish covenant.” Foxman was traveling overseas and unavailable to comment.

(After this story published, Rabbi David Wolpe of Los Angeles’ Sinai Temple, whom Newsweek has called the most influential rabbi in the country, tweeted, “This is infuriating.” On Monday, he published a story in Forbes Forward on the subject, writing, “the sudden rise of ‘Messianic Jews’ owes more to a clever way of misleading untutored Jews than to making theological sense. It should not receive the imprimatur of a former President of the United States.”)

Based in Dallas, the MJBI claims that it acts like the Apostle Paul in helping to “educate Christians in their role to provoke the Jewish people to jealousy and thus save some of them (Romans 11:11-14).” It has Bible schools in 12 countries, an online school of “Messianic theology,” and programs to train Messianic rabbis and pastors. Its logos feature a star of David and a menorah, and its website promotes the weekly Torah portion, a “Yiddish Mama’s Kitchen,” and links to purchase Judaica and books, such as Christ in the Old Testament. The nonprofit organization brought in approximately $1.2 million in revenue in 2011, the last year for which records are available.

At the November 14 event, which will be held at the Irving Convention Center, Bush will discuss his White House experiences, according to promotional materials. Bush, the group says, will “share his passion for setting people free.” Last year, Glenn Beck was the star of the group’s fundraiser, which was held at Cowboys Stadium in Arlington, Texas.

This year’s event is designed to bring in funds for the group’s proselytizing operations. And the former president is helping out with more than just speech-making. The most expensive of the ticket packages, which range from $100 to $100,000, includes 20 invitations to a VIP reception and photo opportunity with Bush, 10 signed copies of Bush’s book Decision Points, and passes to tour the George W. Bush Presidential Library and Museum.

Alisa Stephenson, MJBI director of events and partner relations, would not say whether Bush is receiving a speaking fee for his appearance. “We cannot have any outside advertising or any media whatsoever involved in this, so I most likely cannot answer any of your questions,” she tells Mother Jones.

At last year’s MJBI fundraiser, Beck received a “Defender of Israel” award. During Beck’s time as host of his Fox News program (which ended in 2011), hundreds of Jewish leaders denounced his on-air rhetoric as anti-Semitic—particularly his repeated invocation of Nazis and the Holocaust to demonize political adversaries and his accusation that George Soros is a “puppet master” who collaborated with the Nazis. “One of the reasons why I love Israel so much is I’m a guy who’s for the underdog,” Beck told the audience. “I’m a Mormon, which is kind of the Jew of the Christian world.”

Robert Morris, pastor of Gateway Church in Dallas, which Beck attends, introduced Beck as a “prophet” at the event. Morris told the crowd that his church has supported MJBI because “when we do this, the Bible tells us, it’s going to change the whole world. That it’s going to hasten the coming of the Lord Jesus Christ, and it’s going to bring about worldwide revival.”

When asked how the MJBI managed to secure Bush to keynote its fundraiser, Stephenson cited its track record of drawing influential speakers, pointing to the appearance by Beck.

At last year’s event, members of the MJBI’s board of directors explained the organization’s mission of converting Jews to an audience of hundreds who were seated on a professional football field, wearing formal clothes, and eating pork barbecue. Rabbi Jonathan Bernis, a leading Messianic Jew and televangelist who chairs MJBI’s board of directors, maintained that “our numbers are growing and growing,” because “the Bible predicted that the day would come when the blindness would come off the eyes of the people it all began with.” He was referring to Jews. The Bible, Bernis continued, “tells us that the day will come when all of Israel will be saved.” The MJBI, Bernis said, “is one of the ministries that God has raised up to bring that to pass.” Other featured speakers last year included David Barton, the religious right’s discredited “historian,” who this week used Beck’s radio show to announce that he won’t challenge Sen. John Cornyn (R-Texas) in next year’s Republican Senate primary.

Another MJBI board member, Rabbi Marty Waldman of Baruch HaShem, a Messianic congregation in Dallas, described his own conversion experience before making a pitch to the audience to donate money to MJBI. Money, he explained, is needed to hasten the return of Jesus. With the funds it collects, Waldman said, MJBI trains “people to preach the good news of the Messiah to the Jewish people.” That’s important, Waldman noted, because when there are “enough” Jewish people who call Jesus their savior, “some sort of a trigger will go off in heaven, and our father in heaven will say, ‘Okay, son, it’s time to get your bride.'”

At last year’s MJBI event, a group called the Christian Heritage Foundation displayed a collection of Torah scrolls outside the Miller Lite Club at Cowboys Stadium. On the field, a shofar was blown, to applause.

Research for this article was supported by a 2012 Knight Luce Fellowship for Reporting on Global Religion. The fellowship is a program of the University of Southern California’s Knight Chair in Media and Religion.