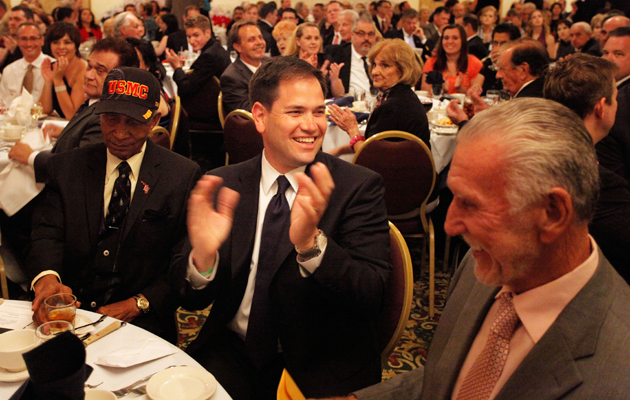 Rubio, a possible GOP presidential candidate in 2016, will deliver the keynote address at the annual fundraiser for the Florida Family Policy Council, a prominent social conservative organization that promotes so-called “conversion therapy” to help LGBT individuals become straight. Conversion therapy has been condemned as a form of abuse by psychologists. It is banned outright in a handful of states beyond New Jersey, including California. The American Psychiatric Association, which does not endorse conversion therapy, says the practice is at best ineffective and at worst can “reinforce self-hatred already experienced by the patient.”

According to an invitation to the November 16 event, first reported by the progressive watchdog site Right Wing Watch, the dinner will honor Staver, dean of Liberty University School of Law and founder of the Liberty Counsel, which provides legal support to social conservative organizations. Staver’s group filed a lawsuit against Christie last week alleging that New Jersey’s new ban on gay conversion therapy prevented a couple from properly treating their son. Staver has a history of making incendiary claims about gays. In June, he claimed that the passage of the Employee Non-Discrimination Act, which would prohibit employers from discriminating against LGBT employees and applicants, would “result in significant damage and even death of some individuals.” After the Supreme Court struck down the Defense of Marriage Act last summer, Staver suggested the decision would bring the nation closer to “the realm of rebellion.”

John Stemberger, the Florida Family Policy Council’s president, is also an anti-gay activist. He is chairman of Trail Life, the “moral alternative” to the Boy Scouts of America, which recently lifted its ban on gay Scouts. Trail Life won’t accept openly gay boys as members, but offers counseling services to kids who suffer from “gender confusion.”

“We’re not going to tolerate somebody who’s, you know, here and queer, loud and proud, all of that nonsense,” Stemberger told social-conservative radio host Janet Mefferd. Stemberger, a lawyer, also triggered a minor international incident in 1999, when he sued Dollar rental car for negligence for renting a vehicle to an Irish tourist who got in an accident with his client. “Anyone who has studied Ireland knows it’s just a fact: To the Irish, drinking and driving is not a big deal,” he said at the time. The former mayor of Dublin told the Irish Times that Stemberger’s lawsuit was “racist and absurd.”

Rubio’s office did not respond to a request for comment.