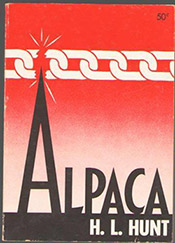 Alpaca: Not about those cute little llama-looking animals.

One of the odder details in Dallas 1963, Bill Minutaglio and Steven L. Davis‘ new book on the JFK assassination and the superheated political climate of the early ’60s, is a modest proposal for transforming American democracy as we know it. The source of the idea is Dallas oilman Haroldson Lafayette “H.L.” Hunt—a JFK-bashing billionaire bigamist whom William F. Buckley, Jr. described as a man “of eccentric understanding of public affairs, of yahoo bigotry, and of appallingly bad manners.” Once one of the richest men in America, Hunt is thought to have been an inspiration for J.R. Ewing.

In 1960, Hunt self-published a novel called Alpaca. In it, he described a fictional republic of the same name whose constitution enshrined the concept of “graduated suffrage,” by which votes are apportioned by income and age, with as many as seven “bonus” votes going to the richest citizens.

Here’s how it works: In Alpaca, every citizen 18 and older may vote. Voters between 22 and 65 automatically get two votes apiece; young and elderly voters get one vote. Beyond that, citizens may earn “premium votes,” based on how much they pay in taxes: 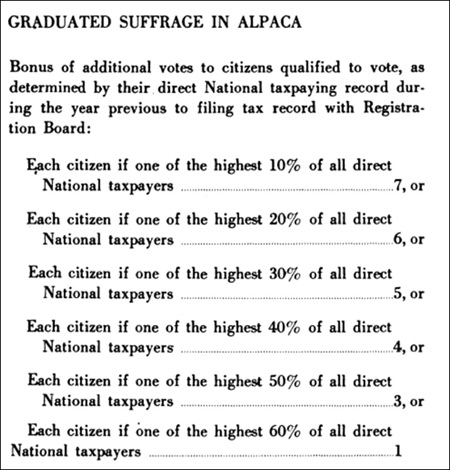 Assuming that the Alpaca’s tax system works like ours, the top 10 percent of taxpayers likely would be the wealthiest 10 percent of citizens. So the 55-year-old CEO of Alpaca’s largest fast-food chain might get nine votes, while his 19-year-old counter worker might get just one. (The Alpacan system has some wiggle room for the under-enfranchsied: It doles out two extra votes to retirees who forsake their official or military pensions, government employees who give up half their salaries, and citizens who pay a “poll tax” of more than 440 pounds of wheat or rice.)

Hunt explains the rationale behind the income-based rationing of voting power:

The grant of additional voting power to those who pay a larger part of the taxes is prompted by the logic that the citizen’s sense of responsibility rises in direct ratio with his contribution to the nation. The recognition that he has a direct stake in the government and its spendings gives him an alertness and caution in the exercise of his citizenship which is seldom found in the non-taxpayer and the very small taxpayer.

In other words, the makers and job creators deserve a greater political voice than the takers and moochers, who “could be expected to vote alike”—and presumably in opposition to the interests of their wealthy betters. (Fast forward to Mitt Romney’s 47 percent video.)

Though Hunt clearly endorsed the Alpaca system, his book didn’t speculate how its application at home might affect American politics. Yet what would happen if we implemented his plan in 21st century America? How would officially stacking the deck in favor of the superwealthy change a system where they already wield disproportionate influence? Would it upend partisan politics as we know it?

First, let’s look at how Americans voted in the 2012 presidential race based on income. According to exit polls, 53 percent of voters making $50,000 or more voted for Romney, while 60 percent of those making less than $50,000 voted for Obama. 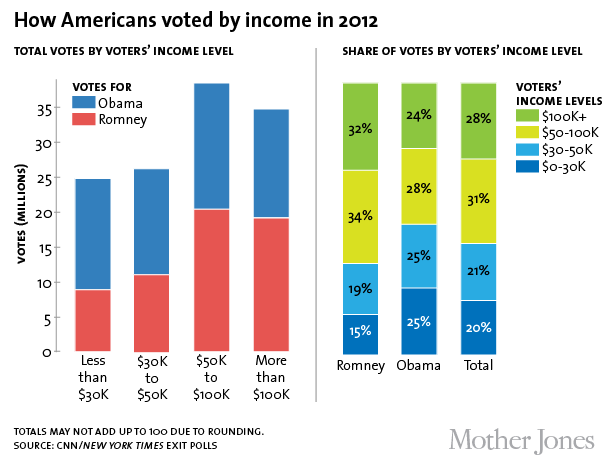 So, if Hunt’s system of graduated suffrage was in place, would it have boosted the electoral power of Romney’s older, richer constituency enough to flip the election? To find out, I did the math. In order to determine how many income-based bonus votes would be distributed, let’s first look at who pays taxes. According to IRS data, the roughly 198 million Americans who filed income tax returns in 2011 broke into these income levels: 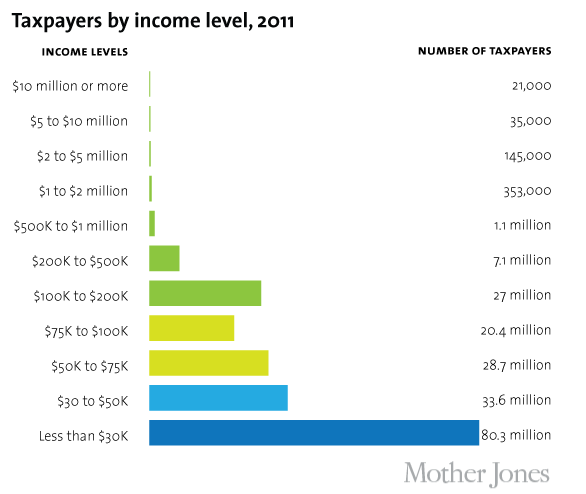 After applying the Alpaca model to the taxpayer data (7 additional votes going to the top 10 percent etc.), here’s how many extra votes each income level would receive: 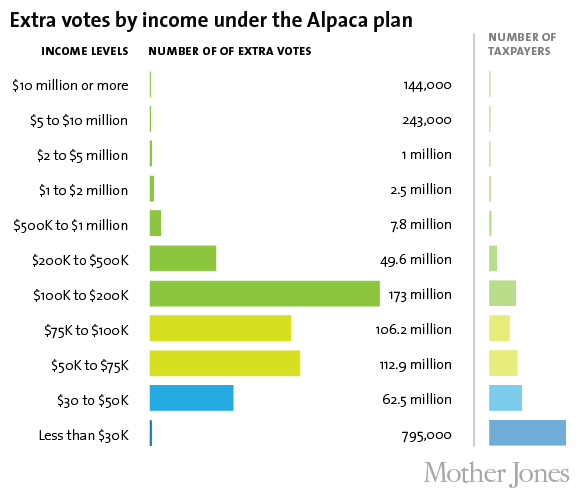 In this scenario, the 500,000 or so Americans earning $1 million or more would get 3.9 million extra votes, effectively increasing their voting power by 700 percent. The 84 million Americans making $50,000 or more would get 453 million extra votes while the 114 million making less than $50,000 would get just 63 million bonus votes. And that’s before you count the extra votes given to voters between 22 and 65.* Once I factored in extra votes for age (assuming that the age breakdown of 2012 voters was the same across all income levels), I was ready to rerun the most recent presidential election, Alpaca-style.

The result? Mitt Romney wins, but not by the landslide you might expect.

The result? Mitt Romney won—but not by the landslide you might expect.

In fact, under graduated suffrage, Romney would get 52 percent of the 1.8 billion votes cast—essentially the mirror image of Obama’s actual win. And it wouldn’t be the superwealthy that carry the election for him, but the well-off voters in the $50,000 to $100,000 bracket, who received the lion’s share of extra votes based on income. The 10-percenters are enough of a minority that their overall share of the total vote didn’t change much under the one-millionaire-seven-votes system. But the share of the Romney-leaning folks with above-average incomes jumped considerably—from less than a third of total votes in 2012 to more than half in the hypothetical election. And the millions of Americans making $30,000 or less got crushed: Their share of the vote dropped from 20 percent to 4 percent. 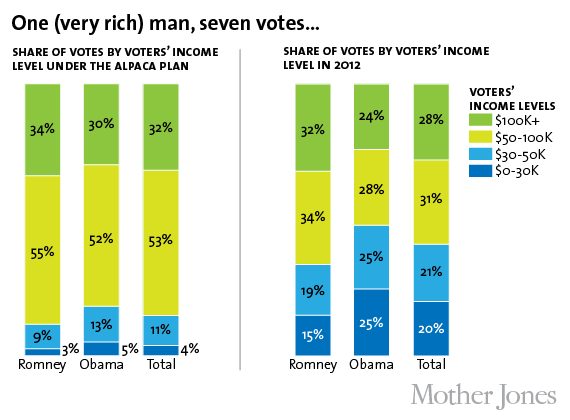 Clearly, Hunt’s system would turn the American political system on its head, but perhaps not as dramatically as he might have hoped. But then, Hunt’s oligarchic utopianism extended beyond vote rigging: Alpaca also bans discussing politics and government business via “radio, TV and the theater” as well as public meetings of more than 200 people. Print media would be the only officially sanctioned medium for news and opinion. “The purpose of this limitation,” Hunt wrote, “is to prevent the illiterate or thoughtless from being aroused in “mass to impulsively overcome soundly considered, responsible views expressed by the printed word.” No doubt he would have loved the internet.

*A couple of things I did not try to include in my calculations: In Alpaca, corporate taxes are also counted toward one’s total tax bill, so it’s possible that the final distribution of votes is more concentrated toward the very top. Also, the Alpacan system assumes that men are primary breadwinners: A woman who earns less than her husband gets the same number of bonus votes as he does; yet a man who earns less than his wife “is on his own in making his showing for increased voting power.”