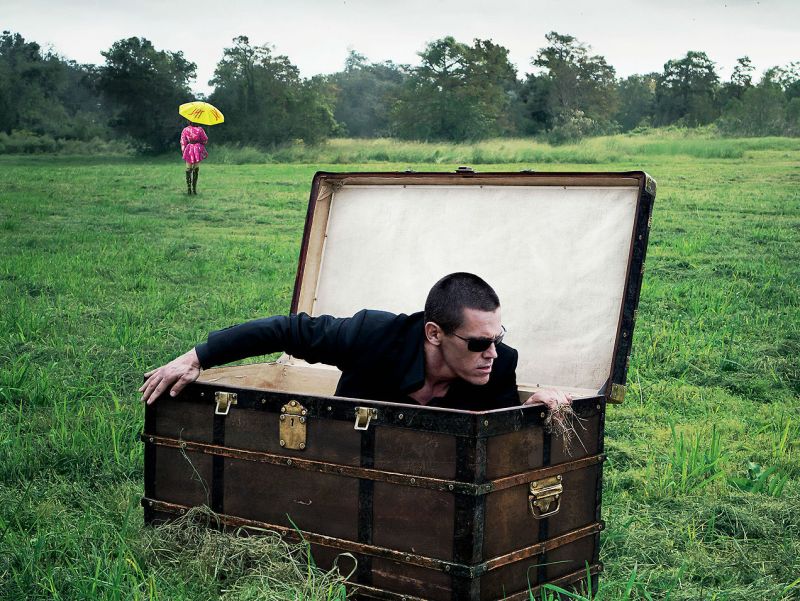 Those are the three words director Spike Lee used to explain the studio-led mangling of his latest film, Oldboy (FilmDistrict, 104 minutes).

The movie, which hits theaters on Wednesday, is a remake of Park Chan-wook‘s acclaimed 2003 South Korean revenge film of the same name. Lee’s version stars Josh Brolin as Joe Doucett, an alcoholic ad man and deadbeat father who is mysteriously abducted in 1993. He is held in a privately run detention facility (managed by a warden played by Samuel L. Jackson), where he learns he’s been framed for the rape and murder of his ex-wife. The authorities are hunting him, and his young daughter is placed into foster care. Twenty years later (a passage of time that Lee marks with clips of Clinton, Bush, 9/11, Iraq, Katrina, Obama, and more), Joe is suddenly released, and embarks on a gore-filled mission to find his daughter, make his captors suffer, and discover why he was detained for two decades.

The remake is well-made and features fine performances from Brolin, Elizabeth Olsen, and Sharlto Copley (as the billionaire villain); but it lacks the fearlessness and emotional wallop that made the Korean version a modern classic. (Whatever can be said of Lee’s re-imagining, though, it’s worth thanking the heavens that the project fell out of Steven Spielberg‘s hands.) Even if you eschew the inevitable comparisons to the original, it still feels like something is missing from Lee’s rendition—as if something was torn from the film, keeping filmmakers from realizing its potential as a darkly operatic masterpiece.

Turns out, there was something missing: roughly an hour and 20 minutes! In an interview with the New York Times, Lee discusses how studio demands and interference led to the downsizing of a key scene and the original three-hour version as a whole (the run time of the Korean original is two hours). Only a handful of people know what this director’s cut looks like:

The most difficult challenge for Mr. Brolin and Mr. Lee was reinventing the original film’s centerpiece fight sequence: a side-scrolling, ferociously violent hallway battle in which the protagonist slays dozens of enemies, mostly with a hammer, all in one uninterrupted long shot. Not one to back away from a challenge, Mr. Lee said he tripled the length of the fight sequence and expanded the set from one hallway to three parking lot ramps.

Because they were aiming to get it in one shot, Mr. Brolin trained for six weeks to memorize the choreography. After seven complete takes, Mr. Brolin has said, he broke down in tears. That scene, however, along with much of Mr. Lee’s initial, three-hour cut, was trimmed by the studio to make the final version’s…run time.

Asked to explain why the scene was edited, Mr. Lee shrugged. “Tough business,” he said…Asked once more, he finally elaborated. “Three words.” If Mr. Lee has a signature shot, the third word, placed between “tough” and “business,” is the signature of his film’s co-star Samuel L. Jackson.

(New York Times editors have a strange, well-documented allergy to the word “fuck” and its variants, as you can see.)

But the question remains: Will we ever get to see Spike Lee’s true vision for Oldboy—restored on DVD in a director’s cut, perhaps? According to a representative for 40 Acres and a Mule Filmworks, Lee’s production company, it’s up in the air. “We don’t know about that at this time,” he tells me. He also could not confirm whether or not the three-hour version even exists anymore, or if the footage had been lost to the cutting room floor. (Lee was unavailable for comment on this story.)

For now, there’s no way of knowing if the (significantly) extended cut is any better than the theatrical one. However, studio execs are well-known for their uncanny ability to royally screw a director’s fine work in the service of mass appeal. Sometimes it’s impossible to tell if a movie is any good until you watch the director’s cut (think: Blade Runner, Once Upon a Time in America, and other classics). For what it’s worth, Brolin himself has acknowledged that he prefers Lee’s initial three-hour picture. As for the version getting a wide release?

“I do have opinions, but it’s better to bite my tongue,” the Oldboy star said of Oldboy.

Anyway, here’s a trailer for the remake:

And here’s one for the original Oldboy: