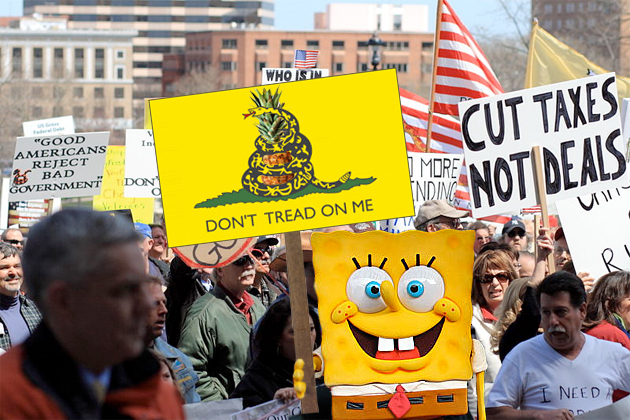 After years of vilifying him as a flamboyantly gay, liberal propagandist, conservatives are now claiming SpongeBob SquarePants as their hardworking, anti-food-stamp hero.

On Monday, November 11—almost two weeks after the nation’s food stamps program was slashed by $5 billion—Nickelodeon is set to air “SpongeBob, You’re Fired!” in the United States. (The episode aired in Greece in July.) After the beloved sea sponge loses his job at the Krusty Krab in the underwater city of Bikini Bottom, SpongeBob slips into a slovenly depression. His friend Patrick, a starfish, tries to teach him the benefits of “glorious unemployment“—as in free time and free food. “Unemployment may be fun for you, but I need to get a job,” the determined and eager SpongeBob tells Patrick.

And with this, conservatives found themselves a new star. “‘SpongeBob’ Critiques Welfare State, Embraces Self-Sufficiency,” the Breitbart headline reads. “Lest he sit around idly, mooching off the social services of Bikini Bottom, a depressed SpongeBob sets out to return to gainful employment wherever he can find it,” Andrea Morabito wrote at the New York Post last week. “No spoilers—but it’s safe to say that our hero doesn’t end up on food stamps, as his patty-making skills turn out to be in high demand.” Fox News personality Heather Nauert had a similar take about SpongeBob not “mooching off social services”:

Contempt for “moochers” (recall Mitt Romney’s 47 percent comments) on food stamps is a popular conservative meme. But life for the unemployed or welfare recipients on the brink of poverty is far from “glorious.” The sponge-related coverage from Fox prompted MSNBC‘s Al Sharpton to stick up for poor Americans. “The right-wingers found a new hero in its war against the poor,” Sharpton declared. “SpongeBob SquarePants. That’s right. SpongeBob SquarePants…So a sponge who lives in a pineapple under the sea doesn’t need government help. That means no one does?”

Nickelodeon declined to comment on the political firestorm caused by SpongeBob’s aggressively anti-funemployment message. But Russell Hicks, Nickelodeon’s president of content, development, and production, did say in a statement that, “part of SpongeBob’s long-running success has been its ability to tap into the zeitgeist while still being really funny for our audience.”

But conservatives’ newfound love for the food-stamp-refusing SpongeBob conveniently glosses over the his green, liberal, and notoriously gay past. Fox News has previously attacked SpongeBob for brainwashing children on the issue of global warming. Christian-right groups have targeted the giddy sponge over his alleged gay proselytizing. Ukraine’s National Expert Commission for the Protection of Public Morals announced a special session in 2012 to review a report by a right-wing religious organization that refers to the cartoon’s “promotion of homosexuality.” Furthermore, the series has enthusiastically supported workers’ rights, has been harshly critical of corporate takeover, and is generally pro-environment.

But SpongeBob likes to work! Which is exclusively a conservative value in the eyes of some.

Here is a clip from “SpongeBob, You’re Fired!” via the Hollywood Reporter: